Fascism: Where it came from and the tacit support it received from prominent figures 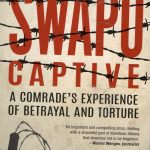 A SWAPO comrade’s experience of betrayal and torture

Garfield Todd – The End of the Liberal Dream in Rhodesia, by Susan Woodhouse

The story of Garfield Todd in Central Africa starts in 1934. At the age of 26 he and his 23- year old wife, Grace and their adopted daughter, Alycen, came…   Read more >

Kingdom, Power, Glory – Mugabe, Zanu and the Quest for Supremacy 1960-1987 by Stuart Doran

IN THE PREFACE to ‘Eminent Victorians,’ Lytton Strachey issued a warning that resonates with writers, historians, journalists and members of the public trying to make sense of post-Mugabe Zimbabwe. He…   Read more >