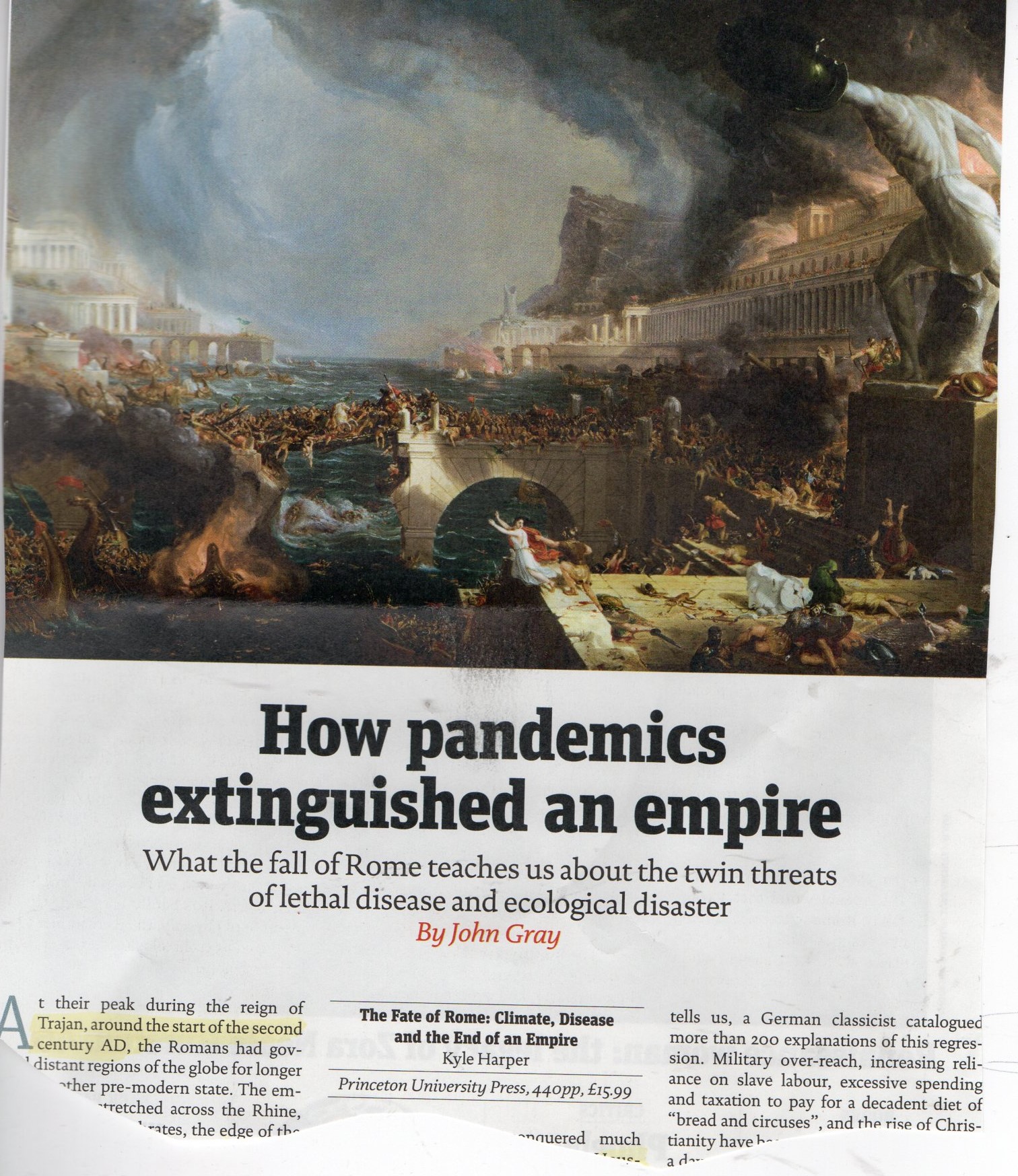 John Gray is as close as Britain will get to having a public philosopher in the 2020s.

Son of a docker turned carpenter in South Shields, county Durham, he is one of the most widely respected academics in the UK, the USA and Europe.

His review of a new book published by Princeton University Press The Fate of Rome: Climate, Disease and the End of Empire by Karl Harper should be recommended reading for the Conservative MPs who bounce around Boris Johnson and Dominic Cummings like a group of luvvies on speed while tweeting messages to one another on  subjects they know next to nothing about.

At a time when everyone with half a dog collar around their neck talks about a brave new world coming out of a global disaster the words of John Gray are like rain after drought.

How Pandemics extinguished an empire and what the fall of Rome teaches us is the heading over a review by Gray of Harper’s book in a recent edition of New Statesman. 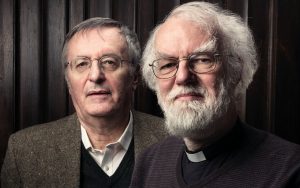 The atheist and the Man of God.

John Gray with the former Archbishop of Canterbury,

Harper writes that the fall of Rome may have been “the single greatest regression in all of human history.”

Edward Gibbon thought so and partly  blamed the rise of Christianity for its fall.

But there were other reasons and they include military over-reaching, increasing reliance of slave labour, excessive spending and taxation to pay for a decadent diet of “bread and circumstances” to keep the plebs happy and harmless, the empire’s rulers greedy and gormless.

As everyone knows, Rome did not fall in a single day.

But nearly all standard histories put human agency at the heart of the story, when the deciding factor may not have been human at all.

Gray writes that among the casualties of the Roman collapse was a classical, an over-arching, view of the world.

At that time, Stoicism was a system of thought embraced by Roman aristocrats and administrators. 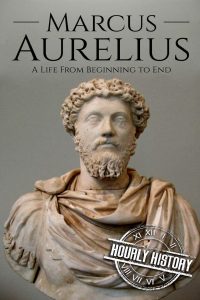 Wisdom, was achieved by identifying oneself with an unchanging natural order and Gray explains that in this view there could be no new evils, no novel diseases for which humanity was not ready to face, challenge, overcome.

A virtuous civilised way of life could be achieved by emulating a national and harmonious universe.

But a succession of pandemics shattered this world-view. 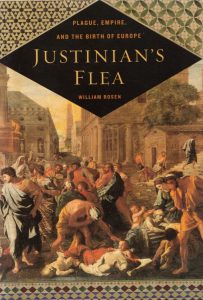 The Antonine Plague began in c165 and peaked around 180 when witnesses reported as many as 2,000 people dying in Rome every day.

Death throughout the Empire ran into millions.

Gray tells us that while struggling to make sense of this catastrophe, which mocked his faith in the cosmos, the philosopher-emperor Marcus Aurelius (120-180) fell back in his Meditations on the Stoic practice of trying to live each day as his last.

Then, in the mid-third century Rome was shaken again, this time by the Plague of Cyprian. 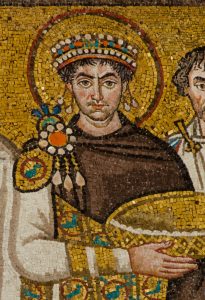 In c.542 a devastating outbreak of  Bubonic Plague

known as the Plague of Justinian ( above) swept across

the Roman Empire, killing millions on its way.

By the time of Gregory and the catastrophic Justinian Plague – a bubonic plague on the same scale as the Black Death in the 14th century – the natural world had come to be seen as chaotic and antagonistic to humankind.

“A febrile cult of the god Apollo, while Christianity received a boost without which it might not have gone on to be adopted as the failing empire’s state religion,” says Gray.

Writes Harper – “By its nature, Roman civilisation seemed to unlock the pestilential potential of the landscape. The expansion of agriculture brought civilisation deeper into habitats friendly with the mosquito. De-forestation facilitated the pooling of water and turned the forbidding forest into fields where mosquitos more easily multiplied. The Roman were environmental engineers extraordinaire.”

In the same way that the British Empire opened up the world, the vast reach of Roman power exposed vulnerable populations to infections from the furthest reaches of the earth. 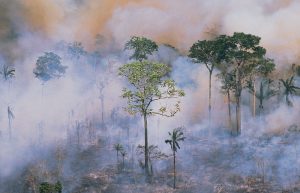 Gray remarks -“Infection entered Rome via far-flung trade networks and flea-ridden rodent populations that thrived in grain stores. With human populations higher than ever before, large populations were crowded together in cities. Tuberculosis, leprosy and a formidable array of fevers were endemic. The vast reach of Roman power exposed these vulnerable populations to infections from the furthest reaches of the Earth. The Roman plagues were a by-product of an early experimentation in globalisation. The possibility and eventual inevitability, of pandemics was wired into the structures of imperial Rome at the height of its power.”

And – ”When they built their grand edifice the Romans could not have known that they were also creating an environment in which diseases could spread as never before and they had no understanding of the climate changes that were under way. Still less could they have known that a conjunction of the two would lead to the destruction of their world. It is hardly surprising that by the time of Gregory, the Roman mind was unhinged by eschatological fears and apocalyptic religions.” 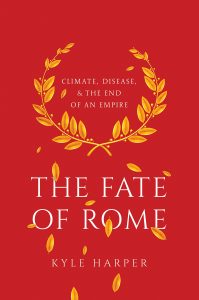 John Gray believes that Kyle Harper, a professor of classics and letters and the senior vice-president and provost at the University of Oklahoma, has given us a book that will be of urgent interest to people struggling to adjust to a disruption in their experience, one unlike any they have known before.

He says that the book (published in 2017) is the “revelatory successor of Edward Gibbon’s Decline and Fall of the Roman Empire  (which was published in 1776} because it presents an interpretation of one of history’s turning points that is both mind-opening and salutary.”

Gray  moves his attention from then to now, believing that conceivably Covid-19 may not turn out to be  as deadly as some earlier viruses.

But there are disturbing similarities between the end of the Roman Empire and what’s happening now.

Writes Gray: “It is not only that Covis-19 appeared during a time of peak globalisation, with tightly stretched supply chains that had little resilience to shocks. The virus has also emerged against a background of large-scale environmental engineering. In an ominous twist of the Malthusian dynamic, humans are expanding into and swiftly degrading regions such as the Amazon that were previously lightly inhabited by hunter-gatherers. As these areas are turned over to agriculture, local ecologies are severely disturbed. Wilderness is fast vanishing and as it retreats animal-borne infections jump more easily to humans.”

And as in ancient Rome, the pre-Covid 19 global world was wired for pandemic. 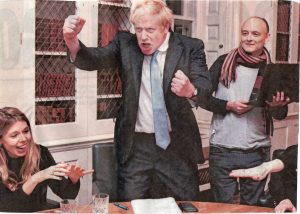 wanted to concentrate on getting done with Europe, not

on  epidemic that is now on its way of claiming almost

half a million lives worldwide.

Says Gray: ”It is the impact of the virus on prevailing belief systems that suggests the most intriguing parallels. Just as the combination of climate change with pandemics undermined a ruling classical world-view, the virus has shaken the modern faith that humankind can re-shape the world as it pleases. The very idea of nature as an insuperable constraint on human ambitions has become heretical. For many, it seems, nothing really exists apart from human thoughts and feelings. Serving no human purpose, the virus is a deadly threat to this solipsistic modern faith.”

Until  few months ago, our arrogance matched our ignorance about pandemics. 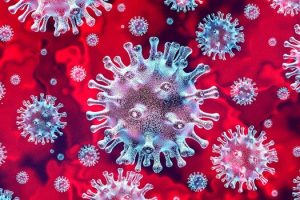 In an interview recently, Sir David King, Britain’s chief scientific adviser in  2001, said that Boris Johnson and Dominic Cummings, his special adviser, viewed the pandemic as a “distraction” from Brexit.

The South Africa – born scientist told Tom Whipple (The Times 27 June, 2020) that had Boris Johnson gone into lockdown a week earlier (it came in force on  March 23) “then we would have probably had a quarter of the  deaths we have now. ”

Harper explains that there are maybe a trillion microbial species in total; the average human lumbers around bearing 40 trillion bacterial cells alone. “They have been here for some three and a half billion years. It’s a microbe’s world – we ‘re just living in it.” 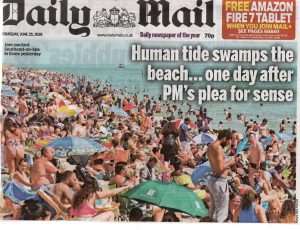 and this was taken a week before the pubs opened again.

Here in Britain on July 4 (next Saturday) the pubs, restaurants, hotels and holiday resorts re-open.

Millions of people are already behaving like wolves on heat.   That won’t worry the virus.

As Gray says- “For the virus, all sections of society are targets and all mass gatherings super-spreader events.”

One example paints the picture. 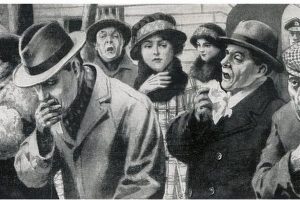 On September 28, 1918, while the First World War was still going on, the City of Philadelphia staged a grand parade to support the war effort.

Around 200,000 people crowded together in Broad Street to cheer on the marchers and among them were war enthusiasts with a particularly strong flu virus.

The so-called Spanish flu went on to kill upwards of 50 million people around  the world.

And then these slightly re-assuring words from John Gray, a former Professor of Human Thought at the London School off Economic and Political Science.

“The pandemic has no pre-ordained trajectory and because of our vastly superior medical resources is very unlikely to follow the catastrophic path of its predecessors in  Roman times. Instead, it poses a question. Human knowledge has increased tremendously but are we so much more reasonable than the Romans were at their peak? Or are we descending into a state of collective derangement, far more rapidly than they did? The answer may begin to be clear over the coming months.”