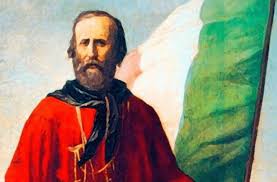 Garibaldi is best known for his invasion and conquest of Sicily in 1860 and his life-long fight for Italian unity. Not so well- known is the way he spent over twelve years of his life fighting tyranny in South America.

GARIBALDI IN SOUTH AMERICA – An exploration by Richard Bourne (Hurst and Company, 2020 pp. 240)

Giuseppe Garibaldi (born in Nice 1807 and died on the island of Caprera, north of Sardinia in1882) was one of the greatest liberal, patriot, hero and soldiers of the 19th Century.

He was a hero of two continents, an international celebrity, and a political pop star long before the face of Che Guevara appeared on millions of student  t-shirts during the uprisings in Paris in 1968.

Remembered by most as the man who landed and led 1,000 red shirted followers during the siege of Sicily and then Naples in 1860, Garibaldi was offered a military command by Abraham Lincoln during the American Civil War.  Then the Confederates came up with a bright idea – to make Garibaldi a general if he would fight for slavery and the southern states. Fortunately for Italy and Europe, he did neither.

In 1864 he was given a triumphal reception in London. 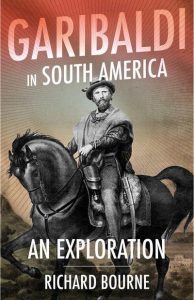 Garibaldi was a great lover  . . . of Italy in the womb and of women, three who he married leaving almost a football team of children to keep his name alive.

His first wife Anita (who he carried off with him in southern Brazil in 1839) was his fearless companion during war and peace.

Mother of four of his children, she died of a fever in Italy in August 1849.

Garibaldi is a hero of West European liberals and revolutionaries.

Born in Nice, son of a merchant shipman, he spent much of his youth sailing the Mediterranean. Soon he was caught up in the nationalist movement –the Risorgimento – that put red shirts on the backs and guns into the hands of tens of thousands of young Italians who wanted rid of the Austrians and Roman Catholics who ruled various states.

Garibaldi was one of the first to realise the power of the Press which played so vital a role explaining the Crimean and American Civil War to the reading public and which, almost overnight, turned fighting men into living legends.

In November 1833 he met Giuseppe Mazzini in Genoa and was spellbound. He joined the Carbonari, an informal collection of secret societies dedicated to ousting Italy’s self-imposed tyrants.

In 1833 he participated in a failed Mazzini-inspired insurrection in Piedmont and a court sentenced him to death.

He fled to Marseille then went to the Beylik of Tunis before finding his way by boat to the Empire of Brazil where he took up the cause of the Rio Grande do Sul Republic in its attempt to separate from Brazil in 1835.

In Rio he joined a branch of Young Italy (and a local branch of the Freemasons) and was radicalised by young Italian revolutionaries who had made Latin America their exile base.

After helping to attack and take Laguna in 1839, he met the woman who changed his life and after her death lived on as a memory and then a legend.

Anna Maria Jesus de Ribeiro, commonly known as Anita, left her husband and eloped with the bearded, handsome Italian. She was his partner in war and a mother of our children, the first of Garibaldi’s three wives.

It was Anita who taught him to ride horses, wear red shirts and dress like a gaucho.

Their lives  were extraordinary and Bourne tells their story well before going on to 1842 when Garibaldi took command of the Uruguayan fleet and raised at Italian legion – known as Redshirts – to fight during that country’s civil war.

Bourne writes:”In his lifetime he was a legendary figure. But the origins if his actual achievement did not lie in Italy. They were in South America. He spent over twelve formative years, from the of twenty eight until he was nearly forty-one  in the southern part of the continent, roughly a third fighting for the breakaway republic of Rio Grande do Sol against the Brazilian emperor, and two-thirds battling for Montevideo and its Gobierro de la Defensa in a lengthy civil war in Uruguay.

“The Canadian-born press baron, Lord Beaverbrook, once said that anyone who would go on to do anything significant in life would have shown signs already in their twenties. This was certainly true of Garibaldi. His time in South America saw how an adventurer with a commitment to Italian unification through membership of the Young Italy movement could harden into a skilled and charismatic commander able to weld un-military volunteers into forces capable of overcoming adverse odds, on land and water.”

Recruitment was possible because of a substantial Italian presence in Montevideo – young and old Italians in exile with a longing for freedom throughout Latin America and, of course, in Italy.

The 19th century historian George Macaulay Trevelyan wrote: “The moral power of his personal presence, the smoldering fire that kindled in those small, deep eyes, the melody of that low, appealing voice, were his weapons that made up for artillery and good rifles and military training and steep, entrenched positions.”

The author Lucy Riall (“Garibaldi: Invention of a Hero” Yale University Press, 2007) has written that Garibaldi’s life and experiences in South America are among the least known and most mythological of his career.

So three cheers for Richard Bourne who has filled in some black pages, rather like the explorers in Africa who risked their lives but gave us maps.

Bourne, a respected commentator on Commonwealth as well as South American affairs, succeeds in vividly describing what Garibaldi did during these formative years, what he learnt and brought with him back to Europe, what happened after he left South America and how he and Anita are remembered in South America and Italy.

He adds: ”In a depressing era of identity politics and narrow nationalism in the twenty –first century it is inspiring to recall a man who risked his life for two small republics in peril, who was an internationalist, a fighter against absolutism and the freedom of thought of people and of individuals.”

The reasonably short and easy to read book with a decent map and colour pictures is in four parts starting with Garibaldi’s journey from Nice to Rio de Janeiro, moving on to his return to Italy. It repeats, once again, details about this man’s contribution to Italian unity with Rome becoming its capital in 1871 to his death on Caprera on June 2, 1882 after suffering from arthritis which plagued him after receiving wounds during campaigns in South |America as well as Italy.

Garibaldi has never been short of admirers. But few, before Richard Bourne, have written about his formative years in South America.

And this is not just a great adventure story. It’s a love story, too.

Bourne writes so well about Garibaldi’s relationship with Anita who, in some romantic eyes, is almost as great as the husband she loved so much and served so well.

The world is always in search of heroes.

But however much we admire Garibaldi (and Bourne is obviously a huge fan) it’s hard to go along with the English historian A.J.P. Taylor who called the Italian warrior “the only admirable figure in modern history.”

At the 1907 centenary of Garibaldi’s birth the Italian ambassador to the United Kingdom said: “Legend is sometimes as truthful, at least in its spirit, and almost always more powerful abs efficient than history, because it influences for centuries the mind, the feeling and the action of a nation. Garibaldi, who fought in two continents for liberty and independence, will perhaps in the distant future be considered, not as a real and living individual, but as the mythical and legendary personification of a period of history – of that period of history which was almost everywhere dominated by the great struggle for liberty.”

But legends belong to friend and foe alike.

Benito Mussolini, who so admired Garibaldi and his Red Shirts was surprised to learn that one of the international brigade groups fighting his soldiers on the side of Franco in the Spanish Civil War were Italian socialists and communists who fought under the banner of the Garibaldi Battalion.