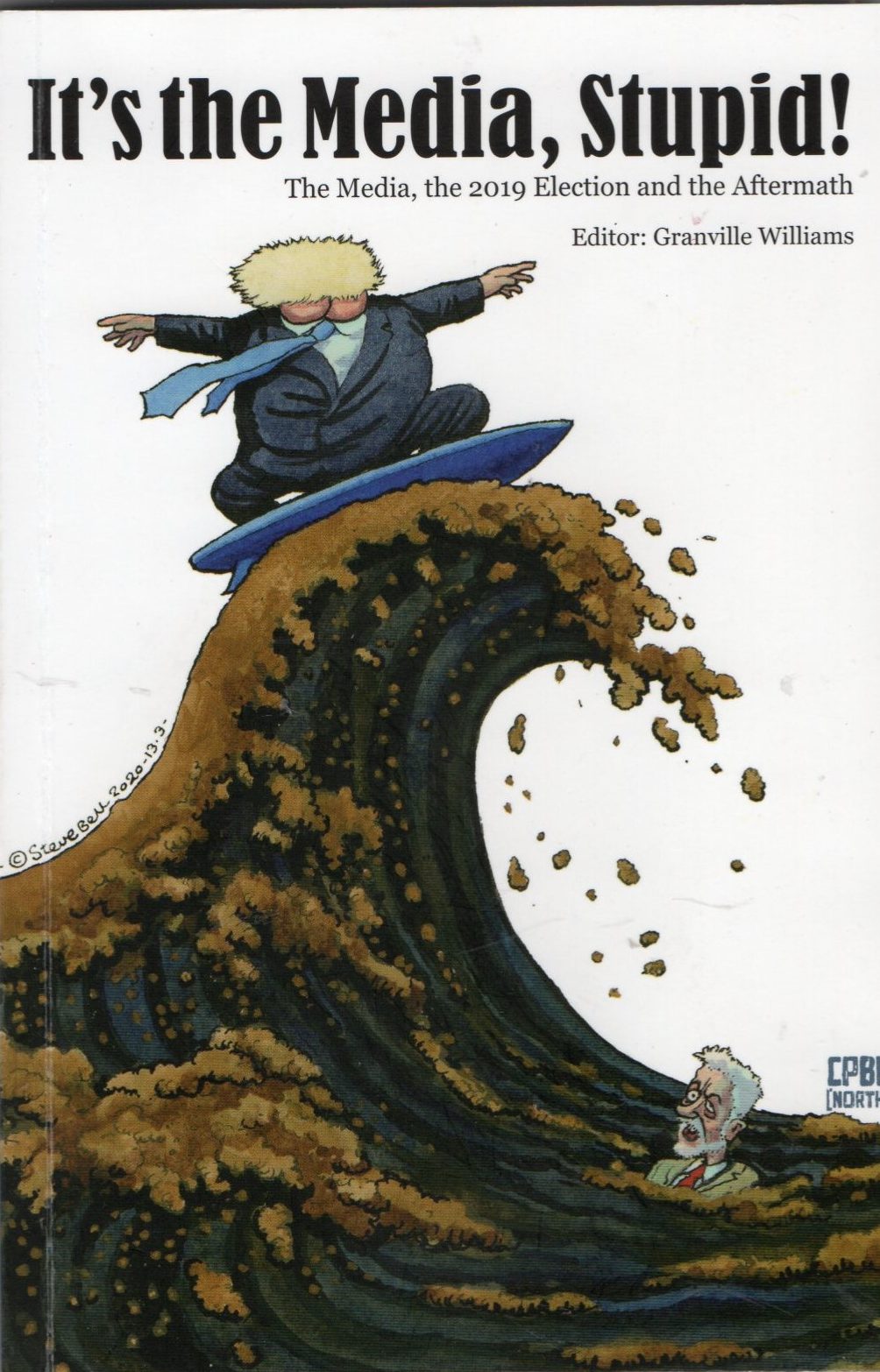 In his seminal book In Defence of Politics, the late academic Bernard Crick wrote:”Boredom with established truths is a great enemy of free men.”

He wrote that in 1962. It could have been written yesterday.

The Edinburgh-based socialist said the purpose of his book was to try and restore confidence in the virtues of politics as a civilizing human activity, saying that “politics, like Antaeus* in the Greek myth, can remain perpetually young, strong and lively so long as it can keep its feet firmly on the ground of Mother Earth.”

(*Antaeus was the son of the gods Poseidon and Gaea in Greek mythology. He drew his strength from his mother, earth, and was invincible while he was in contact with her. He challenged people who passed by his area to wrestling watches and always won, as long as he kept both feet on the ground.)

In other words, in politics stick to where you come from and know where you belong.

It’s the Media, Stupid! –The Media, the 2019 Election and the Aftermath edited by Granville Williams of the Campaign for Press and Broadcasting Freedom (North) should be praised the having a similar aim as  Crick’s  –  to restore  confidence in opposition politics.

This is a short, important book, one that should be read by socialists wanting to know what the hell went so wrong for Labour, and so right for the Conservatives, in December 2019

The book’s foreword is by James Curran, Professor of Communications at Goldsmiths College, University of London.

In it he says: “Here we are in the wake of a catastrophic Labour defeat. In 2019, the Labour Party sustained the second largest drop in its poll share since 1931. It has now the smallest number of MPs since 1935. The cross-class coalition that sustained Labour’s rise is now fractured and will be difficult to repair.”

He goes on: “British people’s trust in the British press is now even lower than that of Serbians in their press, while trust in British broadcasting has fallen below the EU average. “

This reminded me of what Dorothy Byrne, Chair of the Ethical Journalism Network, had to say about the state of Britain and its media at the Edinburgh Festival last year.

First, a general election where the two main parties were led by men who were out- of- touch with grass roots opinion.

Secondly, what to do if a confirmed liar was installed as prime minister.

“Isn’t it time,” she asked, “for us to start using the ‘L’ word (liar). I believe that we need to start calling politicians out as liars when they lie. If we continue to be so polite, how will our viewers (on TV) know that politicians are lying?”

Were Johnson and Corbyn listening?

They should have been.

This book’s origins are interesting.

When the 2019 general election was called on October 30, 2019, Media North decided to produce “watchdog” magazines (six in all) called ElectionWatch. Their job was to monitor the way news was handled.

Much of what the magazines had to say is repeated in this new book about the media and several of its contributors  record their anguish at the way Corbyn was treated by newspapers that included The Times, the Sun, the Daily Express, Daily Mail and Mail on Sunday, The Guardian and also the state broadcaster, the  BBC.

But why the surprise? Why the shock?

The moment the election was announced the opponents of anyone who wasn’t for Boris Johnson, became the enemy.

The condemnation of Corbyn was predictable. The way Corbyn and his advisers retaliated was little short of pathetic.

Corbyn’s failure to explain his position on Jews, Zionists, Israel and his commitment to a non-racial Britain and its defence is extraordinary, perhaps the subject for another short, punchy book like this one.

It was as if a group of arrogant Labour Party advisers had gathered behind closed doors – “Look, we’re the antennae of the masses. No-one will believe these arrogant right- wing, out of touch media billionaires. We have our feet on the ground. We are the masses. We know what they think because they are us and we are them.”

How wrong they were.

The election was followed by a one- day conference in Leeds (February 2020) organised by the Campaign for Press and Broadcasting Freedom (North) in order to expose what the Morning Star (Communist)  saw as the links between the right-wing press, the BBC and politicians which “undermine Britain’s democratic process through the mass spreading of propaganda and outright lies.”

Now here is the book that came out  of all those meetings and all that talk.

Labour militants can cry if they want to and hold further talks if they have to. But unless there is some form of new united front they’ll get nowhere.

To find out why so many traditional Labour voters swung to the Tories is needed urgently. And young men from England’s most expensive private schools might not be the right ones to do the job which requires listening to the voices of ordinary men and women in some of the poorest parts of the UK.

It becomes clearer by the day that the majority of working class Northerners voted for Johnson because they felt let down by Labour and confused by Corbyn.

Several of the authors make that abundantly clear. It is to their credit that they’ve stopped worshipping Corbyn and started to examine what went wrong under his watch.

Traditional Labour Party voters were unsure about Corbyn’s attitude towards Europe and Brexit.

They were startled about claims Corbyn was anti-Jewish.

They were bewildered when presented with a policy documents that might be acceptable to graduates doing PhDs but hard to swallow if you were an ordinary Joe in Blyth. Whitley Bay, Seaton Sluice, Ellington Village or Morpeth.

Get Brexit Done. Take back control

Three word slogans are not policy. But they’re comforting when the masses are leaderless, confused and maybe above all  . . . bored with established truths.

The most senior advisers to both Boris Johnson and Jeremy Corbyn during the 2019 election were Wykehamists. Winchester College prides itself for turning out well-mannered “trusty servants” like Dominic Cummings (Conservative) and Seamus Milne (Labour)

This book is edited by Granville Williams whose call is for all Labour reform groups to get together and work as one. “The danger is, if we all go off and do our own thing, we will dissipate our effectiveness.”

It is well-illustrated with 16-pages of full colour pictures of the front pages of various British papers during the build-up to the election.

It’s a work worth buying, reading and handing on to the growing number of people in the former Red Walls of Northern England, men and women who might soon be hard-pressed to find a pnenny under a tenner for a book.

For me, one chapter is outstanding and it’s Nicholas Jones’s The Vilification of Jeremy Corbyn.

Time and again the media reminded us that Corbyn had friends in high terrorist places.

The charges were reinforced when the ex-boss of MI6 Peter Dearlove joined in the chorus of abuse and indicated Corbyn could not be trusted with state secrets.

But the hardest blow came from the Chief Rabbi Ephraim Mirvis on the same day that Labour released its lengthy policy document and the Muslim Council of Britain issued a scathing attack on Islamophobia in the Tory Party.

He accused Labour of harbouring rampant anti-Semitism and indicated that Jeremy Corbyn was doing nothing to stop it.

Then Andrew Neil, who made his name as editor of Murdoch’s Sunday Times and who earns £200,000 a year from the BBC and who is chairman of the company that owns the right-wing  Spectator magazine, climbed in and virtually crucified the Labour leader  on television for refusing – four  times – to  say sorry to Britain’s 280,000 or so  Jewish members.

I did not know and was pleased to learn that long before the Daily Mail and other papers climbed aboard the ‘Corbyn is a closet anti-Semite’ bandwagon the Jewish Chronicle of August 14, 2015 carried an editorial expressing concern that there was anti-Semitism in the Labour Party.

Jones says: ”An editorial expressed ‘deep foreboding’ at the prospect of his election as Labour leader although there was ‘no direct evidence of his association and support for Holocaust deniers, terrorists and some outright anti-Semites.’ ”

Jones writes: “His failure to address the Jewish Chronicle’s challenge that summer and his own subsequent ineptitude and that of his aides in tackling the party’s crisis over charges of anti-Semitism, would open the floodgates to a virulent press campaign that tarnished Labour’s name throughout the build-up to the 2019 election. In the face of the hostile media environment he was up against there were steps that he could and should have been taken in 2015 to mitigate the damage, but the chance was missed.”

Jones – no friend of the Tories – speaks about Corbyn’s “personal ambivalence” towards EU membership and how that confused voters in Red Walls who were seduced, misled, conned and lied to under that so often repeated mantra  Get Brexit Done.

It was a slogan that warmed the hearts of hundreds of thousands of men and women who felt they had been side-lined by the party they once supported.

How long Bouncy Boris will stand with two feet rooted in the grounds of Northern England (or anywhere else considering his dismal handling of the Covid-19 pandemic) remains to be seen.

Leading newspaper columnists are turning on him – and fast.

The former Conservative MP Matthew Parris said in The Times (May 9, 2020) that Johnson must end his “ blustering talk” and get on with the job of leading Britain. He asks – “Can you remember any big event of government he has ever tackled and sorted?”

The Guardian’s John Crace went harder in his criticism of the man increasingly referred to as the Prime Minister of England, rather than the United Kingdom.

“Boris” he said  on May 11, 2020, “is deep down a coward, a man who runs from the first hint of personal responsibility . .  .”  a reference to the Covid-19 pandemic which this government is handling so ineptly.

Johnson is about to learn the truth of what Oscar Wilde’s said so long ago –  “a halo doesn’t have to fall far to become a noose.”