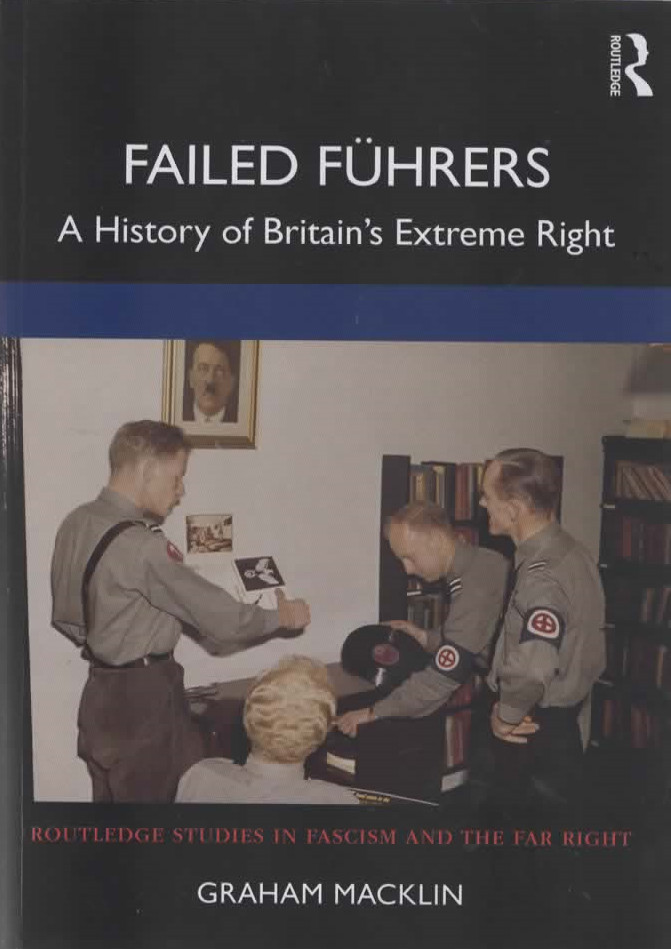 “Some day, in the not too distant future, when the trade unions are being particularly tedious, students are being unusually destructive and the pound is buying less and less, then a Fuhrer will appear and tell the British they are a powerful nation. ‘Britain Awake’ will be his slogan and some carefully chosen racial minority will be his scapegoat. Then you will see if the British are easy to regiment.”  – Len Deighton – “Bomber” (1970)

There’s an on-going belief put forward by people who live in storm-proof bubbles that fascism could never take root here in the UK.

The well-plugged myth says that we are a tolerant lot on this little island, ever ready to pick-up an opponent, dust him or her down, and start all over again.

The line was certainly pumped into children of my generation. How often I heard as a child in Church of England (Anglican) schools that the British are too balanced, too sensible and too mature to fall for that kind of paraphernalia, with all those charismatic leaders, uniforms, drums, jackboots, street marches, and violence.

So, three cheers for Gerald Macklin, the Oslo-based academic and author who asks us to take another look at the little known activities of fascists in the UK during the 20th-century and the opening decades of this one.

Drawing on extensive archival research and often obscure primary texts and propaganda material as well as official records from British government archives and its secret services M15 and M16, Failed Fuhrers has been hailed by Macklin’s intellectual peer group as “the definitive historical account of Britain’s extreme right.”  In other words, it’s essential reading for all students and scholars of race relations, extremism and hate.

The book charts the evolution of the extreme right from what, at first sight, appears to be its genesis after the World War I (1914-1918) to present-day incarnations. The author focuses on the careers of six men whose names and careers have, until recently, been almost airbrushed out of the British story. They were all fanatics, driven by comforting racial delusions:

Arnold Leese (1878-1956), a world authority on camel diseases, who believed that the Jews are taking over the world with the aid of Karl Marx’s  Das Kapital in one hand and the Protocols of the Learned Elders of Zion in the other. Founder of the short-lived Imperial Fascist League, Leese went to his grave believing that Oswald Mosley was a Jew financed by Jews to stop he emergence of ‘real’ Fascism in the UK. 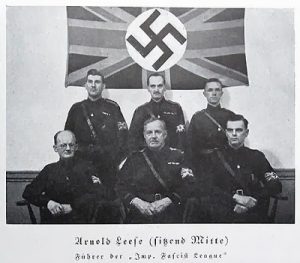 Sir Oswald Mosley (1896-1980) is the best – known of all the failed fuhrers. One of his more adventurous 16th century ancestors organised a privateer fleet against Spain and, as a reward, was knighted by Queen Elizabeth1. Mosley – whose first father-in-law, Lord Curzon, also suspected Mosley was a Jew –  was tipped to be prime minister in waiting after entering the House of Commons as its youngest member after World War I. He founded the British Union of Fascists in 1932 and put his followers into black-shirts as he pulled on his jackboots. He took substantial sums of money from both Mussolini and Hitler. Mosley spent a large part of World War 2 in prison under the hastily imposed Regulation 18b.  He re-formed after 1948, and became a leader of the Union Movement. He died in luxury at his home – the Temple of Glory – outside Paris in December 1980 and is now considered a father figure of fascism to fellow travellers in Europe, especially Italy. 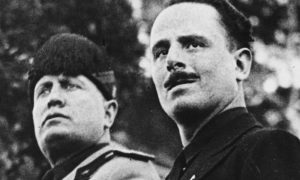 Benito Mussolini with Oswald Mosley in 1933

at a Fascist parade in Rome.

A.K. Chesterton (1899-1973) the nephew of the famous author G.K. Chesterton and an early supporter of Oswald Mosley. He wrote a book about Mosley, Portrait of a Leader, but went on to refer to his former hero as “The Bleeder,” because of the way Mosley used, and then discarded, anyone with ideas that challenged his own. Chesterton, a middle class academic turned activist, was another screaming anti-Semite and a founder member of the National Front (NF), which attracted flash-in-the-pan support from what Marxists called the déclassé in parts of the UK in the 1960s and 1970s. 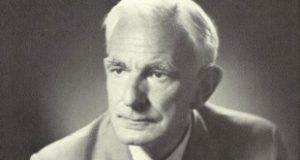 A.K. Chesterton- An imperialist who mocked

Colin Jordan (1923-2009), another wannabe British Hitler, was often photographed doing the Nazi salute with his French (very wealthy) wife whom he stole away from a Fascist colleague 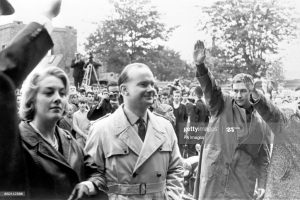 John Tyndall (1934-2005), a Mosley sound-alike who spent a large part of his time expelling anyone who threatened his leadership of one of a myriad of small and largely inconsequential  groups he led. 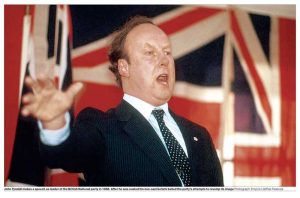 Nick Griffin (1959- ), who was educated at Cambridge and who purged his British National Party (BNP) of anti-Semites and replaced them with Islamophobes. In 2009, two BNP candidates, one of whom was Griffin, were elected to the European Parliament. They lost their seats in 2014 when the BNP vote was transferred en masse to UKIP, an anti-immigration and anti-European Union group led by Nigel Farage. 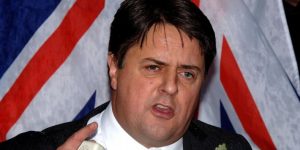 Mosley is the only one of them with real presence and stature.

His was the template that shaped the tiny organisations the other failed fuhrers founded, while from France, he mocked them as “dwarfs standing in the jackboots of giants”.

Macklin has already written about Mosley after the Second World War, in a book called Very Deeply Died in the Black: Sir Oswald  Mosley and the Resurrection of British Fascism after 1945. In this latest effort, he has little new to say about Mosley, but he does drop in quotes from ancient M15 operatives who claimed to have infiltrated Mosley’s BUF.

Mosley told his senior people that he knew all the names and one of them, he said, was W.E.D Allen, a former Ulster MP, who wrote a flattering book about him under the name James Drennan. Mosley said he had nothing to hide, so why worry about people boasting they’d infiltrated his organisation? 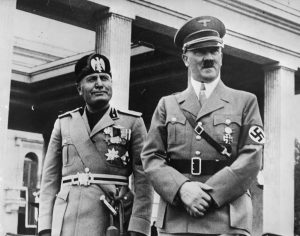 The men so many  British failed fuhrers tried to emulate.

So, at the end of the day, Britain’s six failed fuhrers didn’t amount to much.

But it would be a mistake to totally dismiss their ideas. Macklin shows that the League of Empire Loyalists was close to the right wing of the Conservatives Party before the war. And because of the unwelcome return of anti-Semitism in so many parts of Europe, there’s a danger that Oswald Mosley will be turned into some sort of cult figure for those with hate in their hearts and bricks in their hands.

The danger is real because Britain faces mass unemployment this year and there is a growing sense of cultural disengagement.

But fascism?  It  couldn’t happen here,could it?

Just re-read the quote from Len Deighton at the beginning of this article and think on  . . .

In the Introduction to Failed Fuhrers, Macklin makes a point that needs closer examination.

He says that it would be wrong to believe that British fascism experienced the equivalent of a virgin birth after 1918. There were, he points out, many pre-war ideological and political tributaries that gradually coalesced into a body of thought that under-pinned what became British fascist doctrine during the early 1920s.

And then this: “Adumbrating the contours of British Fascism’s intellectual antecedents during the Edwardian era – social Darwinism, racism, eugenics, imperialism and jingoistic nationalism to name but a few – is beyond the scope of this study, though it would undoubtedly enhance our understanding of British Fascism’s domestic roots, which are often obscured by claims that this was little more than a foreign import”.

What is needed, he suggests, is a deep probe into the origins of failed British fascism  because  “it is equally important  not to down-play the radicalising effect that the contagious encounter with Italian Fascism and German National Socialism had upon native British fascists. It is perhaps enough to remark at this juncture that the study of British fascism awaits its own Zeev Sternhell, whose work diligently traces ‘proto-fascist’ precursors in pre-1914 France”. 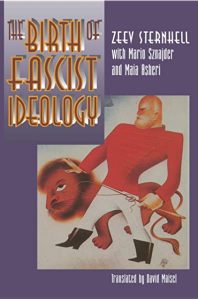 Zeev Sternhell (1935-2020) was the Polish-born Israeli historian whose study of French fascism flabbergasted French intellectuals when they discovered that so many of their  country’s elite were sympathisers, if not uniformed activists.

His book The Birth of Fascist Ideology: From Cultural Rebellion to Political Revolution (Princeton University Press, 1994) has no equivalent in Britain.

A Sternhell-like inquiry into some who gave credence to the fascist mind-set before the Second World War would include some surprising names.

Winston Churchill raising a glass to Mussolini at the Italian and Foreign Press Club in Rome on January 20, 1927 (three years after the murder of the Italian socialist leader Giocomo Matteotti); “I could not help being charmed like so many other people have been, by Signor Mussolini’s  gentle and simple bearing and by his calm, detached poise in spite of so many burdens and dangers. Secondly, anyone could see that he thought of nothing but the lasting good, as he understood  it, of the Italian people and that no lesser interest was of the slightest consequence to him. If I had been an Italian I am sure that I should have been wholeheartedly with you from the start to the finish in your triumphant struggle against the bestial appetites and passions of Leninism”. 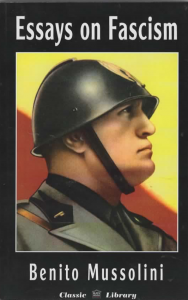 Lord Lloyd, head of the British Council, writing in Rome 1940 in a pamphlet approved by the British Government: “The Italian genius has developed, in the characteristic Fascist institutions a highly authoritarian regime which, however, threatens neither religious nor economic freedom, not the security of other European nations”.

Duff Cooper (Eton College/ Oxford University / Grenadier Guards and member of The Coterie, a fashionable set of English aristocrats and intellectuals, in an article published on November 28, 1938): “Concerning the Abyssinian Episode (Mussolini used various chemical weapons against Africans) the less said the better. When old friends are reconciled after a quarrel it is always dangerous for them to discuss its original causes.”

Churchill (again): “Italy has shown there is a way of fighting the subversive forces which can rally the masses if the people, properly led, to value and wish to defend the honour and stability of civilised society. She has provided the necessary antidote to the Russian poison. Hereafter, no great nation will be un-provided with an ultimate means of protection against the cancerous growth of Bolshevism”.

Lord Rothermere (owner of the Daily Mail and one-time media supporter of Oswald Mosley): “The first meeting between Signor Mussolini and myself took place in the summer of 1924, at a time when the murder of the Socialist Deputy, Matteotti, by a criminally extremist section of the Fascist Party, had, as Mussolini told me, ‘hampered his work.’ The calm strength and self-reliance Mussolini showed then, his set determination to cut out the evil growth that had manifested itself in the Fascist organisation of his creation, were proof unmistakable of his great force of character”. media

(All quotes  in the above are from The Trial of Mussolini by “Cassius,” (Michael Foot, leader of the British Labour Party between 1980-1983) published in 1943 by Victor Gollancz Ltd, London).

An examination of the  ntellectual antecedents of fascism would, as Macklin says, include  studies of  social Darwinism and jingoistic  nationalism. For example – 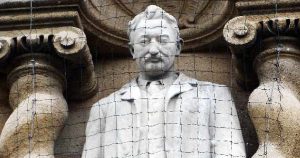 Cecil John Rhodes (1853-1902): “I was in the East End of London yesterday and attended a meeting of the unemployed. I listened to the wild speeches, which were just a  cry for ‘bread! bread‘ and on my way home I pondered over the scene and I became more that ever convinced of the importance of imperialism. My cherished idea is a  solution for the social problems ie., in order to save the 40 million inhabitants of the United Kingdom  from a bloody civil war, we colonial statesmen must acquire new lands to settle the surplus population, to provide new markets for the goods produced in the factories and mines.The Empire, as I have always said, is a bread and butter question.If you want to avoid civil war,  you must become imperialists.”- “Cecil Rhodes and his Time” by Appolo Davidson (Progress Publishers, Moscow) 1984.

Whether a British equivalent of Sternhell emerges from the ranks of this country’s  quite small group of professional fascist  watchers remains to be seen.