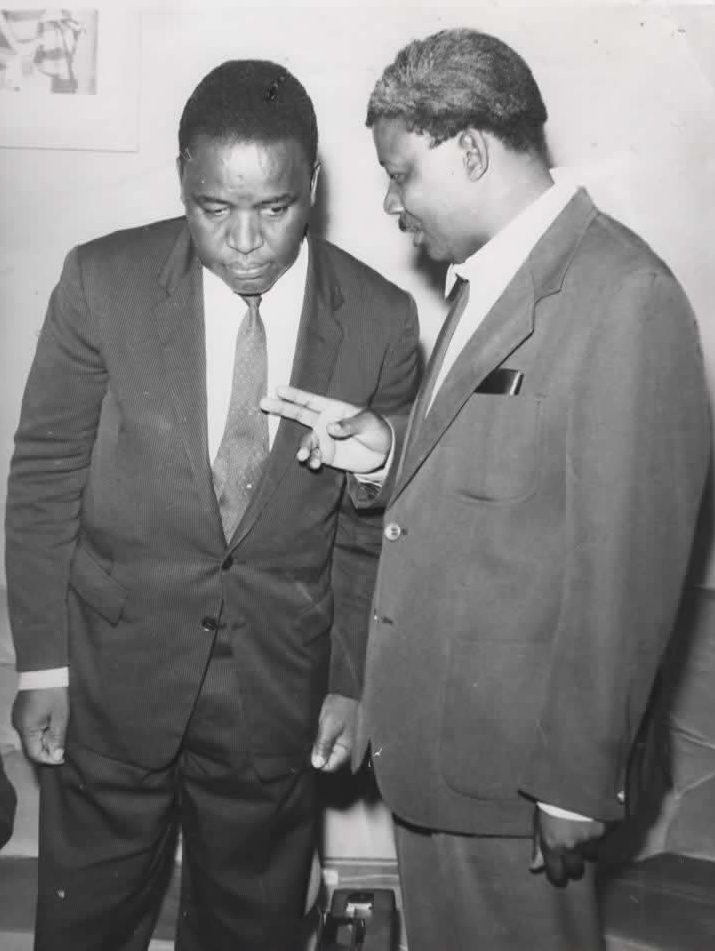 Ndabaningo Sithole with Herbert Chitepo who was assassinated in Lusaka in March 1975. (Picture: Trevor Grundy Archives)

July 21 marks the 100th anniversary of the birth of one of Africa’s greatest men and most significant  architects of Zimbabwe’s Independence – Rev Ndabaningi Sithole.

The 100th birthday of the founder of Zanu will be marked by the launching of the Ndabanini Sithole Foundation.

The launch was originally planned as a get-together event in Harare but because of the spread of the Covid-19 pandemic, it will be virtual and will be hosted through Facebook and Zoom.

A statement from the Foundation’s chairman, the retired Bishop Chad Nicholas Gandiya ,said that the Foundation was established by the family, friends and well- wishers of the late nationalist leader to “honour and perpetuate his legacy as an advocate for civil rights, Pan African democracy, as well as social and economic development in both pre-and-post independent Zimbabwe and Africa at large.”

Rev Sithole was a prolific author who published  twelve books. 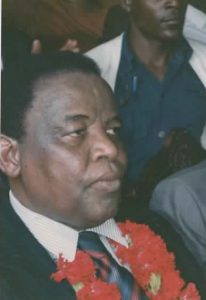 Ndabaningi Sithole after his return to Zimbabwe from America in 1992.(Picture: Trevor Grundy)

He wrote numerous articles, booklets, letters which, says Bishop Chad “collectively provide a frontline perspective of African nationalism, pan – Africanism and the liberation of Zimbabwe. Fortunately for Zimbabweans and fellow Africans alive today and future generations, the Foundation aims to republish the Reverend’s works and share his legacy with the nation.”

His best- known work is African Nationalism. It was first published in 1959 by Oxford University Press with a foreword by Garfield Todd (Prime Minister of Southern Rhodesia from 1953-1958).

At the back of that book under a picture of Sithole are these words: ”Ndabaningi Sithole was born in 1920 and on the day of his birth was made to inhale the smoke from a burning goat’s horn so that no evil should befall him.”

The n’anga who officiated at that ceremony didn’t reckon on Robert Mugabe. 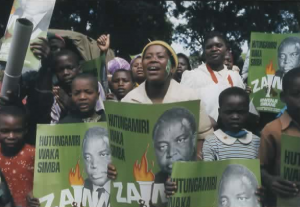 Born in Gazaland on July 21, 1920, Ndabaningi  Sithole  was the son of impoverished parents who sacrificed so much to see their son go to school.

Younger than Nelson Mandela and older than Robert Mugabe, Sithole was one of those larger-than-life men who surprised Westerners with the way he structured his arguments and provided insight into African culture and African aspirations at a time when Britain was retreating from Empire and looking for leaders who were moderate and ready to promote the Mother Country’s economic interests.

Sithole’s book  is seminal and stands alongside other deeply felt works which include Nathan Shamuyarira’s Crisis in Rhodesia, Maurice Nyagumbo’s With the People and Lawrence Vambe’s An Ill-Fated People.

It was a book that helped make Sithole’s name in African nationalist circles and was one of the reasons he was elected president of Zanu when it was formed at the Highfield home of Enos Nkala on August 8, 1963.

For many, it was an African “bible” of hope.

And despite Robert Mugabe’s best attempts to squash anyone who opposed him, Ndabaningi Sithole is today more alive and better regarded that the dead dictator. 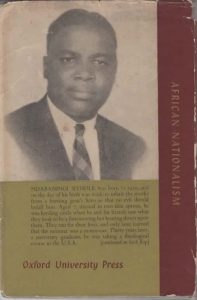 Ndabaningi Sithole in 1959 when his most important book  ‘African Nationalism’ was published.

So many of Africa’s greatest men and women came from a place called Nowhere.

She came from Matabeleland.

His father was an odd-job man, a one- time errand boy for a hotel in Gwelo (Gweru). His name was Jim and he came from Gazaland.

Their son Ndanbaningi was born in a mud hut in Nyamandlovu and in his first and greatest book, Ndaabaningi Sithole tells the story about being made to inhale smoke to ward off evil.

As a child he didn’t wear trousers until he was ten years old. He thought a motor car was a moving cottage. He fled deep into the forest the first time he saw a steam train. He caddied for white golfers at Shabani (Zvishavane) where the family moved for work and later slogged it out as a kitchen hand.

At the age of 15 he ran away from home and with £2 in his pocket was admitted to Dadaya Mission run by Garfield and Grace Todd who recognised the young man’s brilliance, sponsored his education and treated him as a son.

As a teacher he became politically aware and African Nationalism was the result. But it was banned.In those days, only a handful of whites wanted to understand African aspirations.

Sithole was fortunate to have the Todds on his side of the fence.

The foreword to African Nationalism was written by Garfield Todd who said: ”Mr Sithole’s book is especially welcome and valuable at this time because it comes from a young African who has struggled against odds which would have dismayed most men.  African nationalism now clamours for control of multiracial countries such as the Union of South Africa, the Federation of Rhodesia and Nyasaland and Kenya. In our multiracial world, the struggle between European nationalism and African nationalism is watched with deep apprehension and with the  fervent hope that the conflicting forces may yet be aligned behind a new and compelling loyalty to the country instead of the group.”

That was a year before Harold Macmillan’s famous Winds of Change speech in Cape Town . 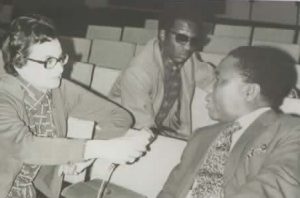 In 1960 the Sharpeville massacre took place in South Africa.

At home in  Rhodesia, the National Democratic Party was formed under the leadership of two other outstanding Zimbabweans, James Chikerema and George Nyandoro.

The NDP was banned and the Zimbabwe African People’s Union (Zapu) was formed and led by Joshua Nkomo.

It was also banned.

In 1963, a rival organisation was formed and Zanu came in to being.  Unwittingly or mindfully (who yet knows?)  it tore apart the  seamless robe of African nationalism.

The consequences of that split were disastrous for millions of people.

In  August 1974, while in Kwe Kwe (Que Que) Prison, Sithole lost the leadership of Zanu and Robert Mugabe emerged as the political front man for the  political wing of Zanu.

A Zanu (Ndonga) advert during the 1980 election which saw the end of Ndabaningi  Sithole as a political challenger and force in Zimbabwe.

Towards the end of 1974, several leading African nationalists were flown from Salisbury to Lusaka for talks with African leaders following the so-called “détente”  between Zambia and South Africa.

Julius Nyerere of Tanzania took one look at Mugabe and asked him who he was.

Mugabe explained there had been a coup in prison and he was the new leader of Zanu.

Nyerere  said: ”How convenient. A coup in one of Smith’s  prisons?”

Mugabe was flown back to Rhodesia and Ndabaningi Sithole was put on a plane and flown to the Zambian capital to take his place.

A few months later (March 1975) the brilliant  Zanu military and political strategist Herbert Chitepo was assassinated. His killers have never been named yet alone located despite attempts by Mugabe to lay Chitepo’s death at the doorstep of racist whites in Ian Smith’s CIO. 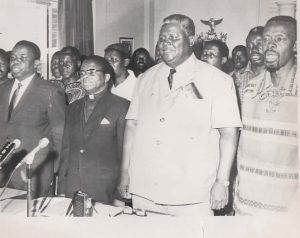 What happened to Ndabaningi Sithole and his small Zanu (Ndonga) party at the election  in 1980 is well known and needs no repeating here.

Sithole left Zimbabwe and lived in Virginia where he became some sort of mouthpiece on African affairs for the right-wing Heritage Foundation.

Let others tell that story. I have none of the details why he did that and to what purpose.

When he finally returned to Zimbabwe in 1992, he was met by a crowd of young men and women who tried to lift their hero onto their shoulders.

They failed. He was too heavy.

Later that day, I asked him if he intended being an opposition leader for the rest of his life. He smiled and said-  “What else is there to do?” 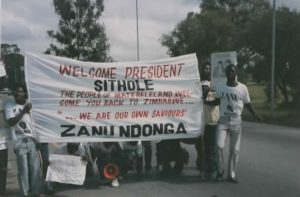 Hundreds of thousands of words have been written about Zimbabwe’s struggle for Independence.

Right now, Sithole is not all that well known among the African young.

But to tell the true story of the struggle for Zimbabwe without highlighting this great man’s contribution is like staging Hamlet without the Prince.

Hopefully, the Ndabaningi Sithole Foundation will change that and put lead into the pencils (or steel in the fingers)  of a new breed of historians, men and women of courage and integrity. 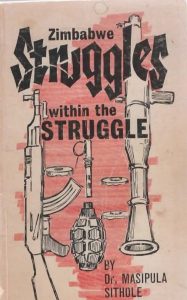 One of the bravest men to widen debate about the in-fiighting among nationalists in Zimbabwe was  Dr  Masipula Sithole,  who dedicated this vital  book  to his brother, Ndabaningi Sithole.

In 1991, the late Dumiso Dabengwa said at a conference in Harare that so many historians had been riddled with “timidity, sectarianism and opportunism.”

The conference, organised by St Anthony’s College, Oxford University and the University of Zimbabwe was attended by well respected historians/activists including Professor Terence Ranger and Jeremy Brickhill.

Calling for a new class of scholars who would withstand  threats and intimidation and who would report the facts with courage and integrity, Dabengwa warned that anything less would lead to “a nation of sycophants and robots.”

Thanks partly to the tireless efforts of “Simbai” Chizengeni (Ndabaningi Sithole’s grandson) the curtain could soon come down on a collection of ham actors who call themselves historians.

There could be no finer 100th birthday present to a great man  that this one – a Foundation to popularise both his achievements (and his failures ) in the interests of clearing the ground for much more research into Zimbabwe’s fascinating but always turbulent past.