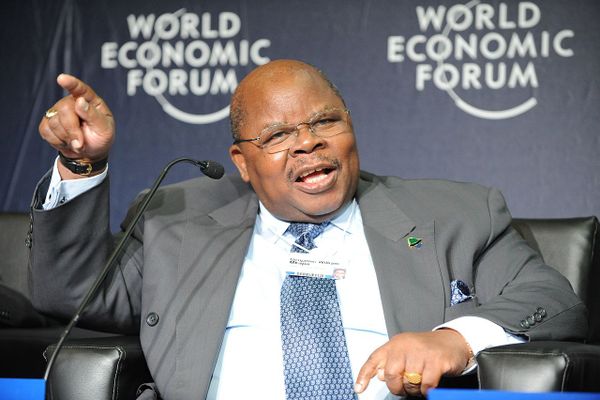 Benjamin Mkapa, the  journalist who left his typewriter to become Tanzania’s  high commissioner in Nigeria, then his country’s foreign minister and finally its third president  has died in Dar es Salaam.

His death was announced last Friday   by President John Magufuli. No cause of death was given.

The president declared seven days of mourning during which flags will fly at half-mast across one of Africa’s once most promsing but toiday one of its poorest and most corrupt.

“I will remember him for his great love of the nation, his piety, hard work and his efforts in building the economy,” Mr Magufuli said in a message posted on Twitter. “Certainly, the nation has lost a strong pillar.”

Ben Mkapa was president of Tanzania from November 1995 to December 2005.

He was the first leader elected after the return of multi-party politics in 1992.

During his tenure, he played a central role in helping the country’s transition from Nyerere’s ill-fated home-grown socialism – known  as Ujamaa -into a fee market (capitalist) economy.

“We recognise that the government has not business on the eve of the 21st century to be in business,” he said a few weeks after coming to power.

Those were words aimed at turning the world created by Julius Nyerere, the country’s founding father figure, upside-down and inside-out.

Mkapa’s aim was to dismantle the Ujamaa system that brought Tanzanian nationals to their knees, making them totally dependent on Western  handouts .

Said Mkapa: ”By withdrawing from direct production activities, the government will have more resources with which to strengthen essential social service, economic infrastructure, human capital development and performance of the traditional roles in  state in particular the maintenance of law and order.”

But while his words were like water after drought for millions of impoverished rural dwellers (80 percent of the 29.65 m. population in 1995) Mkapa’s ten years in power was dogged by allegations of even worse corruption  and mismanagement of public funds.

Mkapa was accused of overseeing mining contracts that benefited him and his family.

Naturally, he denied the allegations but successive governments – all of them controlled by the same party that won independence from Britain in December 1961, have shown unwillingness to investigate and head of state or heir inner circles and network of financial and media  friends.

Mkapa was also criticised by diplomats for spending millions on a presidential jet at a time when the country struggled to reduce deepening poverty levels.

Yet, Ben Mkapa came to power in 1995 with his journalist friends encouraged to call him Mr Clean.

The British journalist David Martin wrote in the Zimbabwean government controlled Herald (December 14, 1995) that the former journalist faced a daunting task of cleaning up the mess left by  President Ali Hassan Mwinyi (a Muslim from Zanzibar).

Mkapa told his friend David Martin: ”There is a widespread feeling among the population, as well as the donor community, that it’s a serious disease in our society, it’s an impediment to justice and fairness, it has reached the point where it’s a serious impediment to development.”

Benjamin William Mkapa was the youngest of four children. He was born on 12 November 1938 at Ndanda, a village in the southern region of Mtwara which borders Mozambique.

After elementary and secondary education in his native Tanganyika, the  personable young man pursued a degree course in English at the University of Makerere in Uganda, graduating in 1962.

In the mid 1960s, he began his career as a journalist editing the Tanganyika African National Union(TANU) owned Nationalist  newspaper in May 1966 and then The Standard in 1972.

In July 1974, he was appointed to serve as press secretary to President Julius Nyerere.

Shortly after setting up the now defunct Tanzania news agency SHIHATA in 1976, Mkapa switched careers and became a diplomat.

His first posting was to Nigeria as Tanzania’s high commissioner.

He then held several ministerial posts, including foreign minister, before succeeding President Mwinyi.

While Mkapa’s detractors dubbed him as Nyerere’s ‘errand boy’, he went on to dismantle what was left of Tanzanian socialism, aggressively pursuing capitalist policies, winning him accolades from  the World Bank and the International Monetary Fund (IMF).

Ben Mkapa will be given a state funeral next Wednesday (July 29).

Many in that ill-fated country will  look back to his time in office with some affection, considering that the new president, John Magufuli, is in the process of dismantling what’s left of the free press in Tanzania and imprisoning anyone who opposes him.