A Service of Thanksgiving and Remembrance for the life of Lawrence Chinyani Vambe (March 5, 1917 – September 14, 2019) was held at 2.30 pm at St Joseph’s Roman Catholic Church in Highgate, London, on Thursday October 9th , 2019. (Picture  of Lawrence Vambe soon after his 100th birthday at his care home in North London by Trevor Grundy)

It was attended by close friend and family members of the late author, historian and journalist who had such high hopes for his beloved Zimbabwe when Robert Mugabe was appointed Prime Minister in April 1980 but who became so quickly disillusioned because of the wave of violence the late dictator launched: first, between 1983 – 1987 against civilian men, women and children in Matabeleland and the Midlands and then soon after 2000 when President Robert Mugabe launched a violent campaign against white farmers and their families that led to the collapse of the commercial farming sector of the economy.

The following obituary was published in The Times on October 4, 2019

Obituary  and picture by: Trevor Grundy

SOON after Independence in April 1980, Lawrence Vambe was asked by a reporter what he most hoped for now that his long suffering country had moved from all white-rule in Rhodesia to a black-led government in Zimbabwe.

He said his greatest wish was that in years to come people would not enter the political arena to gain fame and fortune for themselves but, rather, to serve the people and meet their needs after a long and costly ethnic war that started in 1966 and ended in 1979.

He said – “Everywhere you look in Africa, you see a tiny minority living on islands of plenty in seas of poverty.  We must never let that happen in Zimbabwe.”

“When I suggested to Lawrence that since he was now in his twilight, he should come home and be buried there, he wistfully looked at me and said, ‘I would rather die here than go home and see the mess that Mugabe has brought our country into.’ “

Lawrence Vambe was born on March 5, 1917 the year of the Russian Revolution at Mashonganyika Village in the Roman Catholic Chishawasha Mission about 20 kms to the north-east of Salisbury (Harare).

His mother died shortly after his birth during the worldwide influenza epidemic leaving baby Lawrence in the care of Dominican nuns from Germany. Every morning one of them milked a cow and fed him with fresh milk.

He started his pre-primary education at Chishawasha Mission, moving on to Kutama Mission run by Jesuit priests and Marist Brothers. It was the place where so many formidable Africans put their toes onto the first rung of the education ladder. One of them was Robert Mugabe.

At Kutama, Lawrence became absorbed in Christianity but was aware that while the European missionaries preached love, forgiveness and brotherhood,  nearly all white Rhodesians embraced racial discrimination.

In his late teens, he considered the priesthood and in 1936 entered the Seminary of Saints John Fisher and Thomas Moore. But after three years he changed his mind and following a teaching spell at various Catholic mission schools, he had saved enough money to enroll as a student at Saint Francis College, a Catholic institution,  at Mariannhill in Natal, South Africa.

And it was there that for first time he met young men and women who wanted independence for Africa not just reforms approved by white politicians.

Many of the young Africans he rubbed shoulders with were card-carrying members of the South African Communist Party (SACP).

For the young Vambe the appeal of Marxism was strong.

But the appeal of the Catholic Church’s more enlightened social teachings was stronger.

He embraced not Das Kapital by Karl Marx but the encyclical issued by Pope Leo X111 in May 1891, Rerum Novarum that addressed the condition of the working classes in an age of social and economic revolution.

At Marianhill, Lawrence specialized in English, History and Art and earned his Matriculation Certificate from the University of South Africa in February 1943.

It seemed certain his vacation was teaching but in 1946 his life changed when he was offered the job as journalist with African Newspapers which owned a string of publications catering for the tastes of young blacks and people of mixed race in a post war world.

For several years Lawrence Vambe, whose grand-father was a Shona chief, lived in Old Bricks, the poorest part of Mbare Township that surrounded Salisbury.

He shared a single room with another aspiring reporter.

He said his life at that time was, “a regimented  existence, in which each person’s movements, income, opinions and even visitors, and of course drink, interested the Big White Brother.”

Lawrence Vambe entered and wrote about this world with understanding and concern and in 1953 he was appointed editor-in-chief of the African Newspapers Group.

Like Lord Byron, he woke one morning to find himself famous.

And what a moment to be an African reporter. It was the year that the liberal missionary Garfield Todd became Prime Minister of Rhodesia with the formation of the Central African Federation (CAF) that linked Northern Rhodesia (Zambia) with Southern Rhodesia (Zimbabwe) and Nyasaland (Malawi).

Despite the opposition of up-and-coming nationalists such as Joshua Nkomo, James Chikerema and George Nyandoro,  Lawrence Vambe saw CAF as something positive because it might block the advance of Marxists coming down from the North and West of Africa and halt the spread of apartheid rising up from the South.

Todd was overthrown by his own Cabinet in 1958 and the liberal dream in Southern Rhodesia ended.

Even so, Vambe continued to believe that CAF was a force for possible good.

In 1959, he was offered the job as information officer for CAF at Rhodesia House in London.

To the surprise of many, he accepted. But the timing of the offer and his acceptance could not have been worse. In March, a State of Emergency had been declared throughout the Federation. Several hundreds nationalist were arrested. Fifty protesters were shot dead by the police and          soldiers.

He flew to London in June that year, after accepting the MBE awarded to him by Queen Elizabeth 11 for his services to Commonwealth journalism, at the start of a three year contract.

He returned to Salisbury in June 1962 where he was immediately offered a job with the PR department of Anglo American Corporation which he worked for from 1962-1979, first in Salisbury, then in Lusaka and finally in London. He returned to Rhodesia in 1979, shortly before the Lancaster House Conference that led the way to elections in Rhodesia and the appointment of Robert Mugabe as Zimbabwe’s Prime Minister in April 1980.

Mugabe wanted Lawrence Vambe to have a high public profile in his government of reconciliation. 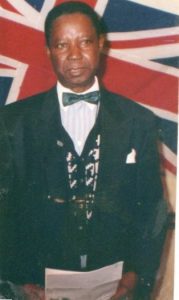 He asked him to devote himself to spreading African culture as a minister and member of the ruling party.

He never joined the ruling party Zanu (PF) and distanced himself from Mugabe at the time of Gukuruhundi (1983-1987) when Mugabe unleashed his Fifth Brigade on men, women and children in Matabeleland.

Lawrence and his third wife Mary left Zimbabwe and lived first at Telford in Shropshire and then after Mary’s death in 2013 with his daughter Elizabeth and her husband Stephen Pollock in North London until he was moved to a care home where he died on September 14.

His lasting literary legacy is his first book An ill-fated people –Zimbabwe Before and After Rhodes.

In the Foreword, the Nobel Prize winner Doris Lessing, a life-long friend of Lawrence Vambe, wrote:

“It was painful reading this book. I hope it will be painful for other white people to read. I hope particularly that it will be read by the white-skinned British, who are responsible for the double-dealing, the negligence, the cruelty, the atrocities described here.”