January 25th , 2021 and the legend of the great Robert Burns lives on. Tonigh, millions of Scots will raise their glasses and remember their greatest poet, a true son of the Scottish soil.

Dissatisfaction in Scotland with the way Boris Johnson is running Britain is so deep that it threatens the future of the United Kingdom, says the former Labour Prime Minister Gordon Brown. “I believe the choice is now between a reformed state and a failed state,” he told the BBC’s flagship Radio Four ‘Today’ programme this morning. “It is indeed Scotland where dissatisfaction is so deep that it threatens the end of the United Kingdom.”

Mr Brown was Chancellor of the Exchequer for 10 years from 1997 when Tony Blair became prime minister. Blair and his lawyer wife Cherie, walked around parts of London talking about a “new dawn” breaking over an united prosperous, class prejudice  and race- hate free globalised but pro- Europe Great  Britain.

The Scotland-born (son of the manse) Brown accused Boris Johnson and his Conservative government of being out of touch with ordinary people. 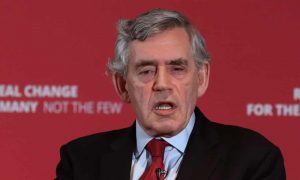 Gordon Brown. He wants to know what’s holding Britain together and what’s dividing the nation

“I do think Boris Johnson has not quite understood how deep the resentment is, how the lack of trust is causing him a problem, a problem about his acceptability in different parts of the country.”

He said that central to the dissatisfaction, is the way that Britain is governed by a London-centric elite.

On Sunday, polls carried out in the four nations of the UK showed that a majority of voters thought Scotland was likely to be independent within the next 10 years.

In Scotland, the poll showed that 49 percent of people backed independence compared with 44 percent opposed – a margin of 52 percent to 48 percent if undecideds are excluded.

Scotland’s first minister Nicola Sturgeon has promised a new referendum on independence if the Scottish National Party (SNP) wins the majority of seats in elections  in May elections this year.

But Boris Johnson keeps saying “no” to a new referendum, prompting Scotland’s first minister Nicola Sturegon to accuse him of being “ frightened  of democracy.” 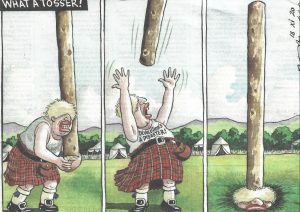 The majority of Scots want close links with Europe and opposed the Brexit which they say will first isolate Britain and then destroy it.

In Wales, where support for independence is weakest, 23 percent backed leaving the UK, and 31 percent holding a referendum.

Over the last year there has been mounting concern that Boris Johnson is surrounded by a collection of former public school boys and girls, many of them millionaires, with  most of them drawn from the same social background.

Said Brown: “You can’t have the elites talking to the elites, you have got to involve the people in what you are talking about . . . “

Over last weekend, the SNP agreed on an 11 -point plan to try and force a second referendum on breaking up the UK. The party is polling at levels that would be likely to see them return a majority in elections in May. But Mr Johnson has said that Scots must wait another 40 years before the Scottish constitutional question is re-visited after it voted against being an independent country in 2014. 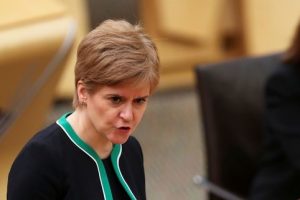 A report in The Times by Kieran Andrews, the paper’s Scottish Political Editor said (January 25, 2021) that the new SNP strategy would involve the next Scottish government requesting a Section 30 order, which is part of the Scotland Act that allows Holyrood (the Scottish parliament) to pass laws normally reserved to Westminster. A bill to allow a referendum would then be put to Holyrood which the SNP claims would leave the UK ministers to choose between agreeing that the Scottish Parliament has the powers to hold a vote, agreeing to a Section 30 order or mounting a legal challenge.

The UK Government says that the issue of independence was settled for a generation in 2014. That prompted Nicola Sturgeon to, once again, openly mock the British prime minister. She called him a “cowran, tim’rous beastie” and Scots around the world would knew what she was talking about – the frightened little mouse, upturned by a plough in a field.

O, what a panic’s in thy breastie!

Tonight, millions of Scots around the world will raise their glasses and remember the life and work of Robbie Burns on his 262nd birthday (January 27, 1759).

Nicola Sturgeon’s flick-knife remark about Johnson being like a frightened mouse up-ended by a Scottish plough, could not have come at a better time.

For her, that is and certainly not for the increasingly mocked by the media Boris Johnson.