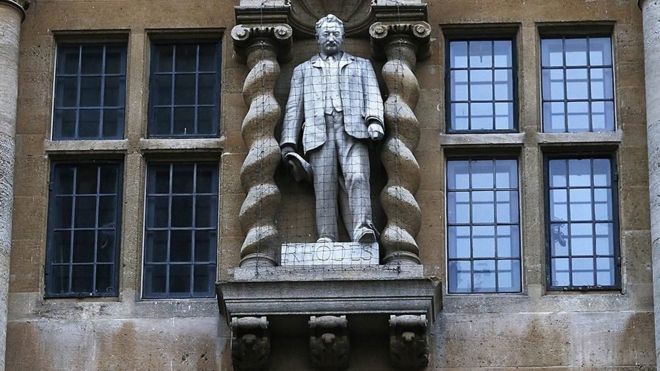 Canterbury, June 8, 2020 — At 1700 (GMT) tomorrow, hundreds of students will meet the police outside Oriel College ,Oxford University,  to renew their call for the removal of a statue of Britain’s best-known imperialist adventurer, Cecil John Rhodes.

The Rhodes Must Fall campaign has been fired-up by events in Bristol when a metal statue  of a 19th century businessman and slave dealer was  yesterday thrown into  the waters of the Bristol Docks.

A student at Oxford University told the BBC: ”Everyone was watching Edward Colston being torn down and thrown in to the deep on Sunday. That re-ignited the feeling that this might be our time.”

At Sunday’s Black Lives Matter (BML) protest, demonstrators attached a rope to the Grade 11 – listed statue that overlooked Colston Avenue not far from the Colston  Hotel on Colston Street.

Four white men rolled the statue to the harbour.

Four black women pushed it into the sea.

“What happened in Bristol is the catalyst for our protest,“ Femi Nylander, an organisers for Rhodes Must Fall, said in an interview.

“We are seeing a global surge against anti-blackness which has allowed us to rejuvenate that debate. It’s what we saw with Colston – it was Black Lives Matter who took down the statue of a slave owner. We’re re-affirming our demands to Oxford that they should themselves take this down as a matter of principle and matter of urgency.”

Tonight (Monday)  in Parliament, Home Affairs Minister, Priti Patel, said that it is not right for “mobs” to pull down statues.

She said their activities were “shameful and you will face justice.”

In London, a statue of Winston Churchill in Parliament Square was sprayed with paint.

The word “racist” was printed on the statue of Britain’s most revered statesman and war leader.

Calls on the students to stop demonstrating because of the Covid-19 pandemic have fallen on blocked ears.

The murder of George Floyd in America has sparked an anger rarely seen in the UK.

It is one that is greatly alarming property owners, especially  thode in Bristol near a street with  the name of a slave dealer’s on it.

How the police handle tomorrow night’s demonstration against Cecil Rhodes will be monitored by millions of people, people who are terrified of a black-white race confrontation that gets out of hand.