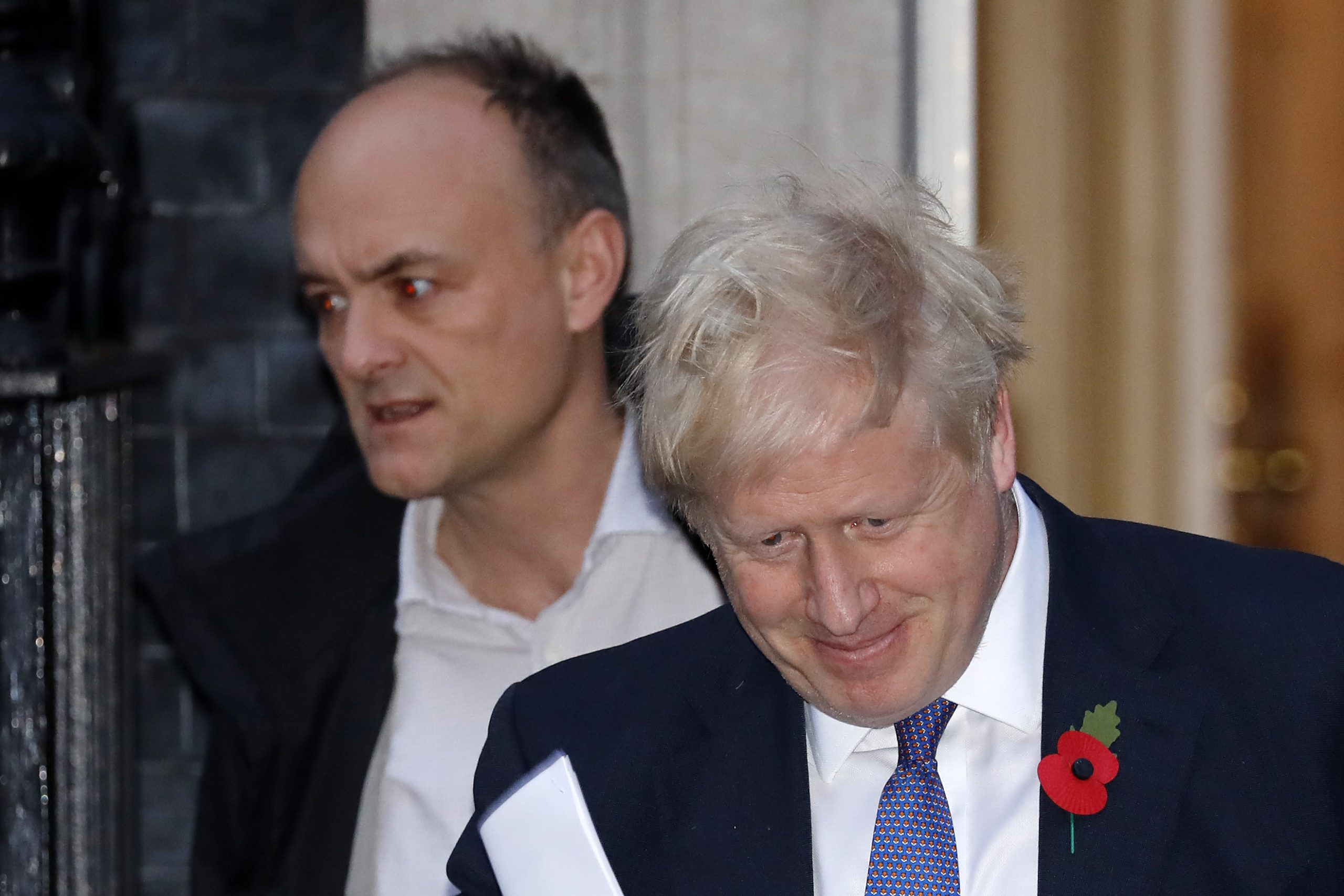 Britain's Prime Minister Boris Johnson (R) and Number 10 special advisor Dominic Cummings leave from 10 Downing Street in central London on October 28, 2019. - British Prime Minister Boris Johnson will make a fresh push on Monday for an early election as EU leaders prepare to back yet another Brexit delay, just days before the departure deadline. Johnson was forced to abandon his promise to leave the European Union on October 31, after MPs demanded he ask for more time while they debate the divorce terms he struck with Brussels. (Photo by Tolga AKMEN / AFP) (Photo by TOLGA AKMEN/AFP via Getty Images)

London, May 25 (2020)  – – – One of Britain’s top behavioral scientists, Stephen Reicher who is the professor of Social Psychology at St Andrews University, Scotland, says that Boris John son’s decision to back his special adviser, Dominic Cummings, will cost lives.

“It’s a catastrophic under-mining of all the efforts people are taking to deal with is pandemic,” he told The Times newspaper.

He says that within a few short minutes Boris Johnson has trashed all the advice scientists had given to the British prime minister on how to build trust and secure adherence to the measures necessary to control Covid-19.

The number of dead from the Coronavirus tonight fell just short of 37,000.

Professor Reicher is a member of the SP1-B sub-committee which provides behavioral science advice to the government’s Scientific Advisory Group for Emergencies (SAGE).

Last night, Johnson went on TV and said he had full trust in Cummings, his special adviser, who drove with his journalist wife and their four year old child to Durham 250 miles from his home in London while suffering from the coronavirus.

A nationwide lockdown was in force at the time.

This afternoon, Cummings held a press conference in the Rose Garden at number 10 Downing Street and attacked the British media for sensationalising the story.

He refuses to resign because he said by driving to Durham during the lockdown he was protecting the lives of his wife and four year old son.

“Be open and honest, we said. Trashed.

“Respect the public, we said. Trashed.

“Ensure equity, so everyone is treated the same, we said. Trashed.

“Be consistent, we said. Trashed.

“Make sure we are all in this together. Trashed.”

He said it was very hard to provide scientific advice to a government which doesn’t want to listen to science.

Afterwards, in an interview with Ben Ellery of The Times, Reicher said:”It’s not about Dominic Cummings. It’s much more to do with what the impact will be on public adherence. The best way to break trust in any leadership is to have a sense of – there’s one rule for us and there’s one rule for them. If, as a consequence, the measures will become less effective, the infection will spread and people will die. It’s a catastrophic undermining of all the efforts people are taking to deal with the pandemic.”

Backbencher Conservative MPs, Church of England bishops as well as hundreds of thousands of health workers are demanding that Johnson sacks Cummings but there’s no sign of that happening right now.

The Right Rev Nick Baines, the Anglican Bishop of Leeds, tweeted: “The question not is do we accept being lied to, patronized and treated by a prime minister as mugs?”

The Rt Rev Vivienne Faull, Bishop of Bristol, writes:” The prime minister has no respect for the people. The bonds of peace and our common life (which has been wonderfully strengthened during testing by CV0-19) have been dangerously undermined.”

An editorial in the Daily Mail said (today) that Cummings is taking the British people to be a collection of ‘fools’ and that he must resign.

(The headline on the front-page of today’s in Daily Mirror brands Cummings a cheat and Johnson a coward.’

In an editorial, the Daily Mail said of Cummings:”He has violated the spirit and letter of the lockdown and in doing so, he has given every selfish and reckless person in this country a licence to play fast and loose with public health.”

It added:”The Prime Minister says he ‘totally gets’ how the public feel about this. Clearly, he totally doesn’t. Neither he nor his principal adviser have displayed a scintilla of contrition for this outrageous breach of trust. Do they think we are fools?

“He (Cummings ) and his master will try to brazen this out.

“For the good of the Government and by extension the nation, Dominic Cummings must resign now. Or the Prime Minister must sack him. No ifs, no buts.”