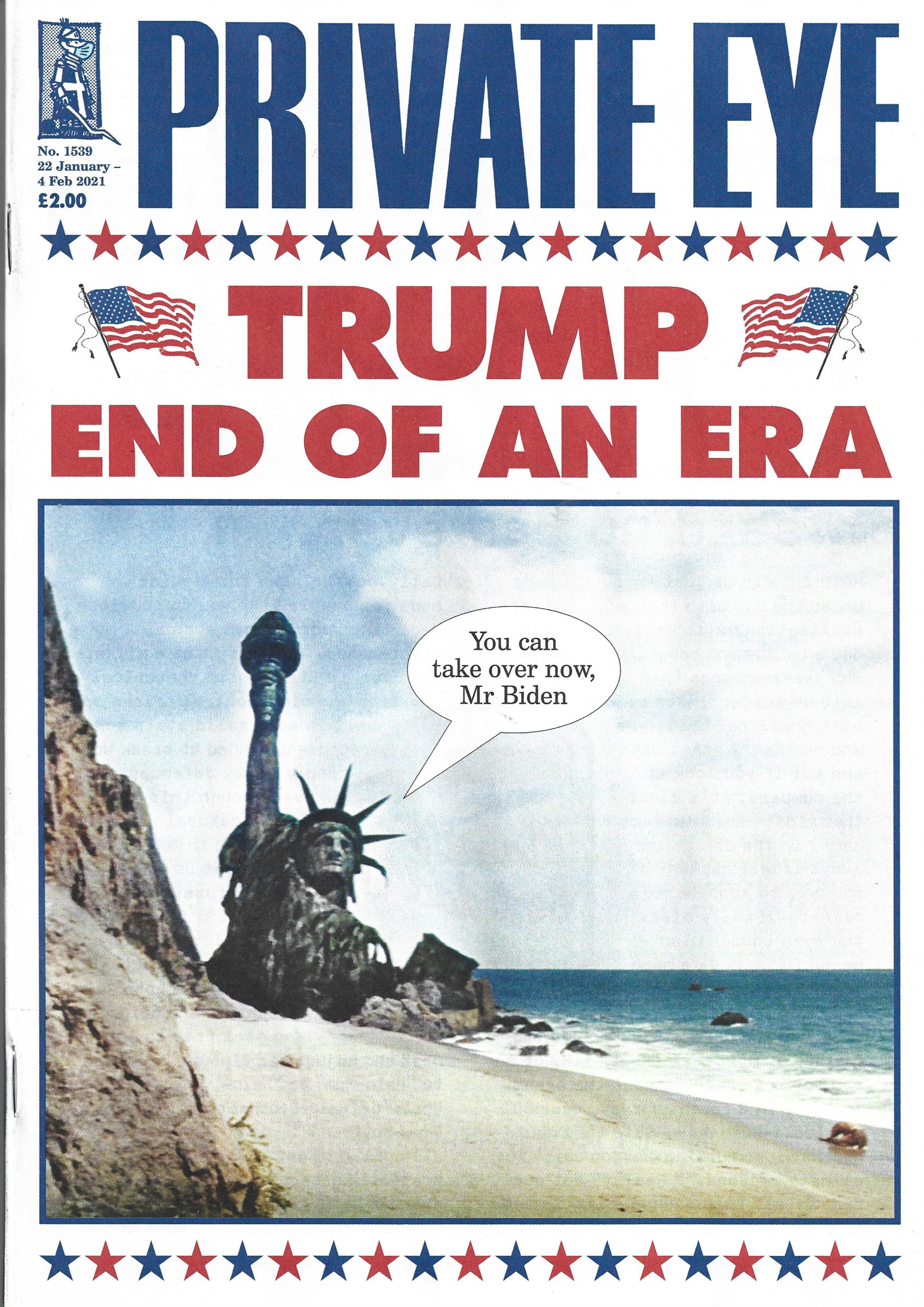 As Joe Biden gets ready to be inaugurated as America’s  46th president, leading political and social commentators in Britain and America say that the economic forces that brought him to power in 2016 are as strong as they were four years ago.

“The actual forces that brought him to power are as strong as ever,” the Anglo-American political commentator Andrew Sullivan told presenter Nick Robinson on the BBC’s flagship radio programme Today (January 19, 2021)

Commenting on the end of Trump’s four years in power and the inauguration of Joe Biden in Washington the Anglo-American political commentator said:  “It may not be the end of something. It may be the beginning of something – maybe worse.”

He said that millions of Americans live on, or below the poverty line, and they are men and women who no longer recognise the country they live in. “We now have  massive immigration which we ‘ve never had before – the highest number of foreign-born immigrants for a century in the United States. There’s going to be a reaction and both sides – centre left and centre right – haver to talk to the 75 million who voted for Donald Trump.”

He said that right now there is “a hole in the waterline of the American democratic ship and unless that  heals this country is a gaping wound.” 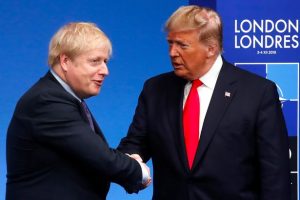 When he was Britain’s Foreign Secretary in 2018,  Boris Johnson suggested Donald Trump could win the Nobel Peace Prize. He said: “If he can fix North Korea and then the Iran nuclear deal, then I don’t see why he’s any less of a candidate for the Novel Peace Prize than Barack Obama who got it before he even did anything.”

Asked about the possibility of an armed insurgency in divided America, he said: ”There’s a level of fury out there and it’s chilling. They (Trump’s supporters) are armed and they have been told that the government is illegitimate, that Biden should not be being elected and that’s a huge problem for a political society to recover from. And until that is resolved, I think it’s going to get worse and worse.”

Sullivan, who was born in Britain but who now lives in Washington, is the editor of the magazine The Weekly Dish.

On the same BBC programme, the editor of New Yorker magazine David Remmick said that “it is not unthinkable ” that had the Covid-19 pandemic not swept America (and the rest of the world)  Donald Trump would have won the 2020 election. “Seventy five million people voted for Donald Trump, knowing that he possessed qualities of such enormous cruelty, ignorance and aggression.  He wiped out the Republican field  four years ago and, quite frankly, if there had not been this pandemic, it is not unthinkable  that Trump would have won the election. It’s not unthinkable at all.” 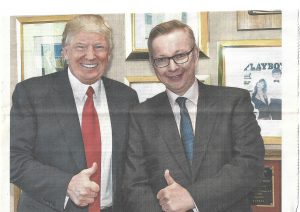 Thumbs up for Donald: Michael Gove after his interview with the American President on January 15, 2017.

”  . .  . in his conversations with us he was at pains to be gracious and generous,” wrote Gove.

As more and more British politicians distance themselves from Donald Trump and show how concerned they were about his excesses, one of Britain’s best known and most widely respected philosophers, John Gray, said that banning Donald Trump from talking to his millions of followers would do little to change the way they see him.

He asked: “If enormously powerful corporations like Twitter, Facebook and Google can proscribe the Far Right without being subject to any kind of democratic accountability who will be next?”

Speaking last Sunday (A Point of View, BBC Radio Four) he  dismissed fear that American might plunge into a civil war.

He said it would be a mistake to suppose that a danger to American society had somehow receded with the arrival of a Democrat president in the White House. If violence continued, America risked becoming a failed state.

“The world’s pre-eminent democracy could become a failing state. It would be an astonishing turn of events but scenes of January 6  are fresh in  our minds. Let’s hope it’s not too late to reverse media bans that could leave millions of Americans convinced their voices are being silenced. For it is not only freedom that is in danger when speech is curbed.” 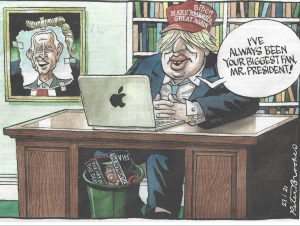 In one of the first articles published in Britain about the ‘new dawn’ in Washington, the former editor- in -chief of the Wall Street Journal, Gerard Baker, wrote in The Times (January 22, 2021) that when Joe Biden was made president it was a bit like the liberation of Paris, the fall of Ceausescu, and the Spice Girls getting together again.

“We’re talking about the response of most of the world’s news media, those professionals whose job it is to chronicle for an information-hungry audience the morally complicated, infinitely diverse warp and weft of the human fabric,” he said in an article under a headline reading “Biden risks squandering the chance to heal.”

He said: “Those solemnly self-important purveyors of facts in a post-truth world were a gaggle of blubbering, gushing, babbling groupies. The BBC’s journalists, whose presence in Washington must have rivalled that of the National Guard, seem to have been given yet another holiday from their supposed obligation to impartiality as they waxed at length about the  ‘historic’ scene and its ‘healing’ power.”

He wrote: ”The American press, whose reporters once revelled in their reputation as cynical, hard-bitten fact gatherers, un-deflected by any emotion from their focus on getting the story, were like cheerleaders at a high school football game. One CNN news chief remarked, during a ceremony the night before the inauguration to mark American lives lost to Covid, that the long, parallel lines of illuminations along the National Mall were like “extensions of Joe Biden’s arms embracing America.” If you wondered what happened to religion in a supposedly secular world, look no further.”

Baker reminded his readers that Joe Biden won the last American election by a margin of 52-48 percent.

Trump’s supporters represent “a swathe of America that can’t be dismissed as treasonous reactionaries. Mr Biden won’t get to heal the nation by telling the 74 million people who voted for Donald Trump that they were ignorant, deluded dupes or white bigots; that some kind of re-education – de-Trumpification – of half the population is what’s needed to restore cohesion and equilibrium as many Democrats believe.”

The writer warned that belief white supremacism is the source of the nation’s problems is flawed and said: ”As vile as racist extremism is, it’s not Trump’s voters’ assertions of their white privilege  that explains the divided nation. It’s the emphasis by the other side of the political divide – dominant in cultural and business life as well as now in government – of the centrality of racial, gender and sexual identity in American life. These voices call for a re-writing of American history, the elimination of the idea of traditional gender.  defunding the police, re-defining racism to require people to surrender their unconscious white privilege in order to avoid being accused of it, and shamed, marginalised and cancelled if they don’t.”

To Baker’s way of thinking,  Biden would squander a great opportunity “if he follows most of the media in insisting that bringing America together will require the former president’s supporters  to acknowledge  their irredeemable sinfulness.”