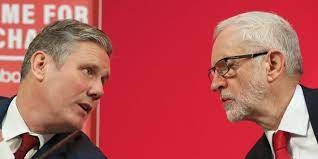 It has been said, and in certain circles held to be true, that Britain acquired its empire in a fit of absent mindfulness.

As Britons prepare for the next general election in 2024,  spin doctors with Oxbridge-gained degrees next to their names, are using their expensive educations to dream-up catchy and sometimes meaningless three-word slogans to win the votes of people they know next to nothing about in run-down parts of the country.

As slogans roll out of their ever-open mouths, most assume (or wishfully hope) that voters have short memories and that they see the years 2015-2200, when millions of people admired and applauded Jeremy Corbyn as leader of the Labour Party, as yet another fit of national forgetfulness.

That not so long ago millions of people supported Jeremy Corbyn and his pre-Tony Blair socialist policies. And whats loosely called The Establishment whoops with delights.

This week, The Spectator magazine named Sir Keir as Politician of the Year. When he went to the rostrum to receive this ‘honour,’ there were roars of approval from Conservative MPs.

Rightists around Starmer remind him that Tony Blair won the 1997 election by abandoning Labour’s commitment to nationalisation and class warfare.

The Scottish columnist Iain Macwhiter said in his latest clumn that left-wingers like The Guardian’s Owen Jones are distraught. ‘They claim, not only that Keir Starmer campaigned in 2019 to get Jeremy Corbyn (Jezza) elected as prime minister minister but that he won the subsequent leadership campaign (after Corbyn was removed following a row about anti-Semitism in sections of the Labour Party) on false pretences, sounding as if he was still speaking from the same hymn sheet as Jezzza. Now he is sounding positively Tory on touchstone issues like immigration.’

Adds David Goodhart on The Spectator – ’The dirty little secret of British politics is that there is now a large amount of consensus on most big policy issues between the two main parties: the differences are largely in the detail.’

Goodhart bangs on: ‘Democracy is having its wicked way and its magical force field is forcing Labour to pretend that it is not, deep in its bones, a party of liberal graduates, as it tries to win back those mall-c conservative voters that Tories nicked from them over Brexit.’

What’s certain in a land full of  charming liars is that however much politicians bang on about taking back control, Britain is now seen as the Sick Man of Europe.

How and why Britain landed in this potentially dangerous situation is the subject of endless debate. 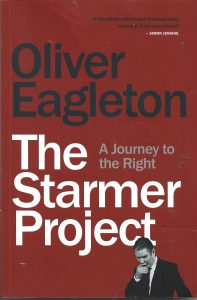 Making sense out of nonsense is no easy thing to do.

So, it’s three cheers for the journalist and socialist campaigner Oliver Eagleton for trying. He opens closed windows and lets in air that helps us breathe more freely and understand a little more about the stormy relationship between old style socialists and those who could be mistaken for Conservatives but for the colour of their ties.

Eagleton tells the story of the rise, the years as leader and then the dramatic and sudden fall of Jeremy Corbyn in 2020.

After years of New Labour rule under Tony Blair and then Gordon Brown (from 1997 to 2009) David Cameron (Conservative) became Prime Minister from 2010 until 2016, resigning after an un-necessary referendum which saw a narrow win for those wanting to leave Europe and those who wanted to remain. His job was taken over by Theresa May and she was followed by Boris Johnson, Liz Truss and now Rishi (Dishy) Sunak, Britain’s s first multi-millionaire prime minister.

Labour’s challenge for power under the leadership of Ed Miliband ended in the party’s humiliating defeat in 2015. Corbyn’s rise thrilled the young  and the country’s swelling numbers of have-nots with his demand that the Labour Party had to  pick-up and run with the socialist baton dropped (or hurled away) by Tony Blair, Peter Mandelson and spin-doctor-in-chief Alastair Campbell.

As most readers know, Jeremy Corbyn was ousted from leadership in 2020 after a disastrous for Labour general election in December the previous year. The details on what went wrong in the Corbyn camp and the way he failed to charter a policy following Brexit is well documented in this book as is Corbyn’s inability to deal effectively with the explosive issue of anti-Semitism in the Labour Party.

Jeremy Corbyn never was and never will be anti-Jewish. But his handling of the situation was inept.

So, what came next?

The book’s sub-headline answers the question.  It was A journey to the Right under the leadership of Keir Starmer, a politician deeply embedded in the English establishment, the man now being promoted inside the party as a ‘grown-up’ not at all like the man he took over from.

Some change. Some journey. Some grown-up

All one needs to know about Sir Keir Starmer is here in Eagleton’s book, unless of course you want to peep through the keyhole and find out about his sex life and what sort of wine he likes best.  Sensibly, Eagleton has left that sort of junk for other hacks hungry for their fifteen minutes of fame  and the splash cash that goes with it.

Eagleton’s book is divided into four sections – The Lawyer, The Politician, The Candidate and The Leader. There’s an Afterward in which the author sets out his own perspective on the future of the Left in Britain.  In my opinion, it is the worst part of an otherwise valuable book.

The back of The Starmer Project tells us that the author paints ‘a damning picture’ of a the Labour Party boss, who as a law student first at Leeds University and then at Oxford University,  mingled with the Trots when he was not much more than a teenager. He went on to become a human rights lawyer and later, head of the Crown Prosecution Services (CPS) as Director of Public Prosecutions (DPP) from 2008-2013.

Keir Starmer refused to bring charges against the killers of Jean Charles de Menezes, shot dead by police at a tube station at Stockwell in July 2005.

And horror of horrors to Labour Party Leftists, he worked closely with Eric Holder, the USA Attorney- General under Obama.

This Englishman with his well-publicised lower-middle-class background got what he wanted all along and was made Knight Commander of the Order of Bath in 2014.

That has infuriated Leftists all the more and they point to the way he played footsie with the American as well as the British establishment during his   time as a top lawyer. Two highly placed CPS sources reported that Starmer struck a deal with the US Department of Justice which guaranteed that the CPS would not contravene American foreign policy interests in its overseas work.

Do his centrist policies and unremitting war on the Left indicate little more than a re-heated Blairism? 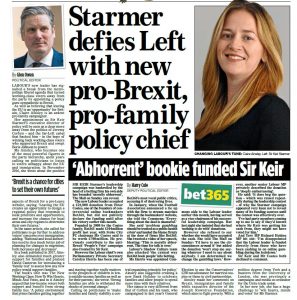 Eagleton indicates that if you really want to know what Sir Keir is up to, then say hello to a woman called Claire Ainsley, author of The New Working Class: How to Win Hearts, Minds and Votes.’

(One wants to turn it into a Reader’s Digest headline and add the words ‘And find God.’)

Keir Starmer plucked her out of the Rowntree Foundation nest and appointed her Director of Policy soon after taking over from Corbyn.

Eagleton writes, ‘Much of Ainsley’s electoral strategy was formulated in her book. In it, she provides an account of the decline of social democratic parties in the Global North following the displacement of the industrial proletariat by a ‘more disparate, more atomized’ working class, and propose a route back to power.’

‘First, writes Ainsley, progressives must accept that ‘class warfare is dead as a narrative, as it doesn’t resonate for people’: nor does ‘an ideological view of the state’, focused on issues like privatisation or democratisation.  Instead of clinging to these passe perspectives, parties should ‘start with what the public think.’

Writes Ainsley, ’These are values that are deeply ingrained in British society and that cut across class that all politicians would do well to understand. Basically, parties should move closer to where the public is, rather than expect the public to come to them.’

In her book, Ainsley cites a survey from early 2015 in which a sample group of 1,771 people were shown a list of twenty-eight different values and asked to pick their favourites. 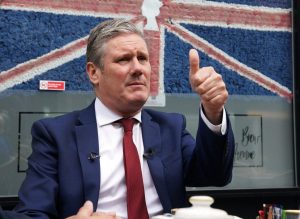 Keir Starmer in the Emperor’s box at a Labour Party circus  . . .

. . . thumbs up for Blue Labour but thumbs down for Corbyn’s brand of socialism

Writes Eagleton, ’The data showed that family hard work, fairness and decency were the most popular. Therefore, she concludes, the way to resuscitate social democracy is simple. Parties must develop harmonies with their ‘core values.’ If the centre left is seen as aloof, this impression can be remedied by activating the ‘moral foundation’ of the electorate. If the working class is atomised, it can be re-united by an organisation that understands these ethical imperatives.’

Hannah Arendt knew a thing or two about what happens when catchy slogans replace meaningful policy. She wrote over seventy years ago in her seminal work ‘The Origins of Totalitarianism’ that people get to breaking point when they see more and more wealth flowing into fewer and fewer utterly useless hands.

She wrote – ‘Persecution of powerless or power-losing groups may not be a very pleasant spectacle, but it does not spring from human meanness alone. What makes men obey or tolerate real power and, on the other hand, hate people who have wealth without power, is the rational instinct that power has a certain function and is of some general use. Only wealth without power or aloofness without a policy are felt to be parasitical, useless, revolting because such conditions cut all the threads which hold men together.’

Aloofness without a policy – four words that sum-up the Conservatives under Boris Johnson, Lis Truss and now Dishy Rishi.

Towards the end of this book, I had to smile and thought – Well, if Claire Ainsley gets the push, she could always get a job as a Conservative Party speech-writer.

Were that to happen, working-class voters should put on blue shirts with red ties and whistle a happy tune as Brian was told to do in the Monty Python film.

The message coming down your way soon will be – Relax, learn your place, stand on the shore and wave goodbye to the good ship New Jerusalem, steered by a sad old man remembered by a few funny old -time socialists who supported the Captain Ahab of British socialism, now on his way to another ocean without a harpoon where on stormy and life-threatening waters even the most dangerous of whales has turned friendly and blue.