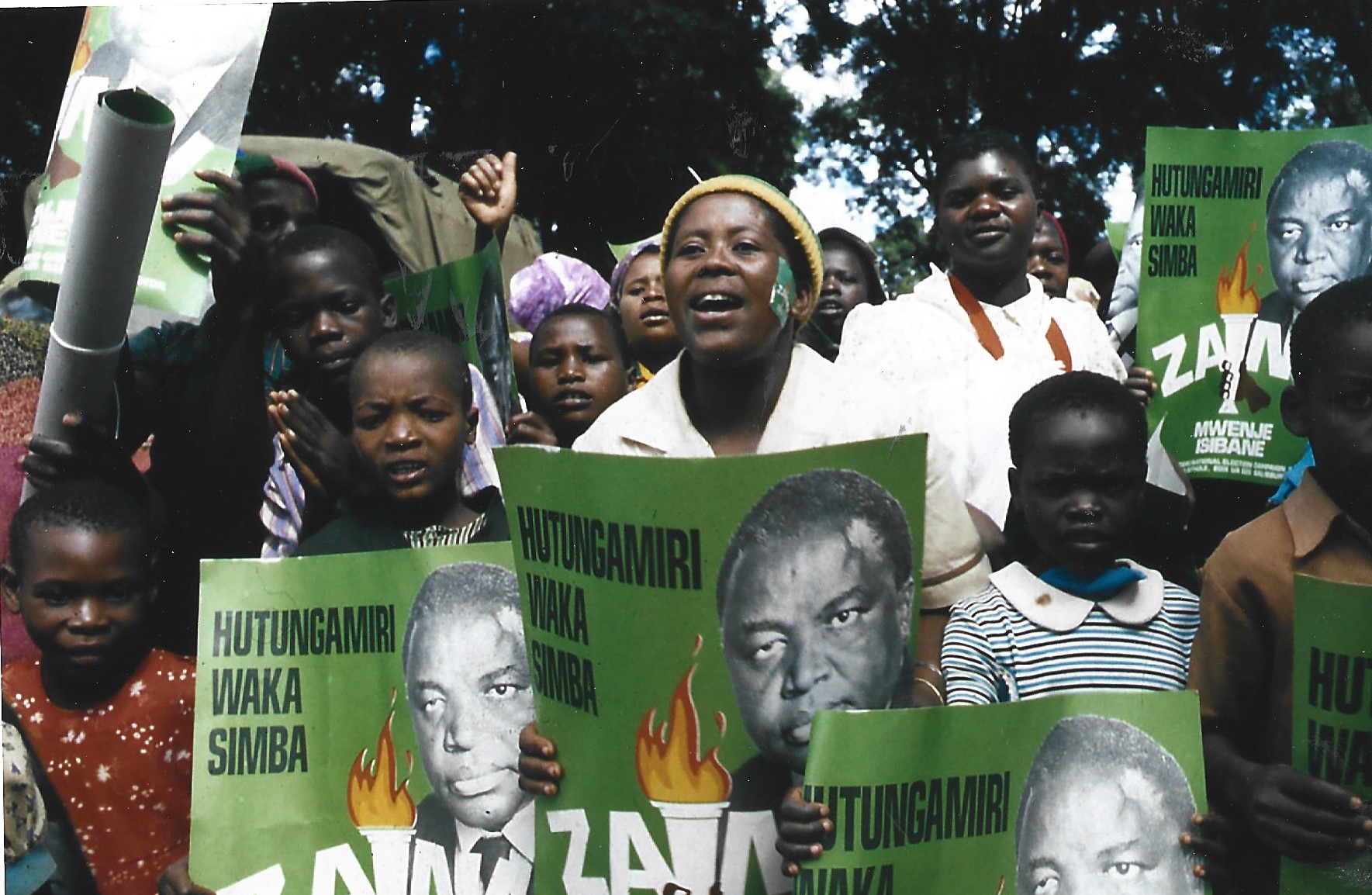 Jubilant supporters welcome Rev.Ndaabaningi Sithole back to the land of his birth in 1992 (Picture: Trevor Grundy)

Guest writer of the month

(Reproduced with the kind permission of the author and  The Conversation)

Ndabaningi Sithole was one of the founding fathers of the modern state of Zimbabwe in southern Africa. In August 1963, he became the first president of the Zimbabwe African National Union (Zanu), the militant liberation organisation that fought against white minority rule that he led for a decade before being deposed in a palace coup engineered by his rival Robert Mugabe. Mugabe went on to become the post-independence leader of Zimbabwe.

Sithole was the most prolific black writer in colonial Rhodesia from the 1950s until the country gained independence as Zimbabwe in 1980. In that period he published nine books (one serialised in African Parade magazine). He also left an incredible archive of the liberation struggle that was generated in real time. Surprisingly, most of Zimbabwe’s liberation figures did not leave behind a lot of their own writings. Sithole is unique in that regard. 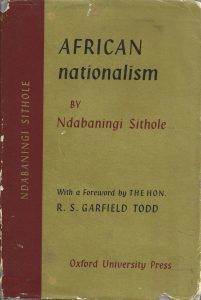 His most important book, African Nationalism, which has recently been republished, is part autobiography and part polemics that provides a history of the liberation movement in Zimbabwe at its nascent stages. It was first published in 1959 and then in 1968.

A third edition of African Nationalism is timely. It was released by his family through the Ndabaningi Sithole Foundation which was launched last year to “honour and perpetuate his legacy as an advocate for civil rights and pan African democracy” through republishing his books and hosting events.

It’s timely because there is a reconfiguration of the politics of Zimbabwe. Mugabe, who was a dominant force for almost four decades, has since died. There is currently a vigorous contestation for power and legitimacy going on in the country. Figures like Sithole who have been sidelined in Zimbabwe’s history offer us an opportunity to reconsider suppressed views and perspectives.

More than six decades after the publication of African Nationalism, it remains a critical text to think about topical subjects such as self determination, political representation and decolonisation. Sithole’s foray into active politics was primarily through his writings and thus his bona fide credentials as a leading intellectual were embraced. His book’s wide critical acclaim and translation into half a dozen European languages earned him respect among his peers.

Sithole composed the book in the US where he was a student of theology. He explained his impetus in his introduction:

I was confronted by what some of my American friends said about African nationalism, which at the time was just beginning to be felt throughout the length and breadth of the continent of Africa, and which was also beginning to make fairly sensational international headlines. The big question which everyone was asking: Is Africa ready for sovereign independence? The majority greatly doubted that Africa was ready. Some regarded the rise of African nationalism as a bad omen for the whitemen in Africa.

As historian David Maxwell writes, nationalism – supporting the interests of the nation-state – has been a powerful force in Zimbabwean history as a mobilising ideology. It continues to play a key part in the arena in which political ideas and participation are imagined.

Zimbabwean nationalism, a version of which historian Terence Ranger called “patriotic history” remains central to debates about who belongs, and who has the right to speak, to vote and to own land.

The barrel of a pen

Sithole’s tenure as leader of Zanu was mostly from prison, between 1964 and 1974. It was a treacherous time. Most of the black political leaders had been rounded up, detained, killed or forced into exile. Besides directing Zanu’s insurgent activities from his prison cell, Sithole also filled up time writing books: novels, poetry, and political tracts. He considered writing as a revolutionary tool. 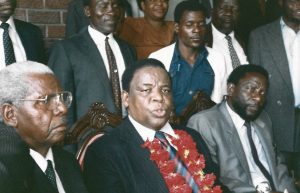 Rev. Ndabaningi Sithole with supporters in 1992 after his return from the USA (Picture: Trevor Grundy)

His manuscripts, smuggled from prison with the help of guards and sympathisers, were mostly published abroad to avoid censorship. Two of these included The Polygamist and Obed Mutezo – the story of an “African Nationalist (Christian) Martyr”. Sithole was also a leading contributor to the Zimbabwe News, a newsletter that was published by Zanu to convey its revolutionary messages.

As if he knew history was not going to be kind to him, Sithole spent considerable time writing his ideas, but also about people he met as a leader. He partly coordinated the liberation struggle through the barrel of the pen. Sithole writes himself into history. He is not just a chronicler of the liberation struggle, as it is happening in real time, but also acts as an archivist for the future.

While in the US, Sithole published AmaNdebele kaMzilikazi in 1956, the first published novel in Ndebele in Zimbabwe. It was released by Longmans, Green & Co. in Cape Town before being republished in 1957 as Umvukela wamaNdebele by the newly established Rhodesia Literature Bureau. The book is inspired by the events of the Ndebele uprisings of 1896.

Sithole was the product of an unusual progeny – a father from the Ndau clan and a mother from the Ndebele clan. As such, he was not easily contained by the Shona-Ndebele binary that has informed much of Zimbabwe’s modern politics. Growing up in rural Matebeleland, he was raised under Ndebele tradition and culture. It is not surprising that his first published book was inspired by Ndebele traditions.

To look at Sithole’s life and career in retrospect is to wade through so much hubris, of his own making and of others. His fall from grace was spectacular. He has been for the modern Zanu-PF a persona non grata. But a figure like Sithole cannot be easily expunged from history, which he actively contributed to as a leading actor and as a writer. 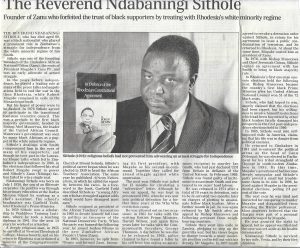 Obituary in The Daily Telegraph of December 14, 2000

At a time when a young generation of Africans are calling for decolonisation, Sithole’s ideas resonate even further. In the preface to the new edition of African Nationalism, former Kenyan prime minister, Raila Odinga posits:

Reading African Nationalism evokes mixed feelings of sadness and joy. It is sad to imagine that a whole book had to be written to try and explain to fellow humans why Africans were agitating for and deserved self rule.

It is always important to look back to the past, in order to navigate the present and the future. His ideas aside, Sithole is also a reminder of the fickleness of politics and history.

Tinashe Mushakavanhu does not work for, consult, own shares in or receive funding from any company or organisation that would benefit from this article, and has disclosed no relevant affiliations beyond their academic appointment.