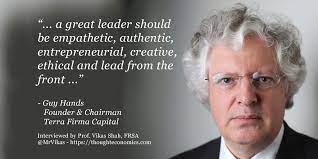 Guy Hands, CEO of Terra Firma.  His opinions are worth ten times more than anything coming out of the ever-open mouths of un-talented Conservative Party MPs

As a slick Conservative Party public relations machine swings into action telling millions of impoverished Britons to rejoice because they have a new non-white, multi-millionaire and devout Hindu prime minister – the fifth PM in six and a half years – one of the world’s best respected investors has warned that unless the new government has the courage to renegotiate Brexit, the country is doomed.

Speaking a few hours before Rishi Sunak was installed as PM on Tuesday October 25, Guy Hands, CEO of Terra Firma, startled most commentators when he said on the BBC’s Today programme – ‘If the Tory party can own up to the mistake they made and how they negotiated Brexit and then have somebody leading who actually has the intellectual capability and the authority to renegotiate Brexit, there is a possibility of turning around the economy. But without that, the economy is frankly doomed.’

Britain left the European Union (EU) after a referendum on whether to leave or stay in 2016.

Rishi Sunak, who is the first investor banker to become prime minister, was a strong supporter of a Leave Europe campaign that saw Boris Johnson lead the Conservative Party into the 2019 general election which resulted in a massive parliamentary majority for the Conservatives.

Mr Hands, a significant donor to the Conservative Party, has been a Brexit critic all along.  Terra Firma is one of the world’s best-respected equity investment firms.

Now, he warns that the UK faces higher taxes, lower benefits and a possible International Monetary Fund (IMF) bail out.

He says Britain’s economic problems started long ago, not just with the now ousted PM or her outrageous min-budget that so infuriated the vast majority of British people by suggesting lower taxes for the super-rich and a huge cut-back in benefits and social services for the poor.

Hands told the Today presenter, ‘The reality is that when they did Brexit they (the Conservatives) had a dream. And the dream was a low-tax, low-benefit economy.’

He said that infuriated most Britons which led to the sacking of the Chancellor who introduced the mini-budget, he unveiled on September 23 and then the dismissal of Truss.

Sterling plunged to a record low against the US dollar and government borrowing costs rose sharply in the aftermath of the mini-budget statement which advocated major tax cuts for the rich without even hinting at how they would be paid for.

The IMF openly criticised the UK Government over its tax -cutting plans, warning they would spark off a cost- of -living crisis.

Truss was forced to make yet another u-turn, so many she must have been dizzy by the time she was told to get out of Number 10 Downing Street.

The rest we all know. 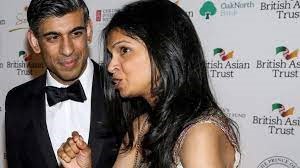 Around that man, the out- of- touch, arrogant and class-soaked Conservative Party MPs and members cling for survival. Jobs, incomes, pensions, perks, expenses, speaking engagements, newspaper articles, TV and radio appearances. The lot.

Key question is – Can Sunak work the miracle?

At 42, he is the youngest British PM since William Pitt the Younger. He is undoubtedly the richest PM in British history with private wealth topping £730 million. He owns four houses and a huge private flat in Kensington, one of London’s most popular playgrounds for the wealthy.  It is empty most of the year, waiting to be occupied by Indian relatives shopping at Harrods which is just around the corner.

His growing number of friends in high places call him Dishy Rishi.

After years at one of Britain’s most expensive private schools, Winchester College, he went to Oxford University and then on to a job at Goldman Sachs.

He is hard-working and charming, so his friends say. A devout Hindu, too. With many, many friends in India.

As Chancellor, he opposed a plan by the Manchester United footballer Marcus Rushford to give free meals to children whose parents were on the breadline.

But Dishy Rishi dug deep when it came to making a donation to his old school which charges £44,000 a year per pupil. He thought nothing about signing a cheque for £100,000.

His best friend is the political editor of ‘Spectator’ magazine. Right wingers in the media love the man.

His rise in politics has been rapid. He has only been an MP since 2015 but in Britain today that’s a helluva long time.

There was trouble at Dishy’s mill that year when it emerged that his multi-millionaire wife had been benefitting from non-domicile tax status paying £30,000 a year to maintain it.

She is not thought to have paid tax on £11.6m in dividends from her family company last year.

At the same time, Dishy admitted held a US green card when he was Chancellor.

“Rishi Sunak’s victory in the Conservative leadership contest is welcome as a symbol of Britain’s diversity and because he was the best of the possible contenders,’ said an editorial in The Times, owned by Rupert Murdoch.

The much more working class ‘Daily Mirror’ took another line and, with less sunshine in its voice, pointed out that yet another un-elected Conservative has been foisted on the British people.

Like all opposition leaders it wants another general election, and now!

Chances of that happening are remote.

Dishy has infuriated many members of his own wonky and wobbling Conservative Party by making Suella Braverman (another Brexit hardliner who wants stronger action sending immigrants to Britain by plane to Rwanda) Home Affairs Secretary only a week after she resigned for breaking a ministerial code and sending official documents deemed ‘sensitive’ on her private email to a Tory backbencher.

Hopefully to no-one else.

The Conservative Party’s latest and richest new poster boy promises to put honesty and integrity into the heart of his new rule.

So, he has already made an interesting start by appointing Ms Braverman to one of the four most important portfolios in government.

Whether there’s a woman, man or child left in Britain who believes a single word rolling non-stop out of the ever-open mouths of Tory politicians remains to be seen.

This article first appeared in the November 2022 issue of the Canadian online magazine, ColdType.