Achilles in Afghanistan: Combat betrayal, liars in public places and the onset of the berserk state in former soldiers 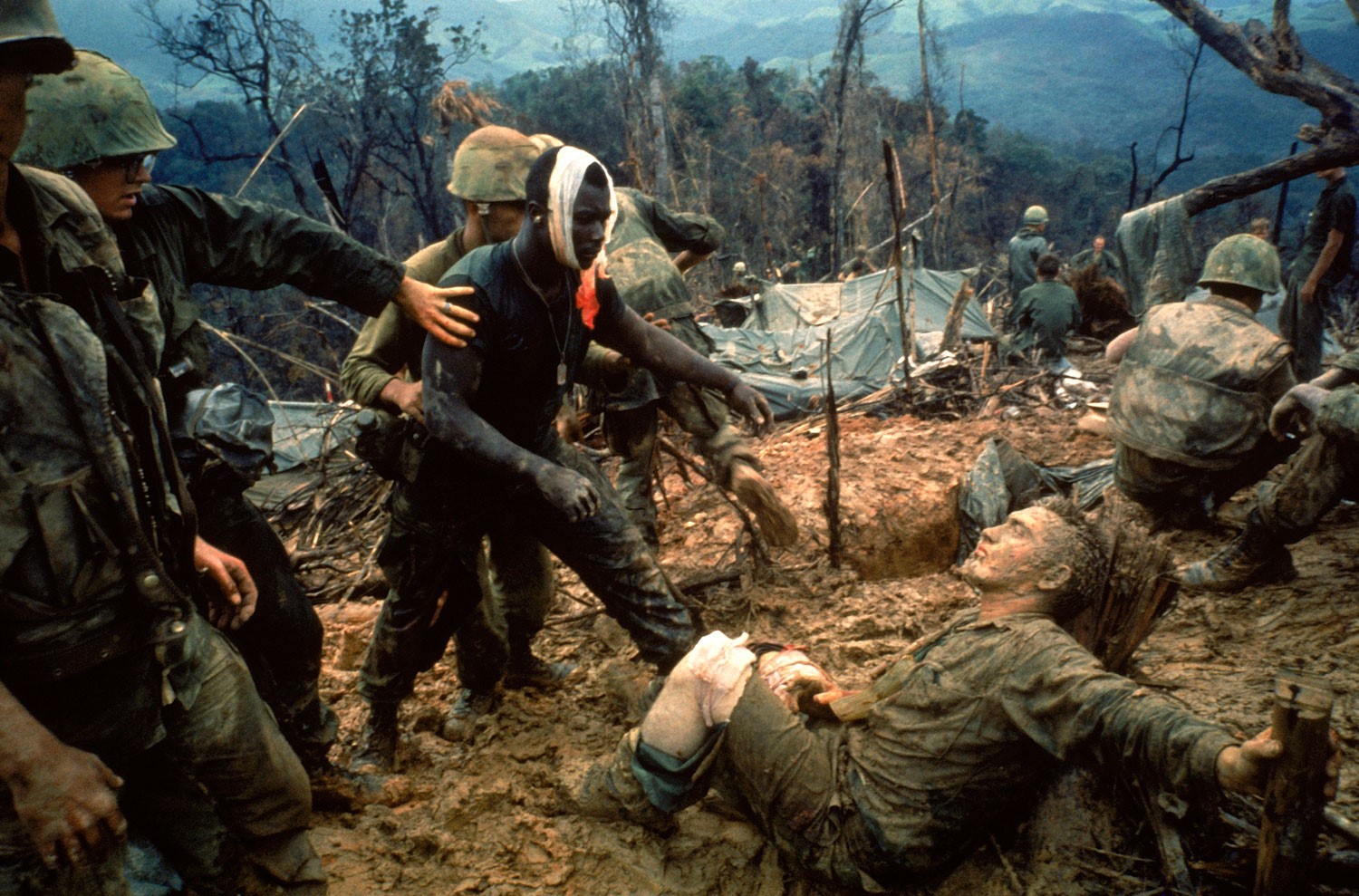 Reaching Out, Battle for Hill 484 by Larry Burrows

The head of Britain’s armed forces, General Sir Nick Carter, has stunned former military commanders and most of the British public by suggesting that Taliban fighters in Afghanistan are men of honour who should not be described as “the enemy.”

On the day that Boris Johnson was mauled in a packed House of Commons for apparent “complacency” and when, on the same day, it was revealed that Foreign Minister Dominic Raab was on holiday at a five-star luxury hotel in Crete and so hadn’t time to find out about the Taliban entering Kabul, Sky News’s Kay Burley was talking to the head of Britain’s armed forces.

She described the Taliban as “the enemy.” 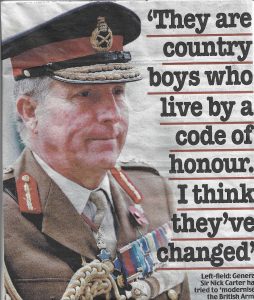 He said – “You need to be careful when talking about the enemy. What the Taliban are is a disparate collection of tribespeople. They are country boys. The fact is that they live by a code of honour and a standard. It’s called Pashtunwall. It has honour at the heart of what they do.”

He added – ”They don’t like corrupt  government or governance that is self- serving and want an Afghanistan that is inclusive for all. I think they (the Taliban) have changed and they recognise Afghanistan has evolved and the fundamental role women have played in that evolution. They say they want to respect women’s rights under Islamic law and that will be Sharia law. But that doesn’t necessarily mean they won’t allow them to be involved in government, education and medicine.”

The well-known broadcaster and former editor of the Sunday Times, Andrew Neill, questioned if the general “had joined the Taliban PR team.” 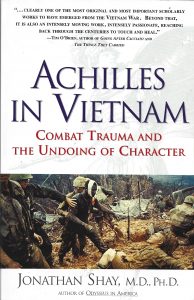 Thousands are physically broken. Many in wheelchairs are asking what they fought for? Thousands need counselling because they are suffering from  Post Traumatic Stress Disorder (PTSD).

Top military people are gob-smacked that the general should make such an appraisal of the Taliban fighters, ignoring their treatment of women, their terrifying campaign against interpreters who worked for the British forces and their record on the battlefield.

Former Royal Navy Commander Rear Admiral Chris Parry said in an interview -”Despite their honeyed words, we all know what the Taliban are. I don’t think anyone, least of all the Chief of the Defence Staff, should be polishing their image given their horrific human rights record and the violence that the servicemen and women have faced. We all understand the tense unstable situation on the ground but the Taliban’s record speaks for itself and I fear his (General Nick Carter) comment will come back to haunt him unless the Taliban leopard changes its spots.”

Speculation mounts that the general is part of a small team pushing the line that over the last two decades the old Taliban has been replaced by the new Taliban of younger, more tolerant, less brutal men. 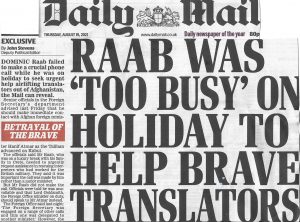 A serving army officer told Mark Nicol, Defence Editor of the Daily Mail –“ It is sickening to hear the Taliban being described like that. But with so much at stake, and with the Taliban calling the shots, General Sir Nick was being careful to keep them onside and accept their narrative at face value. This is such a sensitive situation. His critics should bear that in mind.”

An editorial in that paper said that the general’s statement about the Taliban not being branded as the enemy was sickening. ”These barbarians have murdered and maimed his soldiers for twenty years. What was he thinking?”

Perhaps the general should stop thinking and start listening and reading.

There’s plenty of soldiers out there.

Hopefully, one of the great books about war, combat trauma and the undoing of character is on his bookshelf.

Achilles in Vietnam by Jonathan Shay (Scribner, New York, 1994) tells how soldiers who feel betrayed by their commanders often go berserk if left too long without treatment for PTSD

Dr Shay, a psychiatrist for a group of combat veterans of the Vietnam War who have severe chronic PTSD, wrote it in 1994 almost 20 years after the American defeat in Vietnam.

A quarter million of them were suffering from PTSD.

Now and again there’d be an outbreak of violence that came from nowhere. Then it was made known the man or the men involved served in Nam.

Shay writes:” The sense of being already dead may contribute to the berserker’s complete loss of fear. It may also be the prototype of the loss of all emotion that defines for combat post-traumatic stress disorder the prolonged state of numbness – the inability to feel love or happiness or to believe that anything matters.”

Most non-combatants never wanted to hear the stories of the men and women who suffered so much and were unable to communicate their anguish, their pain, their grief and their anger to an indifferent American public. 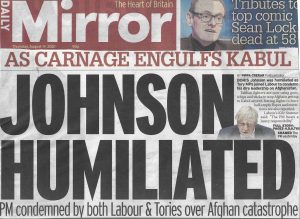 Sometimes, it’s the other way round. The person who suffers after participating in a slaughter doesn’t want to  remember or talk.

“I read about the campaigns in the papers,” Charles said to his brother back on the family  farm in California after taking part in an army campaign, a story told in John Steinbeck’s East of Eden. “Did you go on those?”

“Yes, I didn’t want to think about them. Still don’t,” said Adam.

“Did you kill Injuns?”

“I guess they were real ornery.”

“You don’t have to talk about it if you don’t want to.” 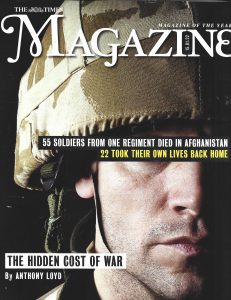 One Vietnam combat veteran described the social process of silencing the survivor.

“I had just come back (from Vietnam), and my first wife’s parents gave a dinner for me and my parents and her brothers and their wives. And after dinner we were all sitting in the living room and her father said, ‘So, tell us what it was like.’ And I started to tell them. And do you know within five minutes the room was empty. They were all gone, except my wife. After that I didn’t tell anyone that  I had been in Vietnam.”

Shay spent weeks getting another very hostile man to talk to him. When he did, he said to Shay – “ The people who read this book ain’t going to believe any of this shit. And you better look out. Nobody’s going to believe you when you tell them and you’ll end up an outcast like us.”

“The painful paradox is that fighting for one’s country can render one unfit to be its citizen,“  says Shay.

The Achilles created by Homer in Iliad is one of the most amazing soldiers in world literature.

His indignant rage after being betrayed and humiliated by King Agamemnon, leads to his withdrawal from the Greek ranks, his care for no-one but those most like him – the Myrmidons -and his brotherly love for Patroklos whose death begins the moral breakdown of a man who once respected the enemy’s dead.

The story is so well known it needs no repeating here.

“Homer’s Iliad was composed about twenty-seven centuries ago; it is about soldiers in war. In particular, Homer emphasises two common events of heavy, continuous combat: betrayal of ‘what’s right’ by a commander, and the onset of the berserk state.”

Shay spent year listening to the stories of those who survived physically but not mentally the war in Vietnam and the consequences of betrayal and lies from the power- brokers in Washington.

While they look after their own – their crazy wealth, their fragile reputations, their expensive security – they let the men and women who’d done the fighting sail away.

They neither know or care.

In this absorbing book, Shay quotes one combat veteran saying – “The US Army (in Vietnam) was like a mother who sold out her kids to be raped by (their) father to protect her own interests.”

For “mother” then read Donald Trump and Joe Biden now.

They’re like Tom and Daisy in Scott Fitzgerald’s The Great Gatsby – “They were careless people – Tom and Daisy – they smashed up things and creatures and then retreated back into their money or their vast carelessness, or whatever it was that kept them together, and let other people clean up the mess they had made.”

Shay writes- ”No single English word takes in the whole sweep of a culture’s definition of right and wrong: we use terms such as moral order, convention, normative expectations, ethics and commonly understood social values. The ancient Greek word that Homer used, themis, encompasses all these meanings. A word of this scope is needed for the betrayals experienced by Vietnam combat veterans. In this book I shall use the phrase ‘what’s right’ as an equivalent of themis. The specific content of the Homeric warriors’ themis, was often quite different from that of Americans in battle.”

Highlights from the book include  these –

Achilles in Vietnam came into being largely because of the encouragement of one of the world’s leading Iliad scholars, Harvard’s professor of classical Greek literature, Gregory Nagy. 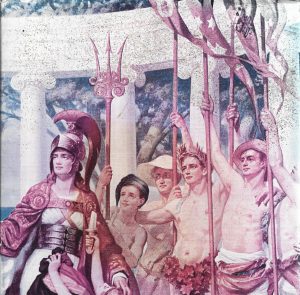 Until Shay and Nagy, the perspective of the combat soldier, his life, his glory, his grief and then his fury has never been applied in any systematic way to understand the Iliad.

For me, Achilles in Vietnam is one of the most important books written.

It begs us to tune in, listen, to care and to help heal. Where we can, if we can.

The Hebrew word sums it up – Timshel (Thou mayest)

Shay’s book should be read by every priest and politician telling us to Lift Up Our Hearts and Always See the Bright Side of Life.

That way we might be ready to face what is going to come soon to a place near where we live  – violence and rage.

Above all, we must listen.

Says Shay – ”We are so trained to deny the soldier’s experience that the normal response to hearing an account of betrayal is to make all the power-holder’s excuses: This is a figment of your fantasy; if you knew all the facts, you’d see it was for the best; you’ve got a hidden agenda for saying this; it never happened; you brought it on yourself; and anyway it’s twenty years ago, so forget it and don’t create more problems now.”

Get used to them. 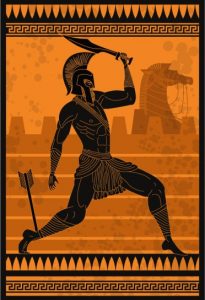 Much of the data below is from Linda Bilmes of Harvard University’s Kennedy School and from the Brown University Costs of War project.

Other allied service members, including from other NATO member states: 1,144.

Taliban and other opposition fighters: 51,191.

This we do not yet know.

Estimates are US$2 trillion (America)

Quote worth remembering from Tory MP Tobias Ellwood, a former soldier and chairman of the Commons defence committee: “We assembled the most incredible technologically advanced alliance the word has ever seen and we are being defeated by an insurgency that’s armed simply with AK47s and RPGs (rocket propelled grenades)

The “new look” Taliban takes over in Afghanistan 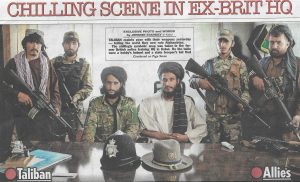