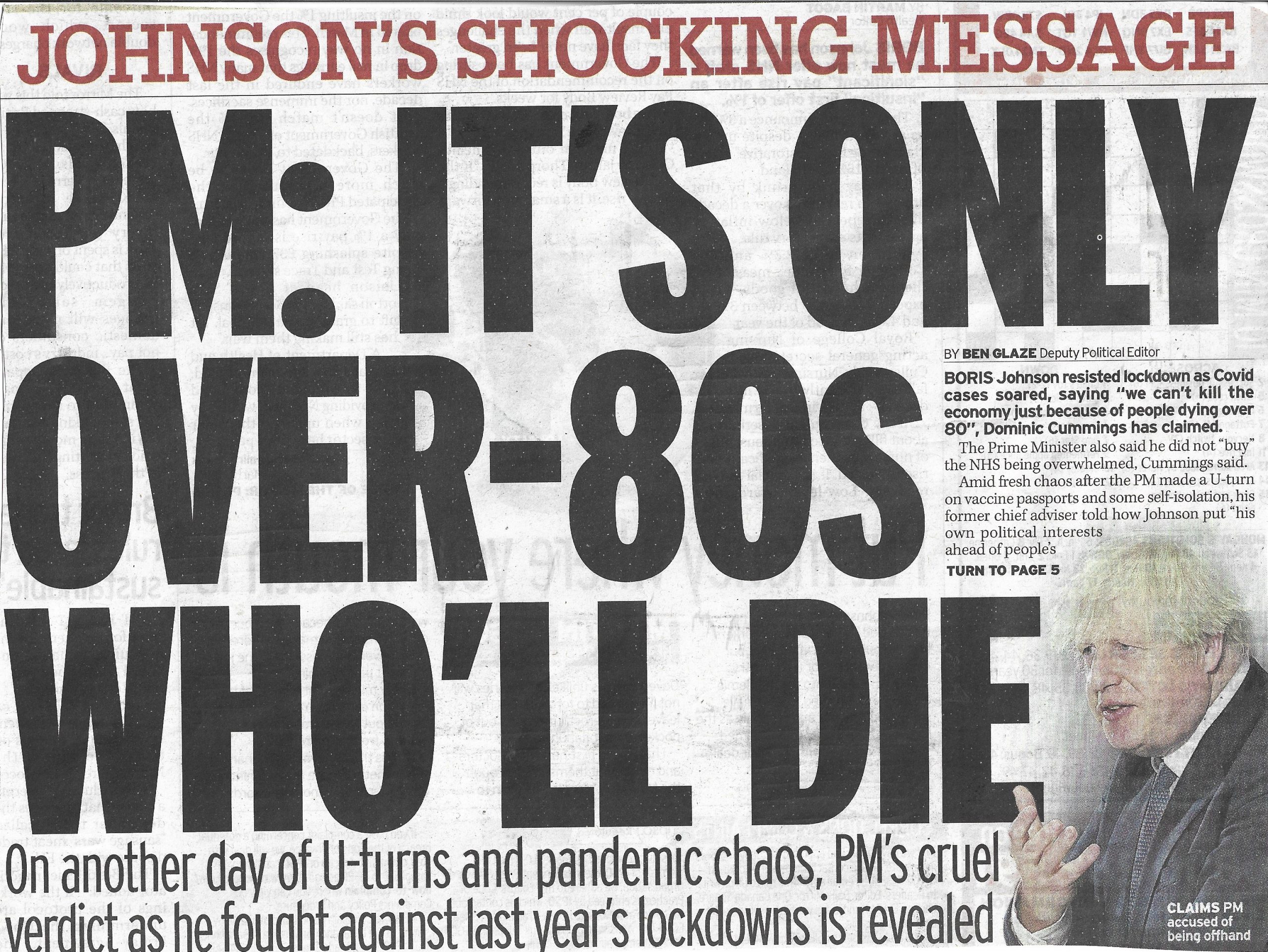 Boris Johnson faces fresh accusations  that he cares very  little about the fate of Britain’s three million over 80s who, he is alleged to have told key advisers and aides ,have all gone way beyond the normal age of life expectancy.

He is also alleged to have told aides in October last year – “I no longer buy all this NHS overwhelmed stuff. Folks, I think we  may need to recalibrate.”

Since leading Downing Street, Cummings has launched a series of attacks on his former boss and questioned his fitness for office.

He’s not the only one.

Boris Johnson’s premiership could be at stake if a “smoking tape” can be produced  that shows he did say he’d sooner see bodies piled high in their thousands than order a third lockdown.

Speaking on the BBC’s Radio Four Broadcasting House programme (May 30, 2021) Hennessy said – “What he (Cummings) has done is fashion an archive he has accumulated into a wrecking ball and he is determined to destroy the Johnson premiership with it.”

Referring to the bombshell remarks Cummings made about the Johnson administration  and the inept way it handled the start of the Covid pandemic in 2019, Hennessy said that there has never been a select committee like the one held in London last week.

He said – “This gaunt figure (Dominic Cummings)  who is devoting his life to bringing down the man whose fortunes he helped such a big part building up  . . . his gaunt face, his white shirt against the green seats in the committee room. There’s a lurking menace about Dominic Cummings. I have a feeling he has more to offer and there’s more he’s keeping back.”

Hennessy said there is no denying Johnson’s ability as a campaigner but the prime minister’s attention span was low and it’s as if he writes his personal biography in his head as he goes along.

“The gifts he had in winning the Conservative Party leadership have no use when it comes to facing a  pandemic.”

He drew attention to the narrowness of the cabinet. 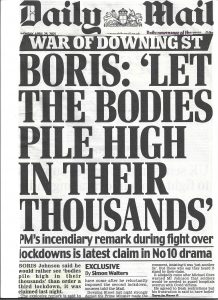 “It was a cabinet originally selected on the basis of a single shared prejudice. They could either approve of a hard Brexit or live with it.  And a cabinet chosen on such narrow basis is quite the reverse of the broad-gauged cabinet that was needed to get us through the pandemic.

Then Hennessy tossed a verbal hand-grenade at the feet of Johnson who increasingly is being labelled by politicians l and commentators as a man not to be trusted.

Said Hennessy – “If I was the Prime Minister, there’d be a piece of paper haunting me this weekend and it is a piece of paper that he himself signed off in August 2019. It’s a Ministerial Code and in it are two very potent sentences.”

The big question now  is this –  Did Boris Johnson mislead Parliament when he denied using those words that captured headlines around  the world about how he’d sooner see the bodies pile high in their thousands  rather than launch another lockdown that would further damage the economy?

Said the well-respected historian and leading authority on the working of the British government  – “If he did use those words – and if someone can provide a smoking tape – he is going to be in severe difficulties in the the House of Commons because, for me, that would be a clear breach of the Ministerial Code.”