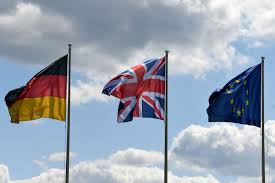 All together – German, British and EU flags flying at the harbour at Thessaloniki in  Greece  (Picture: Trevor Grundy)

London, April 16, 2020 – – – As the British people get ready to nose-dive into the worst economic slump since the 1930s, the MD of the International Monetary Fund (IMF) has suggested that Boris Johnson’s government should think again about leaving the European Union (EU) on December 31.

In an interview (today) with the BBC, Kristalina Georgieva said she hopes that policymakers everywhere start thinking about reducing, and not adding to, uncertainty as the Coronavirus sweeps across the world like some medieval plague.

The UK, she said, would be “wise “not to add to current uncertainty by ruling out an extension to BREXIT trade talks.

Shortly after the IMF boss spoke, the British were told there have been 861 more deaths over the last 24 hours bring the number dead in hospitals to 13,729. Tonight’s toll does not include the numbers who died in communities and care hopes in England and Northern Ireland

A BBC report said that 50percent of all deaths (in hospitals) were people over the age of 80 years. Men are at a greater risk of death than women  and one in three deaths are from black or Asian ethnic groups, the reason being that some of the people in  these groups have high rates of diabetes and heart disease.

The transition period during the UK remains a member of the EU’s customs union and single market is due to end on December31.

But a decision on whether to extend that date is due in June.

So far, the British Government says it plans to stick with the deadline and meet a promise made to the British people at last year’s general election three word slogan – “Get Brexit Done”

But trade talks have been stalled for weeks because of the Coronavirus pandemic.

Georgieva told the BBC in an interview broadcast today that because of unprecedented uncertainty it would be wise not to add more on top of it.

She said:  “I really hope that all policy makers everywhere would be thinking about reducing uncertainty. It is tough as it is, let’s not make it any tougher.”

The British government’s bullish position on EU is now at odds with many in the UK and Europe.

Labour’s new leader Sir Kier Starmer said at the weekend that it was a mistake to put the Brexit deadline into law.

Writing in the Sunday Times, he said it was “illogical” and “incomprehensible” to spend time and money on Brexit negotiations during a pandemic.

As warmer weather comes in, millions of Britons want to see life return to normal as soon as possible.

But there is no chance of that happening in the immediate future.

The nationwide lock-down has been extended for another three weeks.

But anger is growing because the government has failed to test essential health workers, failed to equip NHS doctors, nurses and volunteers with the equipment and clothing they need, and failed to deal with a crisis in care homes where the death of the elderly mounts every day of the week.

There is also mounting fury that while Portugal and New Zealand  shut down the moment the virus struck, Boris Johnson and his key adviser Dominic Cummings went to sleep on the job and only asked for a lockdown 54 days after the first death from Coronavirus in this country.

Official death figures only tell the public how many die every 24 hours in hospitals.

But thousands more are dying in private homes, tiny flats and care homes. Most of the elderly die on their own.

And the British economy is on the point of shutdown.

Headlines scream out daily warnings that a new collapse is just around the corner and could rival the Great Depression in the 1930s.

Meantime, as the government wonders how it will be possible to best mark the 75th anniversary of the ending of World War Two on May 8, reports say that more than six thousand Britons have handed in their passports and taken up German citizenship.

A report by Richard Ford, the home affairs correspondent of The Times said that the trend stepped up immediately after the BREXIT vote in 2016 with Germany, France and Sweden proving popular.

Official figures suggest that the vote promoted Britons living in the EU to secure future residency and freedom of movement t dual nationality.

One reason fot the surge in British applications for German citizenship is that it allows dual nationality to EU member states.

Daniel Tetlow, co-author of a UK Migration Study by the Oxford in Berlin group and the Berlin Social Science Center said he believed that the risk of uncertainty was the main motivation for Britons taking German citizenship – 75 years after the ending of the Second World War.