At a time when Britain is looking to friends outside the European Union, New Zealand has pulled its funding for the Commonwealth Secretariat, the London – based body that guides and monitors the working of the 54 nations “club” which represents 2.4 billion people around the world. TREVOR GRUNDY reports –

London (February 5, 2020)  – – –  The money, which is about £2.5 million (approximately 48m. SA Rand) a year, has been put on hold until the New Zealand government sees the results of an audit report following widespread and damaging accusations that the Dominica-born secretary-general of the Commonwealth, Baroness Patricia Scotland, approved lucrative consultancy contracts to her friends in Europe and a fellow Labour peer in the House of Lords.

The Commonwealth comprises 54 countries, across all continents and its members have a combined population of 2.4 billion, almost one third of the world population, of whom 1,26bn. live in India, 220m. in Pakistan and 94 percent live in Asia and Africa combined.

Baroness Scotland has been strongly criticized by internal auditors for awarding lucrative consultancy contract to a company run by a friend.

The international organisaation’s audit committee has accused her of “circumventing” the usual competitive tendering rules to award a £250,000 commission to a company called KYA Global.

It is owned by a fellow Labour peer and close personal friend, Lord Patel of Bradford, who was contracted to carry out a review of the Commonwealth Secretariat soon after Patricia Scotland took up the job as secretary-general of the Commonwealth in April 2016.

A report in The Times ( February 1, 2020) by the paper’s political editor, Oliver Wright, said that if substantiated, the charges could jeopardize Lady Scotland’s chances of being given a second term of office by the Commonwealth heads of government when         they meet for the 2020 Commonwealth Heads of Government Meeting (CHOGM) at Kigali in Rwanda between June 22-27.

A spokesperson for the British Government said: “The UK will consider all candidates and support the one we believe will lead the Secretariat and represent the Commonwealth most effectively.”

Baroness Scotland would be the first secretary-general to face a challenge to a re-election since the un-successful attempt to oust Don McKinnon over his handling of the Zimbabwean crisis in 2003.

Highly informed Commonwealth sources told me that it is now unlikely that Baroness Scotland will survive endless charges of cronyism unless they are flattened by her and her solicitors.

Speculation mounts that the Commonwealth’s deputy secretary-general, Dr Arjoon Suddhoo, will stand in for her at the next CHOGM.

The audit committee report, leaked to senior journalists, claims that Lord Patel’s firm was “apparently insolvent” at the time it was awarded the contract to examine the way the secretariat was run and come up with fresh ideas about how to make it more efficient.

When the contract was awarded with the personal approval of Baroness Scotland, Patel’s company is reported to have had debts in the region of £40,000.

Alarmingly, the Secretariat was unable to provide auditors with KYA Global’s final report setting out is recommendations.

“The British secretary-general of the Commonwealth, Baroness Scotland of Asthal, could be denied a second term in office after Downing Street declined to support her re-nomination amid allegations of nepotism,” wrote Oliver Wright.

Lady Scotland’s solicitors said that the decision was “wholly justifiable” and complied with all procurement procedures. A spokesperson for Lord Patel said: “The suggestion that Lady Scotland flouted rules to give work to a mate is completely ludicrous.” 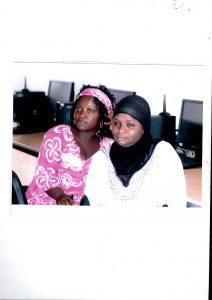 Young girls in The Gambia listening to journalists sent to that tiny West African state by the Secretariat in London. They are told to look to their leaders. When they do, what do they see?

The decision to appoint Patricia Scotland as number two in the Commonwealth hierarchy (number one is Queen Elizabeth) was taken at the Malta CHOGM in 2015.

She took over the following April from the widely un-popular Kamalesh Sharma, a former Indian diplomat.

Born in Dominica in August 1955, she moved to Britain with her family when she was just two years old.

She was the first black woman to take silk in 1991 and became a junior minister in Tony Blair’s government and in 2007 was appointed attorney-general when Gordon Brown took over from Blair.

When she took the job as secretary general she told her staff that it certainly wasn’t for the annual salary of £ 160,000 a year.

She told them she had turned down a much better paid job with a “very, very large bank” and that one of her financier friends asked if it was true she was working for a mere £160,000-

“Patricia is this for a day?” the new secretary general was asked.

Even before charges of cronyism emerged (The Daily Mail and The Mail on Sunday repeatedly refer to her as Baroness Brazen or Baroness Shameless) the bi-weekly magazine Private Eye had its eye on her. 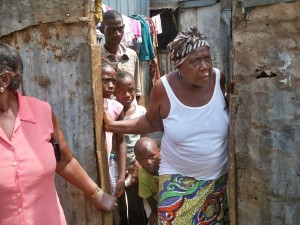 A mother of how many children living behind normally closed iron gate in Freetown, Sierra Leone. What would Baroness Scotland’s £160,000 a year salary mean to a family like this? (Picture : Trevor Grundy)

It revealed in its July24 – August 6, 2015 issue that her campaign to become secretary general was financed by Ron Wahid, a Zurich-based financier who runs RJI Capital and Arcanum Global, a company which offers “a host of bespoke and tailored strategic intelligence products to government entities and private sectors across a range of industries.”

Private Eye said that besides bank-rolling Baroness Scotland’s Commonwealth bid through RJI Capital, Wahid also hired her in March 2015 as a senior adviser (salary undisclosed) to Arcanum Global. She joined a team of little known advisers including a former heads of Mossad, the Israeli secret intelligence agency.

The magazine said that Wahid has business interests in the Ukraine, Russia, France, Belgium Israel and the UAE.

He lives in Zurich.

So why this interest in the Commonwealth, asked Private Eye.

It answered its own question, saying:” But if he (Wahid) ever wants access to a whole new world of potential clients in Africa, India and the Caribbean, having the secretary general (of the Commonwealth) on the payroll probably won’t be a hindrance.”

The Mail on Sunday said four months after she became secretary general, Lord Patel of Bradford had pocketed around £415,000 in consultancy fees

On November 4, 2016 The Times said that Baroness Scotland faced criticism over a reported £250,000 bill for refurbishing her official residence in Mayfair, which is a stomping ground for some of the world’s least known obscene oligarchs.

“But her protests are about details, not the fact, of the spending. She denies that she authorized the installation of a mirror-lined cupboard for £ 4,200 or moving a chandelier for £1,200 – yet acknowledged the bill for renovations will reach £33,000.”

Kamm reminded readers about the origin of the Secretariat in 1965 and its role as defining the Commonwealth’s purpose in a post-colonial world.

He wrote: “Crucial to the Secretariat’s work is its modest ambitions . . . Lady Scotland’s spree bears scant relations to these original ambitions. As Britain has elected to leave the European Union, its relations with the Commonwealth are more important than ever. Any suggestion of profligacy at Commonwealth members’ expense demands a counter- assertion of leadership. Sadly, Lady Scotland gives every indication of treating her role as a sinecure rather than a public service. She needs to get a grip, or go.”