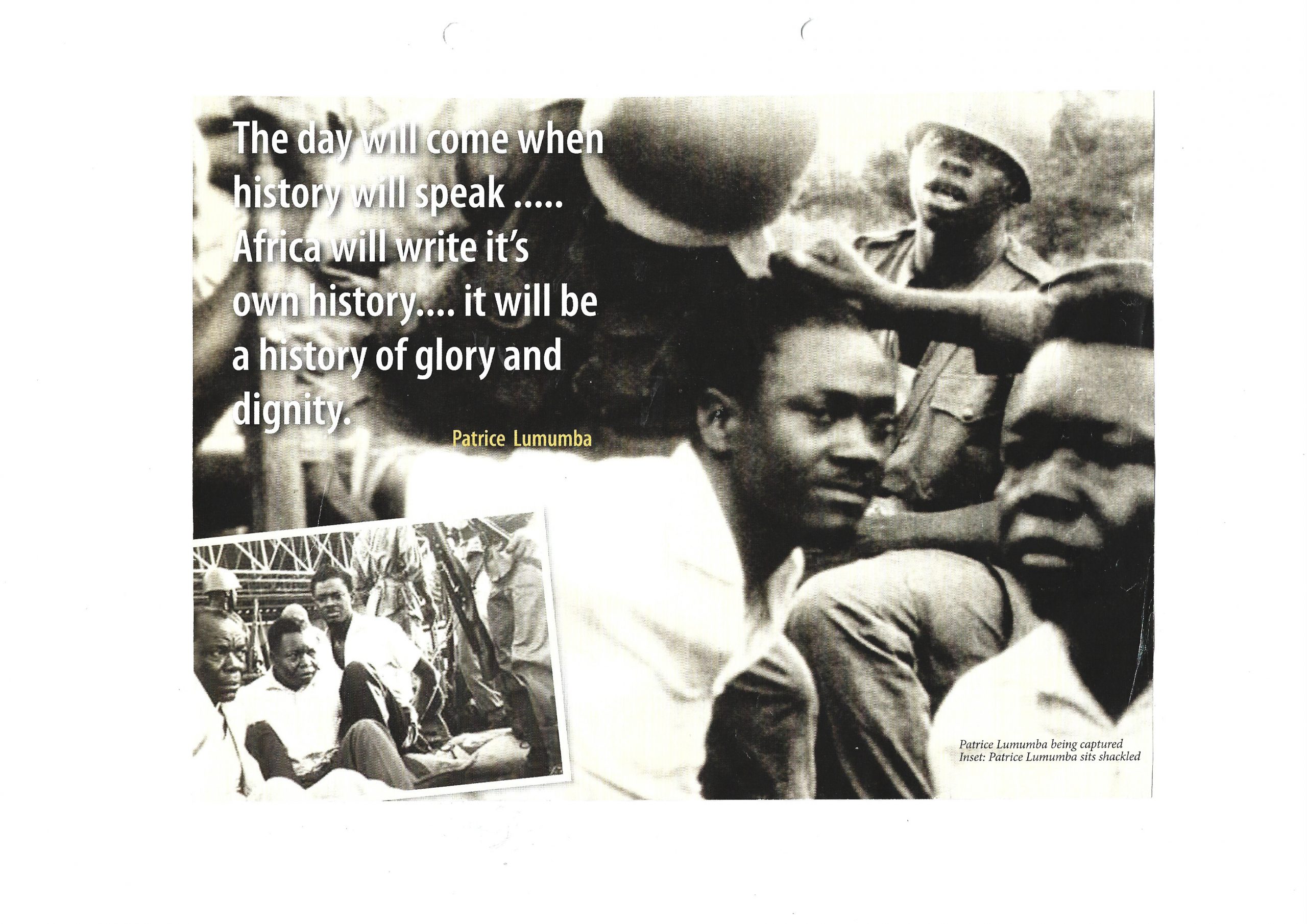 Patrice Lumumba on his way to a horrendous death in the Congo on January 17, 1961

“What do you think spies are: priests, saints and martyrs? They’re a squalid procession of vain fools, traitors, too, yes; pansies, sadists and drunkards, people who play cowboys and Indians to brighten their rotten lives.”  Alex Leamas in The spy who came in from the cold by John le Carre.

Shortly before his murder in January 1961, Patrice Lumumba wrote a letter to a woman called Pauline from his prison cell. He said: ”History will one day have its say; it will not be the history taught in the United Nations, Washington, Paris or Brussels, but history taught in the countries that have rid themselves of colonialism and its puppets. Africa will write its own history and both in north and south of the Sahara it will be a history of glory and dignity.”

Lumumba was a charismatic figure, a man who stood on the public stage during that moment of ferment when colonialism was dying and a new force entered the global scene – African nationalism.

As Richard Bernstein said in his review of a remarkable book The Assassination of Lumumba by Ludo De Witte (Verso, London/New York, 2001) : “In one view, the view that has predominated in the seats of Western power, Lumumba was a dangerous figure who would have taken the newly independent Congo either into social chaos or into the Soviet camp. The director of central intelligence at the time, Allen Dulles, called him an African Castro. By contrast, Ludo De Witte, a Belgian sociologist, takes a very different view.”

The American reviewer (The New York Times, August 3, 2001) wrote: “For Mr Da Witte, Lumumba was a dazzling ray of hope for a post-colonial future in Africa, a man who might have led Congo, reluctantly granted independence by Belgium after a century of rapacious control, into a hopeful future. Mr De Witte’s thesis is that Lumumba was not, as many have previously written, an internal Congolese affair, a kind of panicked over-reaction among African factions fighting it out after the departure of the Belgian government acting through well-paid Congolese stooges and enjoying the connivance of the American Central Intelligence Agency (CIA) and the United Nations.

The story of Patrice Lumumba, his climb to power as the Congo’s first prime minister, his fight against Katanga’s secession , his capture by forces loyal to Mobutu and his brutal murder are well – known to most young Africans.

But, to my mind, what’s extraordinary is the way that a book published by a Belgian sociologist so long after the murder of Lumumba prompted an official inquiry by the former colonial power, Belgium. 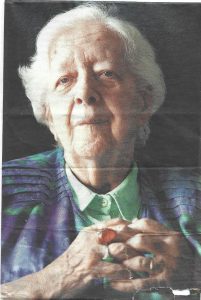 The name Daphne Park (above) does not appear in De Witte’s book. In fact, her name is rarely mentioned in  books written about Africa.

For those who want to know more, The New Yorker carried a long article about her written by Caroline Alexander in 1989 and Paddy Hayes wrote a book about her, Queen of Spies – Britain’s Cold War Spy Master.

Tight-lips went with the job but three years before her death in  March  2010 at the age of 88 she is reported to have told a British politician, Lord Lea of Crondall, that she helped organise the death of Patrice Lumumba.

A report in The Times (April 2, 2013) written by Michael Evans and headlined M16 agent ‘ admitted’ plot to kill Congo’s first democratic leader said that her remark to the former assistant general secretary of the Trades Union Congress (TUC), the Labour Party’s David Edward Lea, was met with astonishment by historians and intelligence officials who rejected the suggestion that M16 had been behind the  assassination.

In a letter to the London Review of Books, Lord Lea wrote: ”It so happens that I was having tea with Daphne Park (later Baroness Park of Monmouth) a few months before she died. I mentioned the uproar surrounding Lumumba’s abduction and murder and recalled the theory that M16 might have had something to do with it.”

The long retired M16 official replied – “We did. I organised it.” 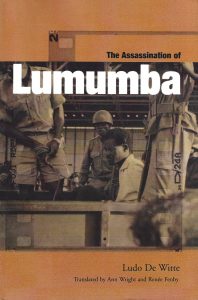 Reaction was fast and expressed amazement such a high -powered former M16 official could have said such a thing.

The Times’ report went on to quote another senior British intelligence official .“It doesn’t sound like the sort of remark Daphne Park would make. She was never indiscreet. Also, M16 never had a licence to kill.”

One commentator drew our attention to James Bond (as if he was a real person) saying that 007 was not an intelligence officer but a professional assassin.

But despite a wave of denials that Daphne Park had unwisely opened a long closed mouth, Lord Lea said he could remember the conversation precisely and that Lady Park was in full command of her faculties when he  spoke to her.

The conversation took place in the Bishop’s Bar tea room in the House of Lords in the Autumn of 2009. He said: “It was a conversation stopper. I don’t know why she blurted it out. We had known each other for some time, she knew I wouldn’t tell anyone the next day.” 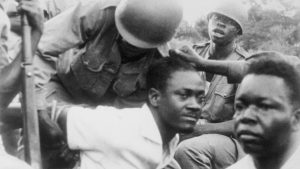 Patrice Lumumba on his way to death in January 1961

Lord Lea said he concluded from their conversation that whoever was directly culpable for Lumumba’s death, “the British Government was  at the centre of the spider’s web.”

Michael Evans wrote: “ A veteran M16 officer, Daphne Park achieved extraordinary influence in the region after she was appointed consul and first secretary in Leopoldville (now Kinshasa) in 1959, one year before Congo won independence after 75 years of Belgian rule.”

Naturally, such a senior M16 official would have sniffed around and got to know Lumumba because he had leadership clout.

She said he was dangerous.

Dangerous to who, is the question?

Most Western historians, commentators, journalists and politicians trot out the mantra that his outreach to the Soviet Union sowed the seeds of his downfall.

But since his death there have been more and more claims by African historians and journalists that interests other than Belgian interests were involved in his removal, his torture, his murder.

De Witte’s achievement is remarkable  because following the publication of his book, the Belgian Government formally accepted responsibility in 2002 for Lumumba’s death. 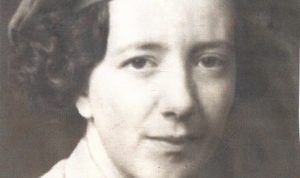 Daphne Park as a new recruit to M16

Almost immediately after the story about Park in The Times, there was a call on M16 to open its files.

Calder Walton, author of the book Empire of Secrets: British Intelligence, the Cold War and the Twilight of Empire said it was time M16 followed the example of its sister service M15 and started to de-classify its records.

He told The Times: ”Park is boasting. She was in safety in the embassy. There was no involvement by the British in the murder of Lumumba.”  He said that Lumumba had always been in the hands of the Belgians and that the Belgian Minister of African Affairs ordered Lumumba’s transfer to Katanga, where he was taken in charge, tortured and executed by four Belgian officers. “The proof against the Belgians is overpowering,” he declared.

Sadly, the remarkable Daphne Park is not around to help shed light not heat.

This was a lady of many talents, keeping her mouth shut but one of them.

She ended her life as principal of Somerville College, Oxford University. Not unexpectedly, she never wrote her memoirs or told us about her days as M16 supremo in Lusaka, Zambia between 1964 and 1967 or about the help she gave President Kenneth Kaunda and others to chose the right kind of Whitehall approved, M16 -ordained economic advisers to help shape Zambia’s post-independence copper-rich economy.

Surely, these are things for the British to boast about – helping young African states find their feet. 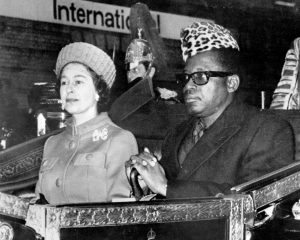 Queen Elizabeth 11 with President Mobutu, the mass -murderer who followed Patrice Lumumba and who went on to rape and ruin his country, becoming one of the world’s richest men in the process.

A leading light in the world of reporting spies – their claims and their lies – is Ben Macintyre of The Times who said (April 5, 2013) that the murder of Patrice Lumumba was too brutal and shambolic to have been organised by Daphne Park and M16.

He wrote: “This is a fine story but it is not quite credible, for several linked reasons. M16 is capable of all sort of skulduggery But it does not do assassinations: the killing of Lumumba was not ‘organised‘ at all, but a brutal shambolic mess. If Daphne Park really had defied M16 policy and overcome her own aversion to violence to arrange the killing it would have been carried out a lot more efficiently. And she would never have told anyone outside M16 about it.”

And finally -“Professional M16 officers such as Daphne Park held their oath of secrecy as a scared, indissoluble bond. She was almost certainly far too clever to have killed Lumumba: but in the exceptionally unlikely event that she did, she was far too discreet to talk about it.”

Is that where the story ends?

Perhaps this clever lady, some called her the queen of spies while others branded her Oxford University’s Miss Marples, was just making a joke while stirring her tea and reaching out for a second slice of fruit cake with a man she liked and trusted, an old chum who would never break  the Mafia-like omerta code and drop her in it.

On the other hand, as the sound of a drawbridge between life and death drew closer,  some deep inner need might have been at work that day in London.