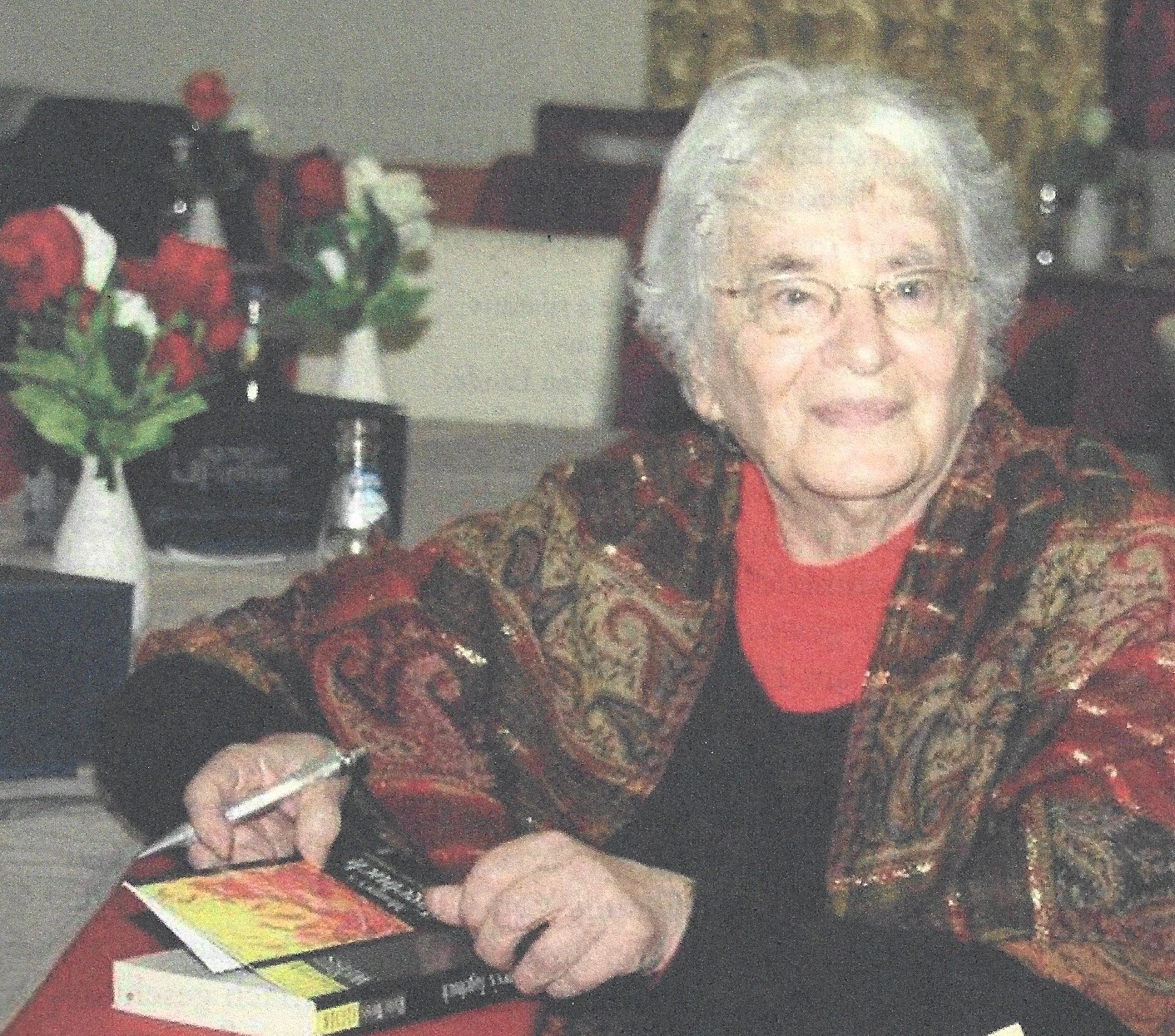 Ruth Weiss: She writes about the greatness and baseness inside us all.

On July 5, 2022, Dr Frederick Lubich of the Old Dominion University in Virginia, USA, launched an 800 pages Festschrift  (German for a liber amicorum or book of friends) honouring the life and work of one of Africa’s best known human rights campaigners, the German-born journalist and novelist, Ruth Weiss.

The venue for the ceremony could not have been more appropriate. Courtroom 600, at the Palace of Justice in Nuremberg (close to where Ruth was born on July 26, 1924) is where the first 24 Nazis were put on trial at the end of the Second World War.

Said Ruth: ‘I came from a little place near Nuremberg which was at the centre of things during the Nazi period. I felt the impact of Hitler at the age of nine. My family left Germany in 1936. We literally grew up overnight.’

And the story of her growing up, first in Germany, then South Africa, Rhodesia (Zimbabwe), Zambia, and so many parts of Europe (and even Germany in the 1950s and 1970s) is incorporated in this vast book (brainchild of Professor Lubich) and told so well by so many who knew, understood, respected and took her as a role model.

Zimbabweans reading this will best remember Ruth Weiss as chief training officer during a government-sponsored programme launched in 1981 to teach young reporters how to understand and  explain to their readers the ins and outs of national and international finance. 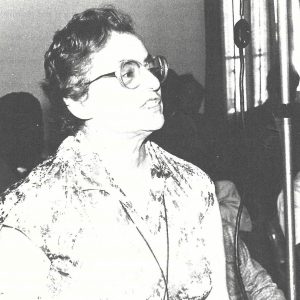 Ruth Weiss at a political conference in Harare, Zimbabwe in the early 1980s (Picture: Trevor Grundy)

With her was the journalist Jan Raath of The Times and Mahmoud Amr, a former London bureau chief of the Middle East News Agency (MENA), who went on to be the official spokesman for the Egyptian Government in Cairo.

In 1980, Ruth was recognised by her journalistic peers as an expert on African micro and macro economics.

Her business/economics writings were succinct, balanced, informative and entertaining. She followed political as well as business trends throughout Central, Eastern and Southern Africa for The Guardian  and Financial Times in London and, as a broadcaster,  for Deutsche Welle in Berlin and the BBC in London.

The front cover of her biography A Path Throught Hard Grass – A Journalist’s Memories of Exile and Apartheid (Foreword by Nadine Gordimer) shows Ruth Weiss with a microphone in her hand interviewing the Reverend Ndabaningi Sithole at the 1976 Geneva Conference.

That picture could have been her with any of the other African leaders she met during her decades working as a reporter in Central, Eastern and Southern Africa –  Nelson Mandela, Robert Mugabe, Joshua Nkomo, Herbert Chitepo, James Chikerema, George Nyandoro, Samora Machel, Sam Nujoma, Jonas Savimbi, Julius Nyerere.

And many, many other less well- known but just as important men and women who shaped post-colonial Africa.

She met so many of them, respected their aims and ambitions and won their respect.

She also had the courage to criticise them once they won.

That was something so few Western journalists had the courage to do, even though the vileness of some of the new leaders matched, or went beyond, those of the continent’s former European masters.

Those wanting to know fully about Ruth Weiss and the Germany she was born into should read not only her biography but also ‘Ruth Weiss in her own words’ written in 1990 and included in The Rift -The Exile Experience of South Africans by Hilda Bernstein (Jonathan Cape, 1994). 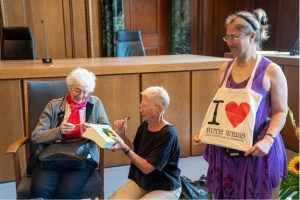 Ruth tells us: ‘I come from a little place near Nuremberg which was the centre of the whole Nazi period. And because of that we felt the impact from the age of nine, which was how old I was in 1933 until we left in 1936 when I was nearly twelve.

‘The Jewish children had to leave their various schools fairly quickly . . . my father was employed by a non-Jewish firm so he  lost his job fairly early in 1933 . . .  my father was given this ticket and he went to South Africa  . . .  as a child I knew what it was to be ostracised and discriminated against on a day-to-day basis.’

After three years, Ruth’s father sent for the family and in 1936 they settled on the wrong side of the tracks in Mayfair, Johannesburg.

’And we were very poor, really poor. We couldn’t speak English; my father came and translated. And there was this peculiar conversation about their (the Afrikaners) customs.’

The similarity between the way Nazis treated Jews and the way some Afrikaners treated blacks and mixed race people was not lost on this shy teenager.

She said to her parents –‘You know, in Fuhrt (her birthplace) they wouldn’t play with me because I’m Jewish. And now here I’m not allowed to play with another child because it’s black.’

Ruth Weiss’ father went bankrupt and her sister left school so Ruth could do her matric.

‘I got a scholarship on the strength of my matric results – I wanted to do BA. LLB., but couldn’t do that because I didn’t have the money. I discovered that although I was German on paper, I was stateless, in fact. And I couldn’t get a loan because I was German.’

But she was lucky in a way and got a job with a local law firm as an articled clerk. But that didn’t last long and she turned instead to writing, influenced by a handful of the Jewish quasi-Marxists and ‘revolutionaries’ who formed small talk clubs in Johannesburg – just the sort of people Doris Lessing mixed with in Southern Rhodesia. 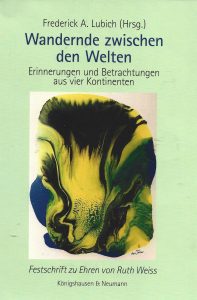 Julia Manstead from London tells part of the Jews in South Africa story:

‘Before the war, anti-Semitism in South Africa had been largely restricted to negative stereotypes. However, there was an upsurge of anti-Semitism in the 1930s, resulting in the ‘Jewish Question’ becoming prominent in public debates. Stimulated by Nazi racial theories, right-wing movements such as the South African Greyshirts adopted Nazi symbols, and developed propaganda arguing against Jewish immigration. The Quota Act of 1930, intended to limit the immigration of Jews from Eastern Europe, did not apply to German refugees. With correct documentation and financial guarantee, Jewish refuges from Germany could enter South Africa. As a result, just over 1,000 Jewish refugees arrived between 1933 and 1935. With rising Jewish immigration from Germany, pressure to limit it increased, and the governing United Party, worried about losing support to the anti-immigration National Party, introduced legislation to restrict immigration in 1937.’

So, Ruth, her mother and siblings got out of Nazi Germany and into South Africa just in time.

Only a few of the highlights of an extraordinary life can be mentioned here.

Ruth Weiss went on to represent the prestigious Financial Mail in Rhodesia but she didn’t stay long in the then Salisbury (Harare). She was PI’d for annoying the authorities with what she wrote about the Rhodesian economy and the effectiveness of sanctions against Ian Smith’s rebel regime.

He was also un-welcome in South Africa because of her loathing of apartheid.

She moved to The Guardian in London but returned to Central Africa where she was business editor of The Time of Zambia and also the Zambian correspondent for the Financial Times and the BBC’s Focus on Africa run by the legendary Ugandan journalist, Israel Wamala.

In 1974, she left The Times of Zambia and went to work in Bonn for Deutsche Welle, surprising many that she was back  and able to  work in a country where horrendous memories were her companions.

In 1978, Ruth turned freelance and after completing the training course for young Zimbabwean  reporters, returned to England and lived on the Isle of Wight where she changed course and became a novelist.

‘My Sister Sara’ is her best-known work. It is about a blonde orphan adopted by an Afrikaner parliamentarian whose sympathies were with Hitler and the Nazis.

. The family falls in love with the child but when papers arrive from Germany, it is discovered that Sara’s roots are ’tinted’ and hatred rips through the family.

The child could take one of two paths – depression or rebellion.

In her life, Ruth knew both. 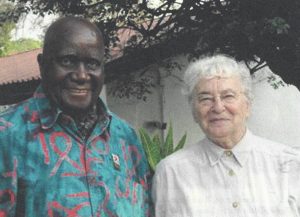 President Kenneth Kaunda with Ruth Weiss in Lusaka in 2009

One of the new author’s best non-fiction works is a biography of the late Sir Garfield Todd, the New Zealand missionary who became Prime Minister of Southern Rhodesia in 1953 but who was removed by his own white cabinet five years later.

Ruth Weiss also wrote about the roles of women in the ‘new’ Africa and one of her most courageous works was ‘Zimbabwe and the New Elite’ which examined the dashed hopes of millions as Robert Mugabe of Zimbabwe turned from liberator to dictator.

Her biography had a foreword by the Nobel Prize Winner Nadine Gordimer who was a lifelong friend.

In 2020 Ruth Weiss was elected as Hon. President of the PEN Centre of German-speaking Writers Abroad.

The PEN website explained that the award was in recognition of her work fighting racism, anti-Semitism and, in particular, her work in German schools.

In a letter, Ruth told me that in September this year, she will be given the PEN Centre’s Ovid Prize for her writing. That will be held at the Frankfurt National Library and the last recipient was Wolf Biermann, the singer and song-writer and former East German ‘dissident.’ 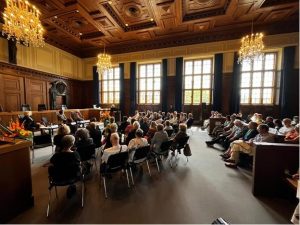 Courtroom 600 in Nuremberg. In October 1945 Nazis were put on trial here. In July 2022 a great German Jewish journalist and novelist was here  honoured.

For many reasons, Ruth Weiss was, is and always will be an exile.

‘She wrote in The Rift: ’I’ve convinced myself over the last ten years, perhaps twenty years, that I would never ever belong to any country any more. And when people have asked me what I feel, I always say I feel a Southern African.’

But her story is important to her and it needs to be told and listened to by more than just young people in Africa and Germany.

It touches on the greatness and the horror of all of us.

It is important because Ruth Weis was in the arena and not some comfortable viewing area when the bull was let loose.

And the story about Nazis and apartheid must never be forgotten. Yet even now, a cloud of mist rolls over both of them.

Soon, there will be no-one left who was there.

Ruth Weiss: ‘It is important for young people to be able to speak to the those who witnessed all this. That is why I am prepared to take on the role of talking to German audiences as long as I can.’

On that, Julian Manstead sums things up neatly –

‘It is evident that being a displaced person has had a profound influence on Weiss’s life and sense of identity, and this influence is reflected in her political views and her writing. She has personal experienced of being the target of discrimination and has also seen what it is like for other groups to be discriminated against. Her balance and her readiness to understand those who hold views contrary to her own are reflected in her writing.’

Ageless and ever active, Ruth Weiss is one of the most remarkable women of her age.

We are fortunate to have her.