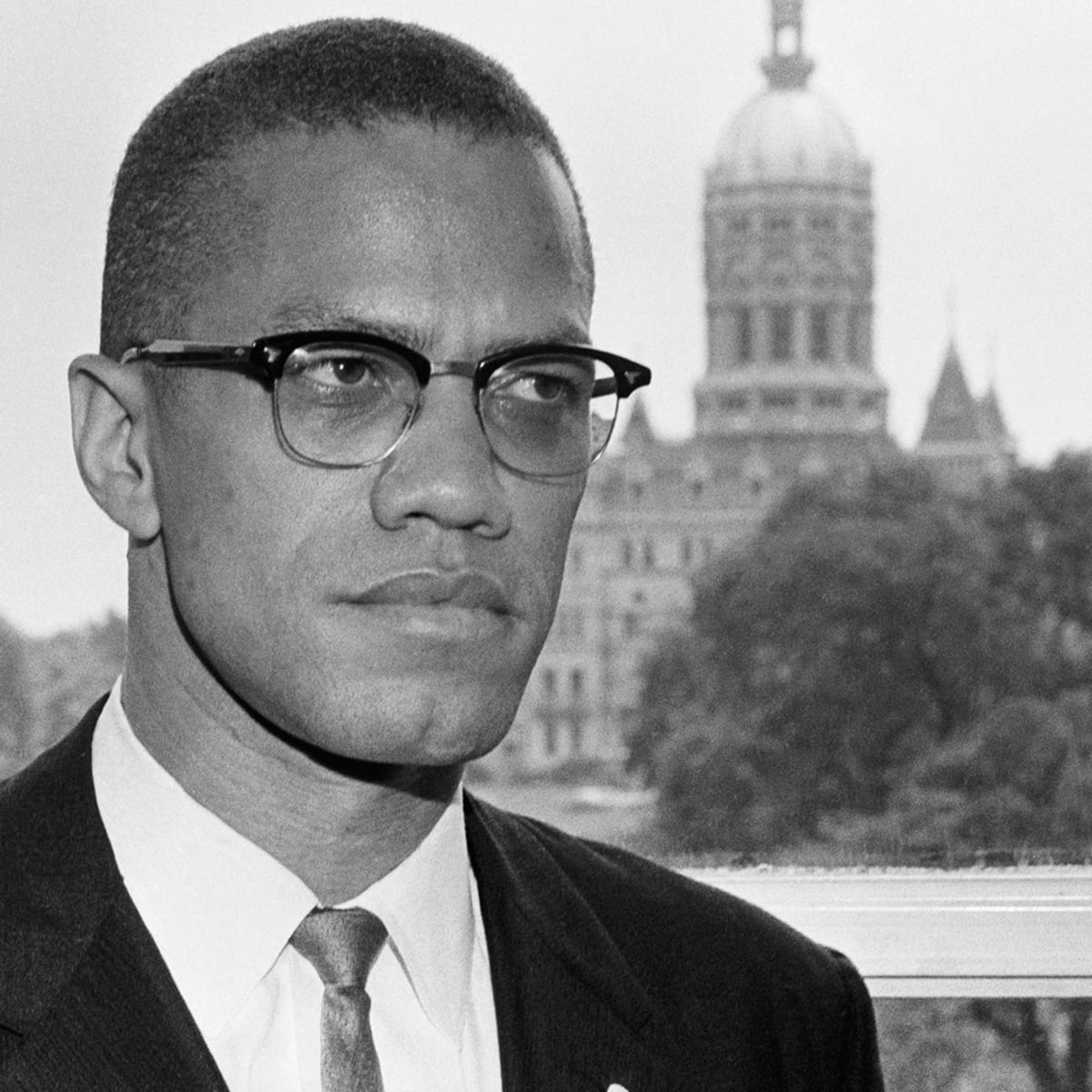 The Black Lives Matter movement demands that whites lift all the veils that have hidden their racial arrogance towards people of different skin tones and cultures. For such a long time.

South African apartheid was condemned by the United Nations as a crime against humanity.

How blacks fought white racism – or who thought they could change it from within rather from without – is a subject of un-ending interest.

A new book by the deceased American reporter Les Payne and his daughter Tamara about the life of Malcolm X (born 1925, assassinated in America in 1965) gives a glimpse of how Elijah Muhammad’s Nation of Islam, whose members included not only Malcolm X but also Muhammad Ali, made contact with the Ku Klux Klan with a view to setting up separate parts of America along racial lines.

Elijah Muhammad would not have embraced the word apartheid.

But what other word is there for what he advocated?

This new book is a door-stopper.

The Dead Are Arising – The Life of Malcom X, (Viking Press, 640 pp. £30) is the latest in a long list of books about a petty criminal called Malcom  Little who found religion which turned his life around.

As said, Elijah Muhammad’s pro-separation views were compatible with those of some white supremacists in America, South Africa and  Rhodesia.

The Paynes’ book tells us about how in 1961 Elijah Mohammed ordered Malcom X to open exploratory talks with leaders of the Ku Klux Klan (KKK) in Atlanta.

How the talks went still remain unclear. Some students of that time in America believe Elijah Muhammad’s motivation was money and that he wanted farm-lands in Terrell County.

The authors of the new book describe how Klansmen arrived at the home of a Nation of Islam minister, Jeremiah Shabazz, in the black Atlanta neighbourhood in a ten-car motorcade.

Malcolm X is quoted as saying the meeting had been authorised by Elijah Muhammad.

A Klansman identified as WS Fellows sought to break the ice by attacking Jewish people. The KKK had the nerve or the insolence to tell Malcolm X that blacks were not unhappy in the Southern States of the USA but that they were being stirred up by Jews to hate white people..

At that meeting, Malcolm X made his case for “complete separation of the races as opposed to segregation or integration.”

Fellows responded, saying –  ”Whatever you want. Call it what you like. As long as you stay over there and you’re glad to be black . . . good.”

Some say the meeting was infiltrated by the FBI and reported to Washington.

“I regard the Klan, the Anglo-Saxon clubs and White American societies, as far as the Negro is concerned, as better friends of the race than all other groups of hypocritical whites put together.”
― Marcus Garvey 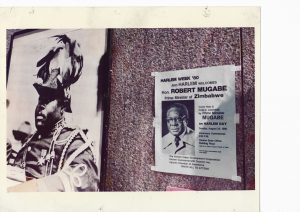 next to one another during the Zimbabwean

Prime Minister’s visit to Harlem in 1980.

gave his support for a separate black

Reading about this extraordinary meeting between the Nation of Islam and the Ku Klux Klan, I recalled how one prominent African leader in the 1960s – President Julius Nyerere –  reacted when he was asked to give support to the creation of a blacks only part of America.

In early 1970, Nyerere had gone to the office of The Standards newspaper in  Dar es Salaam to talk to indigenous and expatriate journalists about the need for a new-look socialist paper following his nationalisation of the press in December 1969.

The new managing editor was  Frene Ginwala, a South African ANC supporter who recruited several top flight British and South African reporters, one of them Richard Gott of The Guardian.

The meeting took place a few weeks after the Tanzanian Government adopted the Mwongoza Guidelines which were designed to enhance the role of the lower grade workers in Tanzania.

Nyerere was a man who cared little about money and was often accompanied by his colleague and friend, his State House gate-keeper and English-born Fabian special adviser, Joan Wicken.

From ‘Call Me Comrade’ by Trevor Grundy

The Standard went to bed early, with the cash-strapped advertising department hoping to sell a few hundreds more copies to audiences coming out of local cinemas around midnight.

One day, we were told by Frene Ginwala that the paper would be even earlier than normal because Mwalimu was going to come to the office, sit in the newsroom, explain what sort of socialist newspaper he wanted to see emerge after all the changes and then take questions from members of the staff and even messengers who were – thanks to the Mwongozo guidelines – to be seen as important (maybe more so) that middle class Tanzanians in prominent positions in  this African socialist society 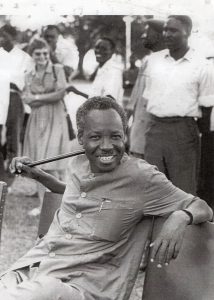 Yet another signed notice to this effect appeared on an already over-crowed newsroom notice board. Many of the memos reminded reporters that those fighting white rule in Africa were freedom fighters or guerrillas and not terrorists, and that Viet Cong should be deleted from Reuters copy and replaced with the South Vietnamese Liberation Front and that Mao’s regime was not in a ‘new’ China but in a China re-vitalised by revolutionary commitment and socialist thought.

Richard Gott roared with laughter when he told us that both the British High Commission and the American Embassy were upset with him for re-writing news stories written by journalists working for Reuters, the AP, the UPI and Agence France Press.

He spent a great deal of time with people who appeared as his close friends – Chinese officials. He let it be known to all who cared to listen that he detested the Soviet Union and its post-Krushchev leadership which was returning Russia to dark days under Stalin.

That night, dozens of seats appeared from nowhere and around 9 pm Mwalimu, Joan Wicken and several officials from State House and the Ministry of Information appeared, accompanied by at least a dozen plain clothes security men who spent all the time looking at us, never once at the great man at the top table who ruled our lives.

We sat waiting for Frene to introduce the honoured guests, me and Colin hungry but too nervous about eating our tuna and tomato sandwiches or drinking coffee from thermos flasks.

Nyerere sat next to his managing editor. Gott was at the back of the room, in a colourful katenge shir, stroking his red beard, surrounded by young black reporters.

Local reporters referred to her, sotto voce, as the memsahib.

Nyerere spoke so calmly and so well and the once angry faces of Frene’s new militant recruits from the now expatriate cleansed University of Dar es Salaam were calm, attentive, obedient.

Nyerere opened up with a warning -“It is stupid to rely on money as the major instrument of development when we know only too well that out country is poor. It is equally stupid, indeed it is even more stupid, for us to imagine that we shall rid ourselves of our poverty through financial assistance rather than our own financial resources. Firstly, we shall not get the money. There is no country in the world which is prepared to give us gifts or loans, or establish industries, to the extent that we would be able to achieve all our development targets. And even if all the prosperous nations were willing to help the needy countries, the assistance would still not suffice.” 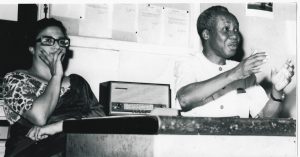 Frene Ginwala with Julius Nyerere in the newsroom

at The Standard in Dar es Salaam.

Three Afro-Americans came in late, apologized and sat down.

Nyerere said that independence did not mean a new flag at the top of a pole in an African football stadium.

It did not mean the replacement of white faces by black faces.

Joan Wicken handed him a piece of paper and he started to read.

“As early as 1897, James Connolly, the Irish socialist leader told fellow nationalists that if they were to remove the English army from their country and hoist their green flag over Dublin Castle it would not mean they had the won the fight.

He said: “This is what Connolly said and I suggest you all write it down and use it when you write your stories. He looked down and read again: “England would still rule you. She would rule you through her capitalists, through her landlords, through her financiers through the whole army of commercial individualist institutions she has planted in this country and watered with the tears of our mothers and the blood of our martyrs.”

I looked around and only Gott was taking notes.

Nyerere said: “Comrades. A power-hungry elite is emerging in this country and a privileged class is growing as powerful and as ruthless as the colonials we long ago expelled from our Motherland. Don’t ever be fooled by racists. They draw a red herring across the field and mislead the hounds. Guard the sacred flame we lit so long ago at the top of Mount Kilimanjaro and let that flame never die on top of that mountain or deep inside your hearts.”

I whispered to Colin – “But the World Bank has just been here. Will it let Tanzania do as it pleases?”

Colin thought a while and  nudged me. I expected something considered and profound.

“Let’s do a swap. Your cheese and tomato for my sausage roll with HP sauce?”

After a short break for coffee and tea, Gott asked the president if in the event of an attack by imperial agent’s expatriate socialists would be allowed to play a role as defenders of the nation?

Nyerere shook his head and said “No” and several hands were raised one belonging to an American who said that he was a friend and supporter of Robert Franklin Williams who in turn was a close associate of Stokely Carmichael and Walter Rodney.

His big question was – Would Tanzania support blacks  with guns taking over parts of the United States of America and forming a state which would be non-aligned and linked to the revolutionary forces of the Third World and the progressive governments around the globe, especially the Soviet Union, Cuba and China?”

For some unknown reason he turned his gaze on me and said in front of Nyerere and everyone there – “And I wish that honky with the big nose would stop staring at me. Is he supposed to be in here?”

Nyerere stood up and smiled in my direction and said: “I have spent my whole life fighting apartheid in South Africa, Rhodesia and the Portuguese colonies and racial hatred in my own country. Do you really believe I will condone the apartheid you suggest in America?”

Silence reigned and then the clapping started. I put down Colin’s sausage roll and joined in.

At the back of the room, the paper’s most senior messenger raised his hand and asked the last question of the night in Swahili which was then translated for the benefit of the Europeans in the room.

He asked Mwalimu if The Standard was a socialist paper?

Nyerere said the aim was to turn it into a socialist paper but that would take time.

The messenger then asked if under socialism all things were equal.

Nyerere smiled and said that Yes, that was the aim. All things should be equal.

The messenger then asked if all things were supposed to be equal why then  were some stories in the paper with  big headlines while others had only small headlines?

Nyerere smiled, looked at Ginwala who shook her head and smiled back.  Nyerere stood up and walked away, stopping only to talk to the messenger and then patting him on the shoulder and saying something in Swahili which made the messenger click his heels and give Nyerere a British army salute.

The black American turned to one of the men with him and said in a loud voice – “The guy’s a sell-out.”