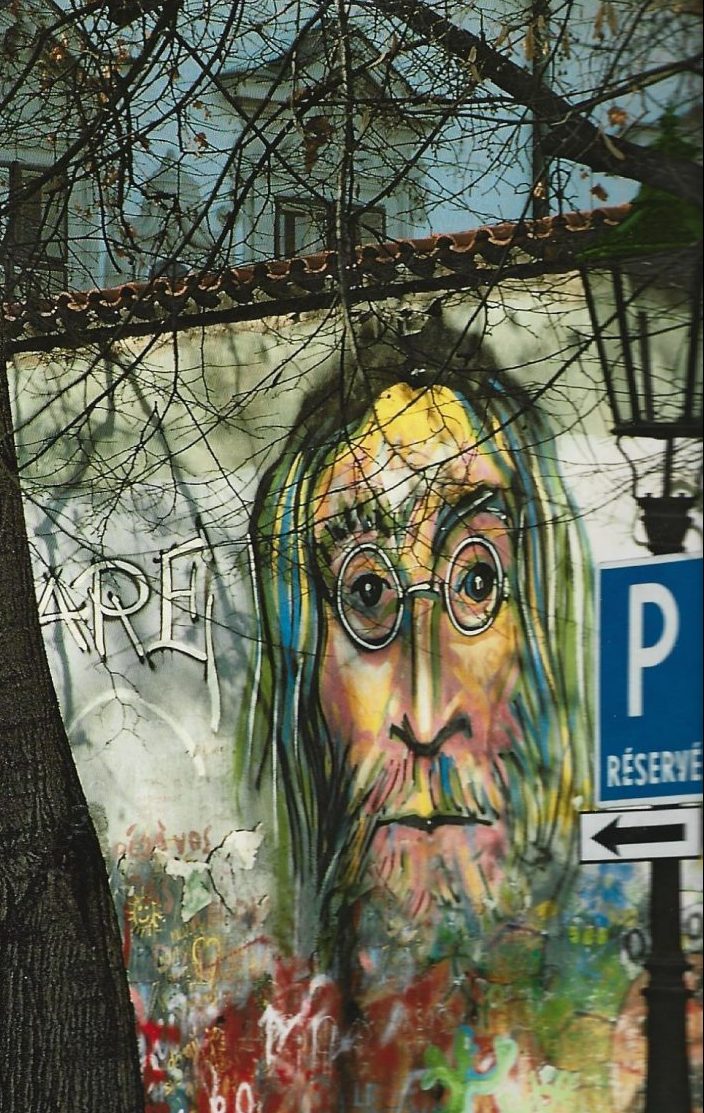 A wall painting of John Lennon in Prague where the British musician is idolised by the old and young – Picture: Trevor Grundy

For many people of my generation, news that John Lennon had been shot dead in New York on December 8, 1980 was as shattering as the moment we heard about the assassination of President Kennedy in Dallas in 1963.

Today, the fortieth anniversary of his murder – which some fans call an assassination – the pages dealing with music in the national press are devoted to the US$s 300 million deal Bob Dylan has made with Universal Music, part of the French conglomerate Vivendi.

He sold the rights of 600 songs recorded over a period of 60 years. And everyone knows the influence Dylan had on the Beatles, Lennon in particular.

The Times splashes the story. It makes no mention of an event outside the Dakota Building in NY forty years ago that, for a while, brought millions all over the world to silence and  a stunned standstill.

In an article in that same paper,  (6 October 2020) to mark Lennon’s 80th birthday, the columnist Melanie Phillips asked if Lennon deserved the Nobel prize or would his vision  of some kind of universal utopia be  sadly out of place today.

Imaging there’s no climate change would be like a child picking daisies in a field as someone drops a hydrogen bomb  on London.

Lennon’s friend, Elton John, said – “He was an uniter and was prepared to go to any lengths to make people see what his point was. And a lot of people, like the FBI  . . .they gave him a hard time but it didn’t deter him. He was peace-loving, brilliant, funny, opinionated, a treasure – we need people like him today.”

Can Nobel Prizes be awarded after someone’s death? Should Yoko be given one on John’s behalf? We’re now led to believe that she co-authored Imagine.

Alfred Nobel, the chemical engineer who invented dynamite, wanted the peace prize to be awarded to someone who had rendered “the greatest service to the cause of international fraternity, in the suppression or reduction of standing armies, or in the establishment of peace congresses.”

In 2009 Barack Obama got one after nine months in office.

In 1994 the prizes went to Yasser Arafat and Shimon Peres of Israel.

In 1973, Le Duc Tho, the North Vietnamese community leader, got one. So did Henry Kissinger.

So, good on Melanie Phillips for raising the matter while wondering what sort of person Lennon would have turned into had he lived to mark his 80th. And what the world would be like with no heaven above us, no hell below, no countries and no religion, too.

If  schemers turned into dreamers, what then?

Said Phillips: “It would be a world of meaninglessness and with no attachments that matter, the weak would be defenceless against being picked off by the strong. Nevertheless, that song became the unofficial anthem for universalism and moral equivalence, the beliefs that prevail today in the West.

“A sentimentalised belief in peace and love, avoiding the difficult choices, humility or courage, necessary to achieve either. Sounds like the perfect qualification for a prize that defines our present era.

“Perhaps John Lennon at 80 would have seen where his brand of utopianism had let us.”

When the American poet Allen Ginsberg was asked if that famous chant “All you need is love” was enough, he said “No, it is not. Love on its own is not enough.

“All you really need is justice,” he said.