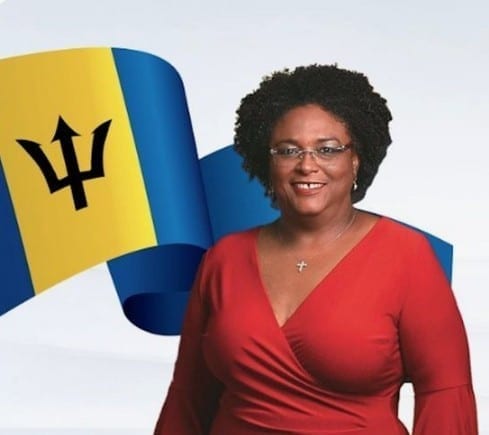 Barbados Prime Minister, Mia Mottley:  The royal future in Australia Canada, and New Zealand is also under the political microscope of constitutionalists, politicians and religious leaders.

It will be a polite and gentle way of saying “thanks and goodbye” to Queen Elizabeth II on November 30, the 55th anniversary of Barbados’s independence, when it will remove the Queen as its head of state and become a republic.

Remember that date. You might hear the sound of butterflies flapping their wings in faraway places causing an avalanche much closer to home if you’re British (see note at end).

What’s soon to happen in tiny Barbados is the equivalent to someone handing Humpty Dumpty a mask but forgetting to tell him that the wall’s crumbling and about to come crashing down.

The first president of the post November 30 set-up in Barbados will be its present governor-general, Dame Sandra Mason, who now represents the Queen in the tiny Caribbean nation.

“This is the way we want to go”, said Prime Minister Mia Amor Mottley. “And we want to thank her excellency for so graciously consenting in this manner.“

“This is the ultimate statement of confidence in who we are and what we are capable of achieving,” she added.

In a speech delivered at Bridgetown, capital of this small eastern Caribbean nation (population 290,000) PM Mottley re-assured the country’s small band of British royalists (about three percent of the population) that little will change at the end of next month.

And to underscore British royalty’s commitment to a future world without racial prejudice, the world was informed that the Queen and her family are 100 percent against racism and are strong supporters of the Black Lives Matter (BLM) movement.

This pledge followed accusations by Prince Harry, now in California with his wife Meghan Markle, that certain un-named members of the royal family are racists.

Harry, who was once voted the most popular man in Britain, is the Queen’s grandson and brother of William, married to Kate Middleton, royalty’s most publicised royal-commoner stand-in for the late Princess Diana.

The Barbados prime minister’s pre-Republic Day speeches give fresh meaning to the French saying – Plus ca change, plus c’est meme chose (the more things seem to change, the more they stay the same”.

That’s not all she said.

She also spoke about modernising Barbados’s constitution, as soon as the island settles into its  new status of republic.

“We feel that, if we are going to have a new constitution eventually, that is going to reflect who we are in the third decade of the 21st century.”

Her Majesty and her advisers far away in London hope that the links between the two countries will continue into the future.

But they should not be too complacent.

The flapping of so many wings in the Caribbean and other parts of the world could cause an avalanche at Buckingham Palace.

The move towards republicanism in Barbados comes at an interesting time for Barbados will be following in the footsteps of other Caribbean countries which have opted for a home-grown head of state rather than a foreigner so far away.

Guyana became a republic in 1970, followed by Trinidad and Tobago and Dominica in 1978.

Now commonwealth watchers in London say the announcement from Barbados have seen social media users in other Caribbean islands urging their government to follow suit.

The Queen is head of state in several Caribbean islands, including Antigua, the Bahamas, Grenada, Jamaica, St Kits and Nevis, St Lucia and St Vincent and the Grenadines, the leaders of whom will all be closely watching events in Barbados.

Meanwhile, royalty’s future in Australia Canada, and New Zealand is also under the political microscope of various constitutionalists, politicians and religious leaders.

The Big Question is a simple one: Who needs them?

Next year marks Elizabeth’s Diamond Jubilee – 70 years as Queen. She was crowned at Westminster Abbey in 1952 and has reigned longer than any other king or queen.

But next year she’ll be 96; her eldest son and heir to the throne, Prince Charles, will be 73. He’s very unpopular, despite what royalist scribblers say.

As for his brother, Andrew, who hopes to make a public comeback in time for the Queen’s 70th  gang-bang, the least said the better.

Come hell or high water, they’ll all be with her, rings on their fingers and bells on their toes.

However, an increasing number of her subjects have started to see the Royal Family as a farcical institution that is past its sell-by date.

How long can the tricks go on?  Are there any rabbits still in the magician’s top hat?

When will the lion turn on its tamer?

When will the audience pick up the bucket full of water and toss it into the face of the clown?

For the answers, you should cup you ear, and turn your head towards the Caribbean.

Can’t you hear it? The sound of those tiny butterfly wings?

(First published in the October 2021 issue of Cold Type magazine)