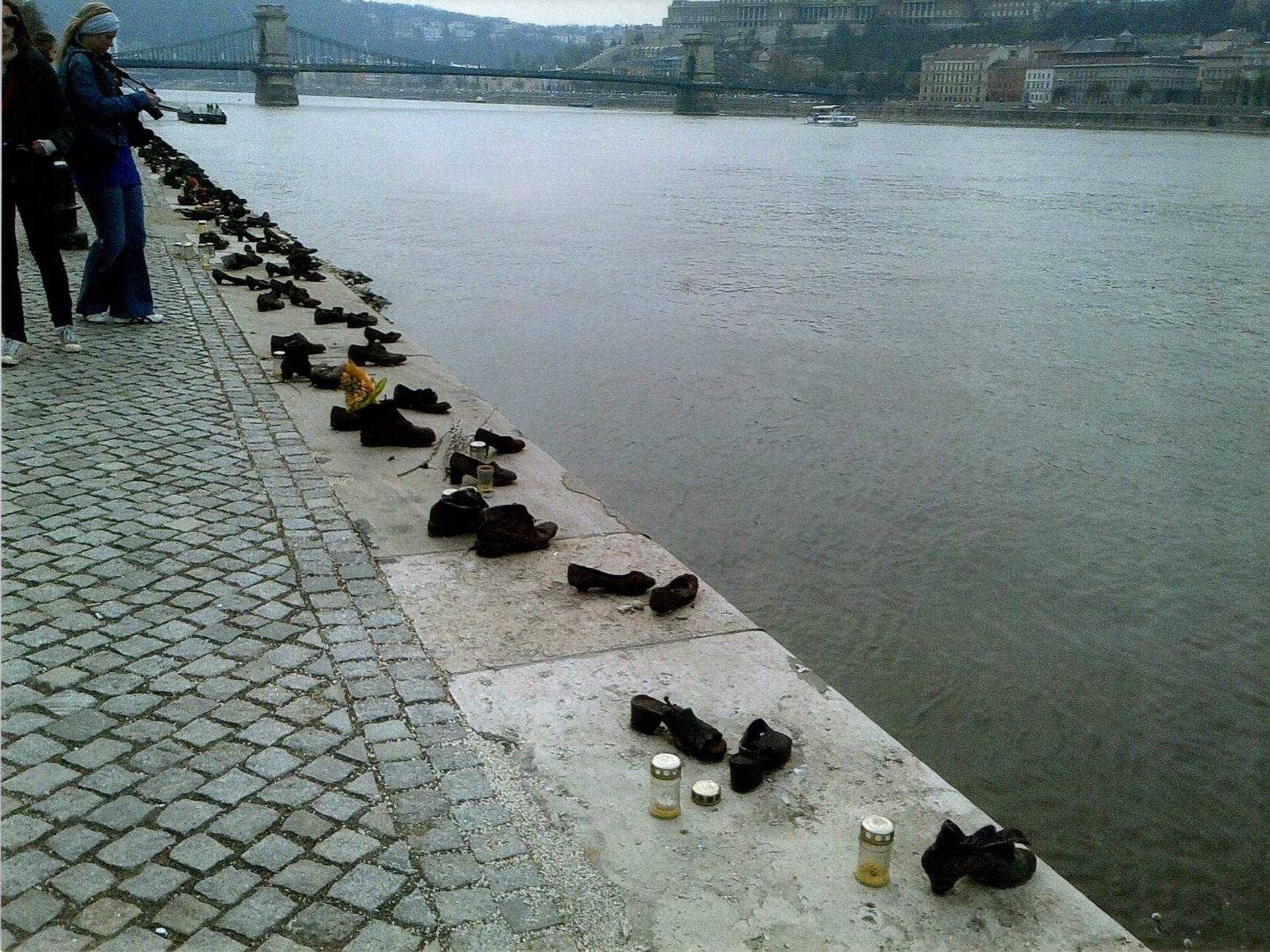 Jews in Hungary are this week remembering the “liberation” of Budapest after a 50-day siege by the Red Army 75 years ago on February 13, 1945.

It comes at a time when memories about the war begin to fade. In that vacuum, hatred finds a home.

The oldest hatred  is on the march again.

Not only in Hungary but also in large parts of the countries that once formed the Soviet Union, Western Europe, the United Kingdom and parts of the USA.

She was 19 when the Arrow Cross party seized power in the autumn of 1944 when about 70,000 Hungarian Jews were herded into a small area comprising 162 apartment buildings, surrounded by wooden planks.

On January 27 world leaders gathered at Jerusalem to mark the 75th anniversary of the liberation of Auschwitz, also by the Red Army.

Among other things, they denounced the return of anti-Semitism in different places, particularly in countries that until 1990 were part of the vast Soviet Union.

Hungary but one of them.

The situation in Hungary is of concern with European newspapers, TV and radio stations all monitoring widely reported incidents of anti-Semitism.

There are an estimated 50,000 Jews in Hungary today. Before the Second World War there were around 800,000. 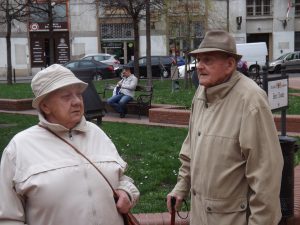 Jews from around the world fly to Budapest, many to touch base with their spiritual homeland before the start of the Nazi era in Germany in 1933. (Picture: Trevor Grundy)

Most live in Budapest, its centerpiece being the magnificent Dohany Street Great Synagogue, the second largest in the world.

Opinions differ widely about the extent of anti-Semitism in Hungary.

A report from Berlin in The Times (March 30, 2019) by Oliver Moody said that Hungarian Jews feel that anti-Semitism is strong.

Andras Kovacs, professor of Jewish Studies at the Central European University in Budapest, estimated that the number of Hungarians who wanted Jews to leave their country has doubled from 12 percent in 2006 to 24 percent in 2017.

“Today,” wrote Moody,”30 percent would like to see limits on the number of Jews who can work in certain jobs, compared with only 16 perecent in 2013.”

Professor Kovacs, 72, said that the most obvious reason for the increase was the rise of Jobbik, an ultra-nationalist party claiming it was formed to protect traditional Christian Hungarian values.

Viktor Orban, the right-wing prime minister and leader of the Fidesz party, has declared a zero tolerance policy on anti-Semitism. 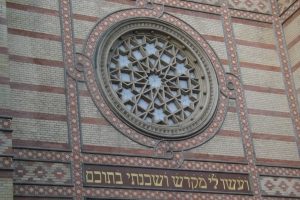 But the leaders of Jobbik and Fidesz seek to rehabilitate the reputation of Admiral Milos Horthy who ruled Hungary from 1920-1944 and oversaw the deportation of tens of thousands of Jews to Nazi concentration camps.

Mr Orban, 56, has hailed Horthy as an “exceptional” statesman and sought to portray the Hungarian Holocaust as an almost entirely German persecution inflicted on Hungary.

Moshe Kantor, President of the European Jewish Congress has condemned the “minimization” of Hungary’s active role in the Holocaust.  Moody quoted him saying: “Any attempt to equate the systematic extermination of Jewish lives with the situation faced by the wider Hungarian population during the Nazi occupation sets a dangerous precedent.”

Most Jews say that Admiral Horthy was partly – if not entirely – responsible for the death of an estimated 600, 000 Hungarian Jews.

But not all members of Hungary’s ruling party have a warm spot in their hearts for Horthy.

Zoltan Pokorni, a prominent member of Fidesz said at an event marking the murder of Jews in his country – “The victims were Hungarians, as were most of the killers.”

Today, many Hungarians are angry that so many outsiders point figures at them when there are so many anti-Semitic acts in America, in the UK and other parts of Europe. 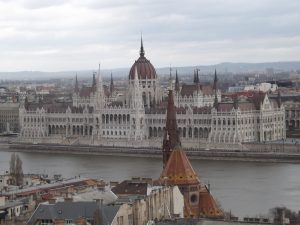 Budapest – one of Europe’s loveliest cities – is full of history, art, culture and science. But many of its young people know little about the darkness on the other side of the coin and the Iron Shoes along the Danube memorial is a stark reminder of past horrors that have left open wounds that need to be healed, not ignored. (Picture: Trevor Grundy)

In Hungary every summer, there is a Jewish street festival, the Judafest, and the Budapest Jewish Film Festival takes place every year in November.

Not so long ago I walked along one of the main streets in Budapest with a young Jewish girl. She was dressed entirely in blue and white. A walking Israeli flag.

A street musician waved  his violin at us and played the If I was a rich man song from Fiddler on the Roof. 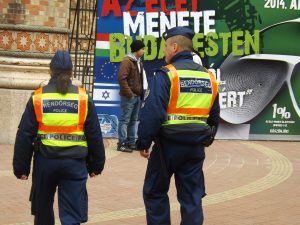 Police on duty outside the magnificent Dohany Street Great Synagogue in Budapest . . . just in case of what ? (Picture: Trevor Grundy)

In 2006, I was invited by the Hungarian government  to meet Hungarian leaders in Budapest and Esztergom to mark the 50th anniversary of the suppression by the Soviets of the Hungarian Uprising in October 1956.

I met and interviewed a large group of the men who, in 2006, headed-up the influential Confederation of Jewish Communities of Hungary.

The organisation’s Acting Director, Gustav Zoltai, spoke about the unspeakable horror of the German occupation and the even worse take-over by the anti-Jewish Arrow Cross movement at the end of 1944.

Professor Erno Lazarovits, that organisation’s Director of Foreign Affairs, told me that even the Gestapo was surprised to see Hungarian who had lived alongside Jews for centuries join in a spectacle of horror alongside the famous blue Danube which for a while turned red.

Since 2006, I have re-visited Hungary, a country I admire and whose people have made such outstanding contributions to European culture, especially in the fields of literature, music and art. 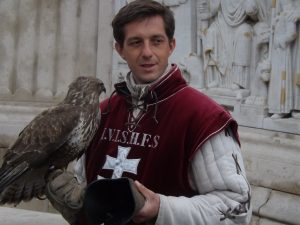 Hungary welcomes tourists from around the world and the government has declared Zero Tolerance when it comes to anti-Semitism (Picture : Trevor Grundy)

Hungary’s complicity in the Holocaust is remembered by the old but almost ignored by the young.

“There are so many memorials to what we Hungarians are supposed to have done but so few memorials to what the bloody Russians did to us,” said a young Hungarian I’d helped with his English several years ago. Todayhe is a middle-aged businessman who travels widely in Europe, the UK and USA.

“Memorials everywhere to the Jews who were killed during the Holocaust,” he said “What about the millions of people Stalin killed, the 10 million who starved to death during the 1933/1934 famine in the Ukraine. I know Russians who say no-one ever went hungry under Stalin’s rule. They just don’t know because there are no memorials. But everywhere you go now in Europe or America – memorials to Jews. There’s so many of them, they no longer have any kind of impact.”

“We still don’t admit the war was even partly our fault because many of our people died. A photograph on every mantelpiece. And all this mourning has veiled the truth. It’s not so much lest we forget as lest we remember. But you should realise the Cenotaph and the Last Post and all that stuff is concerned, there’s no better way of forgetting something than commemorating it.”

One of them is in Budapest and certain to break the hearts of all but the most loathsome of Jew haters. 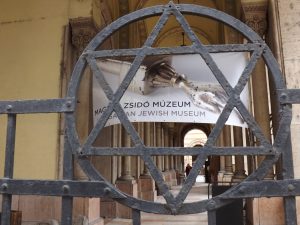 Conceived by film director Can Togay , he created it on the east bank of the Danube River with sculptor Gyula Pauer to honour the Jews who were killed by Arrow Cross militiamen.

The sculptor created sixty pairs of period-appropriate shoes and boots out of iron, The shoes are attached the  stone embankment and behind  them lies a 40 meter long,  70 cm high stone bench,

Most of the murders along the edge of the River Danube took place around December 1944 and January 1945 when members of the Arrow Cross police (Nyilas) took as many as 20,000 Jews from the newly established Budapest ghetto and executed them. They either shot them dead and then hurled them into the frozen river or bayoneted them live into ice and water.

But before that happened, the victims were ordered to remove their shoes at gunpoint. Shoes, boots, sandals, slippers. These were all were valuable commodities as a 50- day siege of Budapest brought any sign of normal life in Budapest to a standstill. 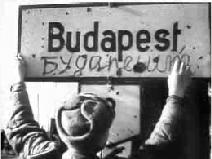 The last time I was in Budapest, I met a just married couple who worked in Tel Aviv for the government, so they weren’t allowed to talk to journalists about anything  to do with politics.

I watched the girl’s face when the guide explained to her what the shoes along the river were all about.

He looked down. She looked up. They walked away.