Forty years after his brutal murder hope rises for the canonisation of Zimbabwe’s “leper saint.”

On the 5th September 1979, a group of Robert Mugabe’s guerrillas (ZANLA)   kidnapped and then slaughtered the former head of a leper colony in Rhodesia (Zimbabwe).

They took him into the bush and subjected to him to mockery in front of a crowd of local people. He was offered women to sleep with. They tried to make him dance and eat excrement.

The following day, he was interrogated.

What was a white man doing helping blacks? Why? Who was he? Was he a spy? An agent of the hated white leader, Ian Smith?

The man stood still, emulating Jesus at his trial. He said nothing. He knelt down and prayed.

After the “trial” he was marched out of the bush towards the main road close to the small town of Mutoko, 50 miles from the border with Mozambique.

He was then told to halt, turn and face men with guns, kneel down and pray.

When he rose, his body was riddled with bullets and his half-naked body was left by the roadside.

The man known to his friends in Zimbabwe and in Britain as “the leper’s saint” was also a poet of considerable note. Shortly before his tragic death, he wrote lines that could be his epitaph –

We want to make it very clear

And easy for you all.

The casting out, by Love, of fear

He was a good looking, well-educated, upper-middle-class Englishman who had fought as a Gurkha officer during the Second World War. 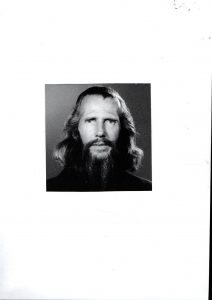 He was religious and in the late 1940s became a Roman Catholic but did not pursue his original desire to become a monk. Instead, he did odd jobs – teaching, caretaking, forestry, but never settling down or falling in love.  He was musical with a fine voice.

He told friends he was a troubadour from another age. He wandered the world but eventually went to Rhodesia at the suggestion of an old Gurkha friend who had become a priest, Father John Dove.

In 1969, he went to Mutemwa, about 90 miles east of Salisbury (Harare) where he came across the leper colony where he found his life’s work and in September 1979, his death.

The 80 or so lepers who lived at Mutemwa Leprosy Settlement ( Mutemwa in Shona means ‘you are cut off’) were badly neglected.

They were dirty. They were hungry. The roofs of their huts caved in when heavy rain fell. John Bradburne decided to stay with them, driving out the rats that gnawed the flesh of helpless men and women. He tried to meet their everyday needs. He helped build a small church. He organized the music they loved.

I visited Mutema many times when I lived in Rhodesia/Zimbabwe from September 1977 to October 1996 and alongside Father Dove and others saw lepers at Mass, banging drums with the stumps of their hands, their bodies swinging in time to A Shona-designed mass.

One of Britain’s best known journalists Charles Moore visited Mutemwa in 1994 and told readers of the paper he edited (The Sunday Telegraph) how Bradburne fell out with the Zimbabwe Leprosy Association which, in theory, ran Mutemwa. Wrote Moore:” He hated the fact that it wanted the lepers to be known only by numbers and refused to do this. He gave every leper a name and wrote a poem about every one of them. He was reprimanded for extravagance because he insisted that every leper should have at least one loaf of bread a week.”

Bradburne poured the lot into as bowl and encourage the lepers to drink up.

“What a party that turned out to be, “said the late John Dove, one of the many Roman Catholic priests who believed Robert Mugabe was a man of courage and unwavering principles.

Bradburne was expelled from the leper settlement and went to live in a tent on the mountain over Mutemwa. A white farmer gave him a tin hut which was ice-cold in winter, and like an over in the summer. There was no electricity or running water and between 1973 and his death John Bradburne stayed there. He stayed in contact with the lepers, writing them, songs, encouraging them to pray. While not attending to them, he lived the life of a hermit, eating little, writing poetry and praying, often climbing the nearby mountain where he stood alone worshipping his god.

Why was he slaughtered on September 5 all those years ago?

No-one knows for sure and while Robert Mugabe was President of Zimbabwe very few examined what happened.

Mugabe was brought up as a Roman Catholic and he would not have taken kindly to those who revealed that some of his supporters had killed a man who might well be Zimbabwe ‘s first saint.

One evil which infested Mutemwa during Bradburne’s days there was theft. It was easy to steal food, drink and blankets from blind or lame patients. John Bradburne battled endlessly with these thieves.

An official Mutemwa Leprosy Settlement publication says –“Eventually, in the liberation was (1966-1979) they (guerrillas) plotted to kill John to get him out of the way.”

After his death, a cult of him grew up. Charles Moore wrote that “miraculous drops of blood are supposed to have fallen from his (sealed) coffin at is funeral. Many pilgrims come to his shrine at Mutemwa and some claim to have been healed by his intercession.

A thriving John Bradburne Society (www.johnbradburne.com) assists the case of his canonization and the Winter 2019 newsletter says that now – forty years after his death – the official start of John’s Cause for becoming a saint was finally launched in Zimbabwe.

The newsletter tells us –“For the past 40 years, there have been countless efforts by many to try to get John’s case heard to mark him as a Saint, but sadly to no avail. Last year in 2018 something happened. There was light and JBMS approached Dr Enrico Solinas from Perugia, Italy, to be the postulator of John Bradburne’s Cause.

A special Mass, attended by 400 clergy and 15, 000 people, was held at Mutemwa on 5th September, 2019 marking the official opening of the process of John Bradburne’s  road to Sainthood.