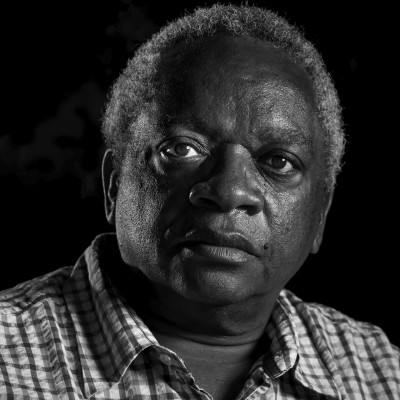 When Alexander Joe retired after working in Africa for over thirty years, he went to Madagascar with his wife and told friends that his new life on one of the world’s most beautiful islands was a dream come true.

“It was a dream come true because for the first time I was able to take pictures of ordinary people at work and play. It was so refreshing after decades covering some of Africa’s worst hot-spots – its  famines and its wars.”

Like dozens of top  war-scarred  photographers and journalists, the man we called AJ wanted to capture the world of men, women and children living lives in peace.

“I had often thought that I was born in the wrong place at the wrong time because I had missed out on making the kind of images that I really liked.

“In Madagascar scenes of ordinary people enjoying their lives – men and women and their children at work and play –  were all on my doorstep every time I opened my front door.”

For a long time, AJ photographed villagers living next door to him in Antehiroka, north of the capital city Antananarivo.

For a photographer, the place is buzzing.

Madagascar is largest island in the Indian Ocean . It contains people of all ethinc groups. Agriculture  employs about  80 percent of Madagascar’s workforce in a population topping 27 million. 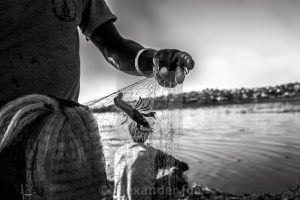 At the start of this year, Alexander planned his first major exhibition .

But as we all know – life is what happens to you while you’re busy making other plans.

Says AJ – “My initial plan was to have an exhibition in the village where I live and to then encourage local people to come and see the pictures I’d taken of them.

“I’m not one of those photographers who likes their work  to seen only by the select few, well-framed pictures hanging in remote white-walled buildings.”

In that positive frame of mind, he planned a new kind of exhibition.

“When lock down rules eased, I placed an empty frame in a part of Antehiroka where I had planned the pre-virus exhibition.

“I knew that I couldn’t place framed pictures on a village wall because of the need for social-distancing. People would have gathered, possibly jostled one another and that would have been dangerous.

“So, instead, I filmed villagers going to the marketplace, planting rice, fishing and living their lives onto a single empty frame.

“Later, I digitally added my still photos onto the empty frame and by doing that I was able to hold an exhibition.”

He added:  This is not the kind of exhibit I expected for my photographs. But Covid-19 inspired me to do something different.”

Right now, the world’s glitzy arts fairs and shows are on hold, replaced with Zoom studio tours and virtual exhibitions.

The art market is also ailing.

Many galleries are likely to go out of business and artists will lose their livelihoods.

“It’s a pivotal moment,“ says Frances Morris, director of the Tate Modern in London.  “We’re going to talk in  terms of before and after Covid-19. The virus will change a lot of things for art.”

It has done that alright.

But in Madagascar there’s at least one man with an idea that could keep photographic exhibitions  up-and-running – an act of love in the time of the Coronavrius.

Alexander Joe began his career in 1975, documenting the political struggle of blacks in his homeland, known first as Rhodesia and then Zimbabwe. He started off with the Rhodesia Herald and later on moved to London where he worked for The Times, The Observer and the Daily Mail. He returned to Zimbabwe in 1983, starting a three decade career as a staff photographer with Agence France- Presse (AFP). From  posts in Harare, Nairobi and Johannesburg Joe covered 13 countries, documenting wars, famine and protests. Among  the highlights of his career was photographing Nelson Mandela’s release from prison in 1990.  Joe is now based in Madagascar and concentrates on social documentary photography.