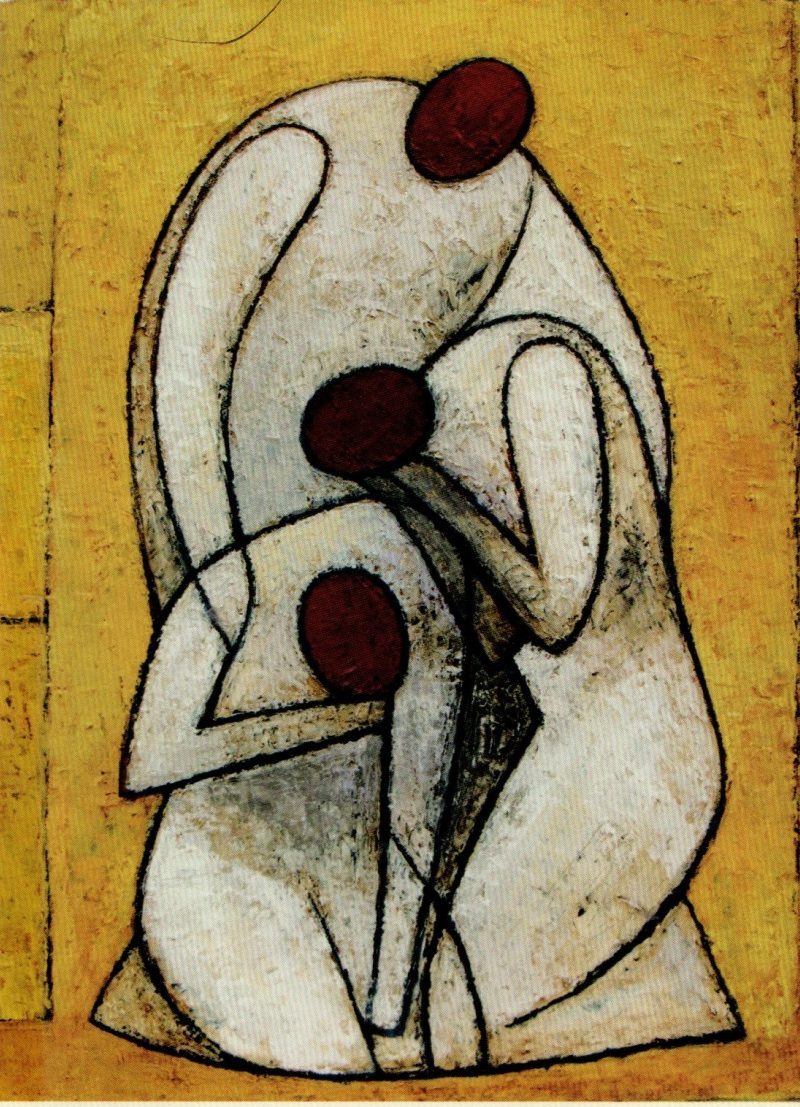 The editor of the  prestigious medical journal The Lancet has hit out at Boris Johnson’s government over the way it has handled the  corronavirus epidemic and condemning it as a “national scandal”.

Richard Horton said the government had known since January that COVID-19 was coming to the UK but had “wasted February” by failing to ramp up testing or ensure there is enough personal protective equipment (PPE) for NHS staff.

Speaking on BBC’s Question Time on Thursday MArch 26, 2006) night, Horton said: “Sorry to say this but it’s a national scandal. We shouldn’t be in this position.”

He said: “We knew in the last week of January that this was coming. The message from China was absolutely clear that a new virus with pandemic potential was hitting cities, people were being admitted to hospital, admitted to intensive care units and dying and the mortality was growing.

Extracts from The Lancet article. 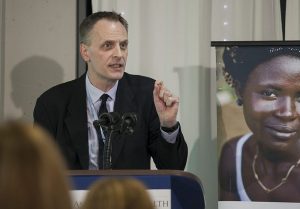 The editor of The Lancet is Richard Charles Horton

“When this is all over, the NHS England board should resign in their entirety.” So wrote one National Health Service (NHS) health worker last weekend. The scale of anger and frustration is unprecedented, and coronavirus disease 2019 (COVID-19) is the cause. The UK Government’s Contain–Delay–Mitigate–Research strategy failed. It failed, in part, because ministers didn’t follow WHO’s advice to “test, test, test” every suspected case. They didn’t isolate and quarantine. They didn’t contact trace. These basic principles of public health and infectious disease control were ignored, for reasons that remain opaque. The UK now has a new plan—Suppress–Shield–Treat–Palliate. But this plan, agreed far too late in the course of the outbreak, has left the NHS wholly unprepared for the surge of severely and critically ill patients that will soon come. I asked NHS workers to contact me with their experiences. Their messages have been as distressing as they have been horrifying. “It’s terrifying for staff at the moment. Still no access to personal protective equipment [PPE] or testing.” “Rigid command structures make decision making impossible.” “There’s been no guidelines, it’s chaos.” “I don’t feel safe. I don’t feel protected.” “We are literally making it up as we go along.” “It feels as if we are actively harming patients.” “We need protection and prevention.” “Total carnage.” “NHS Trusts continue to fail miserably.” “Humanitarian crisis.” “Forget lockdown—we are going into meltdown.” “When I was country director in many conflict zones, we had better preparedness.” “The hospitals in London are overwhelmed.” “The public and media are not aware that today we no longer live in a city with a properly functioning western health-care system.” “How will we protect our patients and staff…I am speechless. It is utterly unconscionable. How can we do this? It is criminal…NHS England was not prepared…We feel completely helpless.”

The NHS has been wholly unprepared for this pandemic. It’s impossible to understand why. Based on their modelling of the Wuhan outbreak of COVID-19, Joseph Wu and his colleagues wrote in The Lancet on Jan 31, 2020: “On the present trajectory, 2019-nCoV could be about to become a global epidemic…for health protection within China and internationally…preparedness plans should be readied for deployment at short notice, including securing supply chains of pharmaceuticals, personal protective equipment, hospital supplies, and the necessary human resources to deal with the consequences of a global outbreak of this magnitude.” This warning wasn’t made lightly. It should have been read by the Chief Medical Officer, the Chief Executive Officer of the NHS in England, and the Chief Scientific Adviser. They had a duty to immediately put the NHS and British public on high alert. February should have been used to expand coronavirus testing capacity, ensure the distribution of WHO-approved PPE, and establish training programmes and guidelines to protect NHS staff. They didn’t take any of those actions. The result has been chaos and panic across the NHS. Patients will die unnecessarily. NHS staff will die unnecessarily. It is, indeed, as one health worker wrote last week, “a national scandal”. The gravity of that scandal has yet to be understood.

England’s Deputy Chief Medical Officer, Jenny Harries, said on March 20, 2020: “The country has a perfectly adequate supply of PPE.” She claimed that supply pressures had now been “completely resolved”. I am sure Dr Harries believed what she said. But she was wrong and she should apologise to the thousands of health workers who still have no access to WHO-standard PPE. I receive examples daily of doctors having to assess patients with respiratory symptoms but who do so without the necessary PPE to complete their jobs safely. Health workers are challenged if they ask for face masks. Even where there is PPE, there may be no training. WHO standards are not being met. Proper testing of masks is being omitted. Stickers with new expiry dates are being put on PPE that expired in 2016. Doctors have been forced to go to hardware stores to buy their own face masks. Patients with suspected Cocid-19 are mixing with non-Covid-19 patients. The situation is so dire that staff are frequently breaking down in tears. As one physician wrote, “The utter failure of sound clinical leadership will lead to an absolute explosion of nosocomial COVID-19 infection.” Front-line staff are already contracting and dying from the disease. 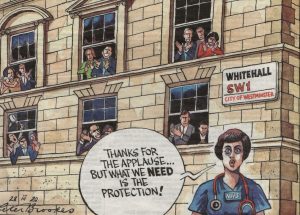 The government’s much-vaunted delivery of personal protective equipment (PPE) is finally arriving in the hands of some NHS staff – even though the Department of Health claimedit had all been delivered over the past two weeks.

But NHS workers on the front line are reacting with horror – though not disbelief – because the equipment, including masks and other PPE is clearly old, expired and has simply been re-dated with a new expiry date.

Nurses are posting pictures of the equipment they have received – and the old, long-past dates are still clearly visible underneath the hastily-applied new labels:

The fact that NHS staff were being given expired equipment is not new – The Lancet editor Richard Horton tweeted about it last week:

NHS COVID-19 UPDATE: “Totally inadequate PPE. No N95 masks. Being sent like lambs to the slaughter.” “Could you please highlight that there is still not enough PPE.” “The current policy of PPE triage is unreliable and not fit for purpose.” And this: expired supply. pic.twitter.com/Kr7rZB4MFF — Richard Horton (@richardhorton1) March 24, 2020

But the government is now trumpeting its supposed new deliveries of life-saving PPE – which appear to consist of the same expired equipment re-labelled.

So hasty has been the re-labelling that in some cases even the new sticker is expired, with some of those involved in printing new stickers reverting under pressure to 2019 instead of 2020:

An article headlined “A cause for concern” by Jessica Hamzelou said that as the covid-19 pandemic rages on, governments are turning to teams of scientists for guidance on how to proceed. On March 20, the UK Governmenr finally published the scientific advice it had received.

“At first, most commentators welcomed the transparency. But closer reading of the documents made available online suggests a few causes for concern. The strongest advice from the World Health Orgaisation (WHO) on controlling outbreaks of the coronavirus – abundant testing – barely gets a mention, for example. And the guidance  seems to lean heavily on a single model of the outbreak, one that some scientists suggest contains systematic errors.” 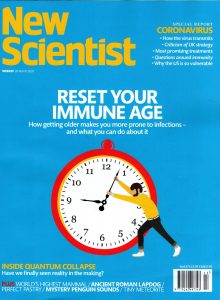 The report said that the UK government gave “barely a mention” of widespread testing, despite the WHO director-general’s plea to all countries to “test, test,test.”

It continued: “As the WHO’s assistant director[ general Bruce Aylward told New Scientist last week, the countries that are best able to control outbreaks of the virus are those extensively testingf people who might be infected, isolating them away from their friends and relatives and tracing who they have been in contact with. The UK guidance doesn’t mention this.”

The report said that the UK government guidance reports draw heavily on models of how the outbreak will develop with various interventions.

These models all come from one team, based at Imperial College, London.

The report quoted Paul Hunter at the University of East Anglica, England, who said: “It comes across as though they have based everything on the Imperial model.”

Chen Shen at the New England Complex Systems Institute in Cambridge, Massachusetts, and his colleagues, argue that the Imperial team’s model is flawed and contains “incorrect assumptions.”

Hamzelou wrote that stricter restrictions on movement were announed on March 23. “Before then, there appeared to be plenty of confusion among  members of the public. “This explains why stronger measures are now in place in the UK, requiring most people to stay at home else risk fines or dispersal.”.

And – “Part of the problem is that communciations from the government haven’t been clear enough, says Hunter. One way to clarify would be to swap the use of vague terms like social distancing with clear advice such as to keep a physical two-metre distanc between youself and others.”

The article’s strap -line  reads: “The UK government has released the scientific advice it has received on covid-19 and  independent experts aren’t impressed.”