Trevor Grundy makes the case for Samora Machel, rather than Margaret Thatcher

In a two- page obituary (four colour pictures and one black and white) highlighting the life and times of Robert Mugabe published in The Times on Saturday 7th September 2019, the late Zimbabwean President from 1980 to 2017 is quoted making a little known statement to some of his followers following the overthrow of Margaret Thatcher by her Cabinet colleagues in November, 1990. The well-written and balanced obituary said that Mugabe rebuked his followers for cheering when they heard the news about her downfall and said to them: “Who organized our independence? Let me tell you – if it hadn’t been for Mrs Thatcher none of you would be sitting here today. I’m sorry she’s gone.”

It might come as a surprise to many Zimbabweans to learn that neither the Zimbabwean despot nor his sycophantic followers would have been in Parliament but for Margaret Thatcher.

Commonwealth pundits in London might disagree but there does seem strong case for asserting that the person most responsible for Mugabe being in power in Zimbabwe from 1980 to 2017 was not Margaret Thatcher but, rather, the quasi-Marxist President of Mozambique, the late Samora Machel.

After Mugabe’s release at the end of 1974 after a decade in Rhodesian prisons, Mugabe and his side-kick Edgar Tekere made an easy “escape” from Rhodesia to Mozambique where the majority of the largely Shona-affiliated guerrillas were based.

The conventional wisdom is that Mugabe was immediately welcomed by Machel who used his own formidable military skills to turn a book-man with nine degrees into a man of war.

Before I left Zimbabwe (I lived and worked there as a journalist from 1980 to 1996) I spent several months interviewing the nationalist leader James Chikerema. He shed light on another side to the relationship between the two men.

Chikerema was, until 1971, the Vice-President of Joshua Nkomo’s Zimbabwe African People’s Union (Zapu).

In mid-1975 he visited Mozambique in a failed attempt to sell himself as the natural leader of the guerrillas. He met Samora Machel who asked if Robert Mugabe was a Smith agent.

Chikerema told me that Machel (who came to power in 1969 after the assassination in Dar es Salaam of the founder of Frelimo, Eduardo Mondlane) could not understand how closely watched “communist terrorists” (to use of the political jargon of Ian Smith’s security men) like Mugabe and Tekere, could so easily slip out of police and army- controlled border areas in Rhodesia into an enemy state.

But where was he?

At that time, Chikerema did not know that Mugabe and Tekere were being held under house arrest by the Mozambican authorities at a place called Vila Gouveia (Villa Katandica) in Mozambique.

Chikerema told me he was eventually able to find out the whereabouts of his uncle and let nationalist leaders know Mugabe was safe and sound but not free to act for the time being.

A relieved Mugabe wrote to his nephew on 29th July, 1975 (I have the original letter) thanking him for all his efforts. 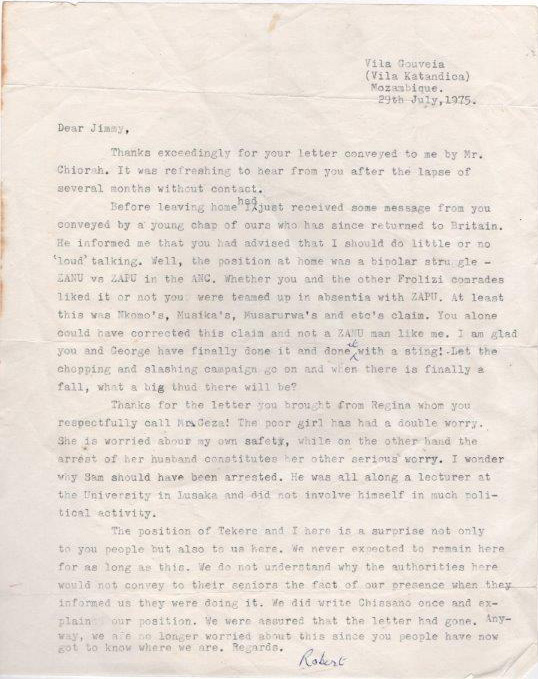 He wrote: ”The position of Tekere and I here is a surprise not only to you people but also to us here. We never expected to remain here for as long as this. We do not understand why the authorities here would not convey to their seniors the fact of our presence when they informed us they were doing it. We did write Chissano once and explained our position. We were assured that the letter had gone. Anyway, we are no longer worried about this since you people (James Chikerema and George Nyandoro) have got to know where we are.”

Chikerema and Nyandoro had broken from ZAPU to form the small Front for the Liberation of Zimbabwe (Frolizi) in 1971.

The formation of Frolizi angered Mugabe and he looked to the day when nationalists would be under the same umbrella. In the meantime, he wrote – “Let the slashing and the chopping campaign go on and when there is finally a fall, what a big thud there will be.”

Later, Mugabe and Tekere were released.

But Machel’s intense dislike of Mugabe never quite ended.

It was Samora Machel who ordered Mugabe to return to the Lancaster House Conference after he had walked out protesting loudly about a British plan to safeguard European land rights for ten years after Independence and for farms to be transferred from one to another on a willing seller, willing buyer basis.

Machel was sick and tired of the economic consequences of supporting squabbling and irreconcilable black leaders in Rhodesia.

Machel told Mugabe to fall in line with Lord Carrington’s demands or come and live at a small rather remote cottage at a place called Quelimane, Mozambique for the rest of his days.

Sadly, Tongogara died in a car accident on Boxing Day 1979 only months before the country’s first one-person-one vote elections.

Margaret Thatcher played an important role in the creation of Zimbabwe.

But without Machel’s strong (and threatening) words to Robert Mugabe almost four decades ago, Zimbabwe might be a different – perhaps even a more pleasant – place than it is today.