One of the main surprises that followed Robert Mugabe’s overwhelming election victory (57 of the 80 seats open to Africans) in March 1980 was Prime Minister Robert Mugabe’s decision to appoint the Oxfordhsire-born President of the a Rhodesia National Farmers’ Union, Denis Norman, as the country’s first Minister of Agriculture. 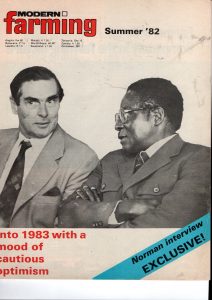 Garfield Todd (Prime Minister of Rhodesia between 1953-1958) wrote to some of his friends – “Rejoice with us. On Tuesday March 4, 1980 Zimbabwe emerged from persecution and war with clarity of decision which has taken the world by surprise. Our happiness is so great that it has almost banished the fear and anxiety under which we have lived for so many years . . .”

Later, Mugabe addressed the nation and his message to the country’s worried, worn-out European community of around 200,000 was one of reconciliation and hope.

And after much prodding from the colony’s last governor, Lord (Christopher) Soames, Mugabe appointed Denis Norman to his first post-independence cabinet.

Mugabe also brought his most important rival, Joshua Nkomo, in to government and there were four other ZAPU ministers and three junior ministers. To further re-assure whites that they had a future in the country, Mugabe appointed David Smith (formerly one of Ian Smith’s ministers) as Minister of Commerce.

The world applauded and within a matter of months, large sums of money flowed in like water, under the guidance (sadly, not for long) of the well-respected Finance Minister, Dr Bernard Chidzero.

If only South Africa would follow suit, chanted liberals around the world. Black power with white help.

This October, Weaver Press in Harare will publish a long –awaited and valuable book by a man who was close to the heartbeat of Zimbabwe politics during the early years of Independence.

And it is a part-record of some of the things that did go right and a sad reminder of the many, many thigs that went so pitifully wrong – the slaughter of tens of thousands of people in Matabeleland (Gukuruhundi): the collapse of organized agriculture: inflation that meant the local currency was abandoned in favour of the US $: the collapse of medical and educational facilities and the Mugabe/Emmerson Mnangagwa/Perence Shiri organized invasion of white-owned farms after 2000 which had such disastrous consequences.

Today, Mnangagwa says so many things went wrong after the invasions and they must be dealt with immediately and the man in charge of agriculture is Perence Shiri.

Denis Norman’s memoir will be published with the engaging title of The Odd Man In. The book follows the earlier publication by the excellent Weaver Press in Harare of Susan Woodhouse’s “Garfield Todd – The End of the Liberal Dream in Africa.”

Perhaps these publications show that whites who played such a valuable role in both Rhodesia and Zimbabwe are coming out of the closet ( as it were ) no longer of showing that white skins made magnificent contributions in black Africa.