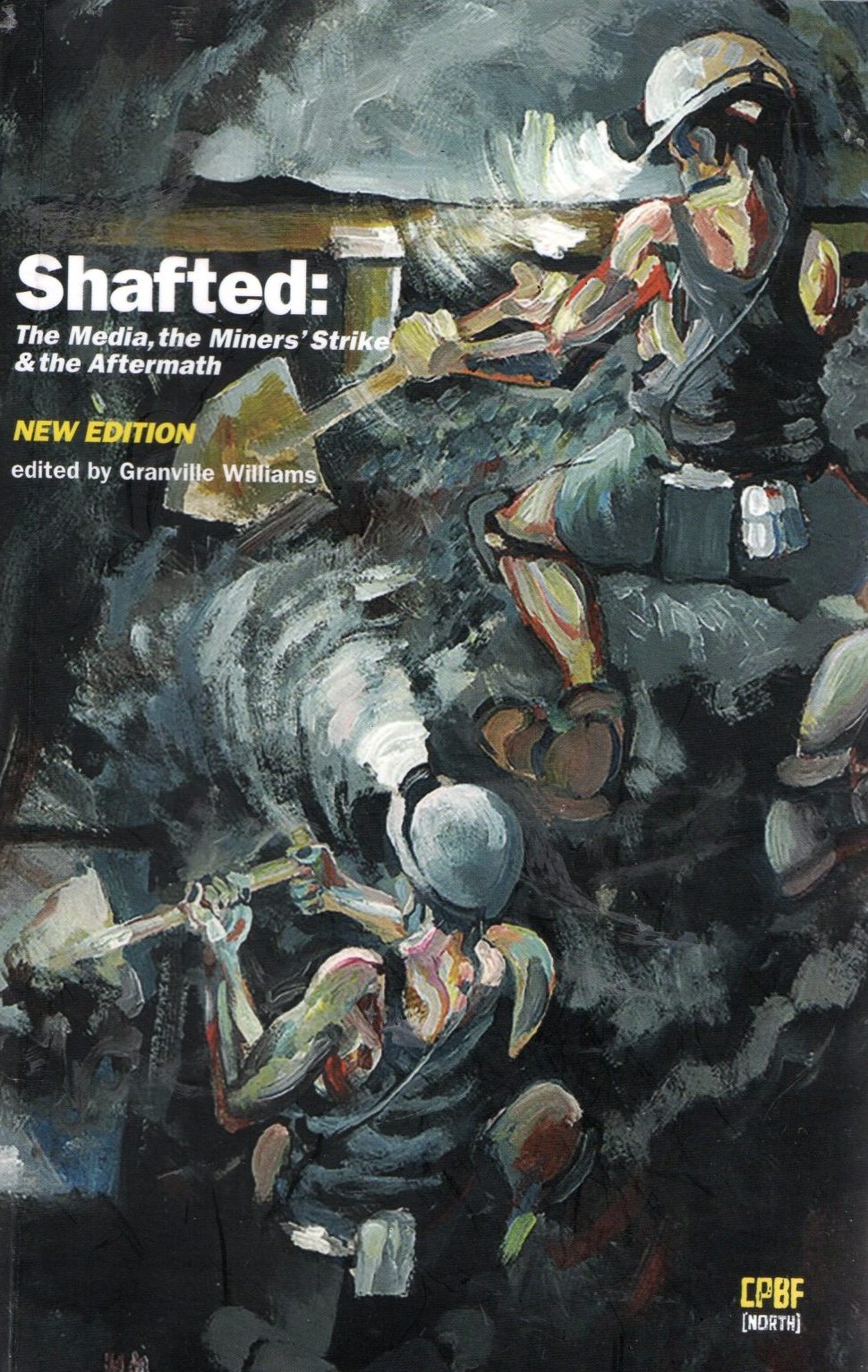 On June 18, the BBC’s Radio Four flagship programme ‘Today’ reminded us that it was the 204th anniversary of the Battle of Waterloo.

Sadly, for those not born in the 19th century, the state broadcaster forgot, or failed, to mention a more recent battle, the aftermath of which had such a devastating impact on the lives of hundreds of thousands of people who were once the backbone of the British coal industry.

It was the 35th anniversary of the battle at Orgreave which took place on a hot summer’s day in South Yorkshire in 1984.

The collective memory has faded but not where it hurts the most – in the hearts and minds of those who were there and the daughters and sons of families now bereft.

So three cheers for Granville Williams who has edited the second edition of his brilliant book Shafted, the up-dated version featuring a wealth of new material which enhances our collective understanding of the miners’ epic struggle in 1984-1985.

Many under the age of 50 will ask –What happened and why?

In a chapter entitled When the long arm of the law overreaches, the film- maker Morag Livingstone says:

“Books have been written and films made about the miners who once though they had a job for life in the coal industry, but a few months after Orgreave many found themselves facing a life sentence. While the case of riot against 13 of them men at Orgreave collapsed in 1985 and some compensation was paid for their troubles in 1991, the injustice lingers on. The feelings of communities who once trusted the police were summed up by one of the miners following his acquittal- ‘I can’t forgive the police for those things. I had respect for them before the strike, but none now.’ “

Call for a public inquiry into police brutality and the government’s support for their actions have been made time and time again.

The “tawdy reasons” for rejecting an inquiry were, explains Granville Williams in an article published in the communist newspaper Morning Star (October 27, 2018) “were that any review would be hampered by the passage of time, that some of those involved had died and that, in terms of accountability, most officers whose conduct might be examined were no longer employed by the police.”

He adds: “Indeed, the decision to block an inquiry galvanised the Orgreave Truth and Justice Campaign (OTJC) and it has sustained an incredible level of activity and a high public profile since then.”

So the struggle continues.

Basically, the miners wanted to stop lorry loads of coke from leaving a local pit for the steelworks. They thought that would help win their strike, protect pits throughout the UK and secure their jobs.

The police, with the full backing of the government of the day, were determined to hold them back and pictures of the fighting between the two sides shocked the nation and strengthened belief in mainly Conservative circles that the power of the NUJ had to be smashed once and for all.

The number of police involved was without precedence. The use of dogs, horses and riot gear in an industrial dispute was almost unheard of and some of their tactics were learned from the police in Northern Ireland.

During the subsequent court case, a police manual was uncovered which set out the Thatcher government’s plans to deal with pickets and protests long before the 1984 strike took place.

A BBC reporter wrote in 2015:”Police vans and Range Rovers were fitted with armour so they could withstand the stones being thrown by some of the crowd. The miners suspected the whole operation was being run under government control.”

It was, in short, the moment police strategy switched from defensive – protecting collieries, coking plants and working miners (branded by strikers as ‘ scabs’) – to offensive, actively breaking up crowds and making large numbers of arrests and at the end of the day, closing remaining pits and destroying in mining communities.

In the foreword to this well written, finely edited and timely book, Francis O’Grady, General Secretary of the TUC (Trade Union Council) declares – “It exposes how powerful forces conspired against the National Union of Miners (NUM) and the working-class communities is sought to defend.”

Much has changed since the first edition of Shafted.

Following the release of Cabinet papers, we are at long last in a position to understand the lengths to which the Thatcher government went to defeat the NUM and its members.

O’Grady writes: “The involvement of the intelligence services, police brutality, and the collusion of shadowy business groups – every instrument of state power was deployed to crush the miners as ‘the enemy within.’ “

And since the first edition was published, we’ve also seen the establishment of the Orgreave Truth and Justice Campaign which demands a public inquiry into what Granville Williams calls “the most violent assault by police during an industrial dispute.”

Thatcher’s biographer Charles Moore (a former editor of the Daily Telegraph and the journalist dubbed Lord Snooty by the satirical magazine Private Eye) records in volume one of the authorize biography (Not for Turning) how on taking office in 1979 she told one of her closest advisers Willie WhItelaw: “The last Conservative government (Edward Heath’s in 1974) was destroyed by the miners’ strike. We’ll have another and we’ll win.”

She prepared meticulously for the confrontation which came so soon after the Falklands War which turned her from a national pariah – arguably the most unpopular British prime minister of the 20th century – into Winston Churchill without the cigar.

This, the new version of Shafted, is divided into 18 quite short, well edited and easy-to-read sections written by a variety of authors who were closely involved in the strike.

Tony Garnett, the TV dramatist, writes about the way the media handled the news.

Ray Goodspeed, a founder member of Lesbians and Gays Support the Miners in 1984, tells the fascinating story about the way the community supported the miners.

There is also a fact-packed and moving chapter written by Caroline Poland, Debbie Matthews, Flis Callow and Marilyn Haddington called You can’t Kill the Spirit, Sheffield Women against Pit Closures.

It emphasises the chilling (for Thatcher) fact that the strike had nationwide trade union support.

The sub-title to this vital book, one that should be on the shelves of schools, colleges and public libraries, speaks about the Media and the Aftermath of the Strike.

The aftermath is now.

Says the film-maker, writer and photographer Morag Livingstone: ”When the strike was over (in March 1985) the government implemented the mass closure of the mines and in turn devastated many of the UKs industrial communities. What is worse is that the government planned the closures but had no plan to rebuild. They left communities without industry or good jobs. Communities that had worked to fuel the nation found their government turned against them.”

The editor of this magazine, Tony Sutton, visited South Shields in the north of England in the 1970s and saw a town with 75,000 people in high-paying jobs in shipbuilding and coal mining. When he returned from Canada in 2016 he was shocked by the way the town had deteriorated, saying: “The once bustling thoroughfare that furnished the dreams of an affluent society is now a nightmare of austerity. The businesses that remain are mainly charity outlets, betting shops and pound stores for cash-strapped customers, while those who cater for the wealthier have decamped to big-box citadels elsewhere.”

The media coverage of the strike and the public crucifixion of Arthur Scargill, the miners’ leader, needs greater examination and even more publicity.

Nicholas Jones, the former industrial correspondent for the BBC writes:”Never before in my experience had the popular press been so partisan for so long. Their demolition job on the character and reputation of Scargill was unparalleled in its unrelenting g ferocity.” And on most of the media: They were in effect the mouthpiece for the government and the NCB (National Coal Board). Their journalists- unlike a labour and industrial correspondent such as myself reporting for the NBBC – had a hotline to influential sources of information such as Tim Bell (Margaret Thatcher’s favourite PR person), Bernard Ingham (her press officer at Downing Street) and David Hart, who was an adviser to both Thatcher and the NCB chief executive Ian MacGregor who went on to assist working miners to fund legal actions against the NUM and then to form a rival union – The Union of Democratic Mineworkers.,

The book’s worth is well summed up by Frances O’Grady who writes -“Over three decades on, we are still living with the consequences of this unprecedented assault. With inequality rocketing and living standards stagnating, we have austerity for the many and untold riches for the few. But the campaign for justice goes on and the spirit of the miners lives on in our campaigns to end zero hours contracts, fight for decent jobs in places that need them, defend the right to strike and organize a new generation of workers. The power lies in our own hands.”

And a large part of that power is knowing what happened, why it happened and what can be learned from a confrontation that has put so many lives on hold. Hence, the value of this politically charged, most important book.