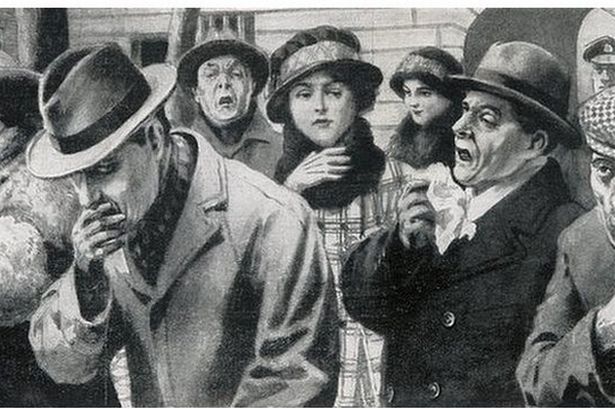 Superbugs threaten us with what David Cameron called "an unimaginable future"

The rise of antibiotic superbugs poses what the British Prime Minister David Cameron calls “an unthinkable future” where minor inflections could again kill millions of people. Tens of thousands are already dying of infections that have evolved resistance to common medical treatment. This is a shocking but timely reminder of a pandemic known as the Spanish ‘flu that killed between 30 to 50 million at the end of the First World War, writes TREVOR GRUNDY

The pandemic that swept across the globe at the end of the First World War (1914-1918) has been described by various historians as the greatest medical holocaust in history – up there and alongside AIDS, tuberculosis, smallpox, malaria, cholera and typhus.

Some believe it might have killed more people that the Black Death in the European Middle Ages, when the rat and flea carried bubonic plague wiped out a third of the European population.

It is common to focus on the impact influenza had on Western countries in 1918 where systematic information on mortality has been available for a number of years.

But the highest death rates were neither in America or Europe. They were in Asia and Africa – not surprising because the majority of Westerners had access to reasonably decent food and shelter which was not the case in countries such as India, China or most places in Africa.

The Dutch researcher Jan –Bart Gerald told a gathering of academics in 2007 that “Spanish influenza”  originated not in Spain but in France at a military camp where over 100,000 men lived beside pigs and poultry.

Others say it started in China and then spread to Kansas USA, crossing over into Europe and then Africa and other parts of the world by German and Allied soldiers locked in one of the most appalling slaughters in history.

In March 1918, the deadly virus struck at military camps in America, where soldiers waited shipment to the war in Europe. In the course of three months, over 43,000 soldiers succumbed to the disease.

One of the most striking of the complications was hemorrhage from mucous membranes, especially from the nose, stomach and intestine. Bleeding from the ears and skin also occurred but the majority of deaths were from bacterial pneumonia. The disease killed 20 percent of those infected, as opposed to the usual ‘flu epidemic of 0.5 percent.

The epidemic did not kick off in Spain but the name stuck – Spanish ‘flu.

The names of millions of the war dead are remembered on stones and walls around the world. There’s no clear division between those who died in combat and those who died of influenza at the war’s end in November 1918.

Like so much else, the devastating impact of the epidemic was played down by the victorious Allies and within a few years, the public’s memory of the Spanish ‘flu fell away and historians call it “the forgotten epidemic.”

Forgotten? Well, almost. It was seen as an extension of one of the many tragedies of the war.

“On the battlefield of Northern France,” Gerald explains, ”troops on either side of the line, sometimes 500 meters apart, were infected by airborne diseases. In the prisoner of war camps and gas ridden trenches and dugouts or horrendous war the disease spread like wildfire and lay the seeds for further out breaks further afield.”

Hundreds of thousands of men were shipped to Africa where a fierce war between the Germans and British (backed by South Africans and Rhodesians) raged in East Africa.

In 1998, Professor Howard Phillips in the Department of History at the University of Cape Town and Professor David Killingray, organized a conference entitled “Refection’s on the Spanish Flu Pandemic after 80 years: Causes, Course and Consequences.” Little known studies were examined including Terence Ranger’s “The Influenza Pandemic in Southern Rhodesia: A Crisis of Comprehension.”

There have been hundreds of learned articles about the impact influenza made on America, Britain, and Europe – relatively few on the devastation it caused in Africa.

In the north-eastern districts of Northern Rhodesia (Zambia) the pandemic arrived in the context of war and famine.

Ian Phimister tells us in “Wangi Kolia – Coal, Capital and Labour in Colonial Zimbabwe 1894-1954 “( Baobab Books Harare 1994) that the first case of Spanish ‘flu in neighbouring Southern Rhodesia (Zimbabwe) came in October 1918, one month before the war’s end.

He writes: ”From there the epidemic spread swiftly to Gwelo (Gweru), Que Que (Kwekwe) and Salisbury ( Harare) before engulfing other towns and districts the line of rail.

Wankie’s turn came on October 14, 1918 ‘and within the space of a few days nearly two thousand natives were prostrated. The influenza pandemic struck the colliery with explosive force. Like most other large Southern Rhodesian mines, Wankie’s overcrowded, filthy compound provided optimum conditions for the rapid spread of the disease. Underground labourers, subject to variations in temperature as they left hot and confined working conditions below ground for the surface where there were no change houses, to suffer most from the pandemic. Hundreds of miners drew the appropriate conclusion and fled to the compound into the surrounding countryside. Some undoubtedly carried inflection into outlying villages but many more unquestionably saved their own lives by escaping from the colliery. By 24 October, an estimated 100 black workers had died and by the end of the month the total number of dead had more than doubled. One white miner died in the same period. For nearly two weeks Wankie was at a complete standstill.”

Francis L. Coleman records in The Northern Rhodesian Copper belt 1899-1962 (Manchester University Press, 1971) that the price of copper rose from £61 to £170 a ton by the end of 1916 but it was Katanga, in neighboring Congo (Zaire) that prospered the most because of the drop in production in Zambia. Just a taste of what God was bringing on – Judgment Day. The colonial authorities out her and her followers into prison.

The pandemic spread, fast as a bullet and against the fear of an invisible foe there is no heroic combat.

Lawrence Vambe MBE is 97. His mother, Agnes, died not long after his birth in March 1917. His father was shattered and unable to cope with family life. As a result, Lawrence and his siblings were brought up by Irish nuns at the famous Roman Catholic Mission Station at Chishawasha outside the then Salisbury. “Without those dedicated nuns, I would never have survived,” he told me from his home in North London. Spanish flu swept Southern Rhodesia (Zimbabwe) and I wonder how many young Zimbabweans understand what it did to the people of my country after the terrible world war.” Vambe went on to become one of Southern Rhodesia’s best known and most influential journalists and author of two excellent books “An Ill-fated People” (William Heinemann, 1972 and “From Rhodesia to Zimbabwe” (William Heinemann, 1976)

In South Africa, the authorities reacted by passing more segregation legislation – the Native Urban Areas Act – to separate the races. Although in some hospitals white nurses were told to treat blacks because the authorities were so frightened it would spread even further without treatment.

In 1902-1935, Jock McCulloch tells us in his book “Black Peril, White Virtue: Sexual Crime in Southern Rhodesia” that “natives” were forbidden from travelling on trains and chiefs were instructed to keep their people confined to their villages. The state requisioned cattle and petrol supplies. Almost ten times as many Europeans died from Spanish ‘flu as were killed in the first Chimurenga (war in the Shona language) – the African uprisings against European rule in the late 1890s.

Africans started to believe that the whiteman’s war in Europe had caused the epidemic which turned customary life upside down in both of the Rhodesias (Zambia and Zimbabwe). So many women were sick. Men had to grind corn and prepare meals. Diets changed. Cassava – a relatively easy crop to grow requiring less labour than maize – became suddenly popular.

Melvin E. Page writing in “The Chiwaya War: Malawians and the First World War” (Boulder Press Colorado, 2000) tells us that the connection between the war and the pandemic of influenza was not only immediate but causal. A common expression was that ‘war air’ had brought the new and devastating disease into Africa because of white men fighting one another thousands of miles away in Europe.

A young woman in the Eastern Cape, Nontetha Nkwenkwe, was overcome by Spanish’ flu but she recovered and said she had received divine messages. She began preaching and prophesizing that influenza was a divine warning of things to come – a taste of what God was bringing on – Judgment Day.

The colonial authorities out her and her followers into prison.

Against the background of an estimated 30-50 million deaths in just over one year, it hardly matters where the epidemic started or who was responsible.

It was no respected of race or ethnic group.

All human beings were fair game, much as they are now if David Cameron is right -that super bugs resistant to antibiotics could return us to the European Dark Ages, a world so chillingly described by the American historian Barabra Tuchman in “The Distant Mirror” (Macmillan, 1979)

A report in “The Times” (July 2, 2014) said that a team of economists will lead an international group of experts aiming to spur on a new generation of antibiotics. Jim O’Neill, a former chief economist at Goldman Sachs has been asked to consider how governments would be able to afford to pay pharmaceutical companies to produce the right drugs which could overcome future epidemics and how poorer countries (many of them in Africa) can be encouraged to improve the control of existing antibiotics which are often sold over the counter in shops.

Jeremy Farra, director of the Wellcome Trust, says that drug-resistant bacteria, viruses and parasites are driving a global health crisis. “This,” he says,” threatens not only our ability to treat deadly infections, but almost every aspect of modern medicine from cancer treatment to caesarean sections, therapies that save thousands of lives every day rely on antibiotics that could soon be lost.”

“But only five new types of antibiotics have been introduced since the 1960s and the supply of newly developed drugs is dwindling as companies see little profit in working on treatments designed only to be used as a last resort,” said The Times.

And, usual, it will be the poor, the homeless, the already ill and hungry that will bear the brunt of the next medical cataclysm.