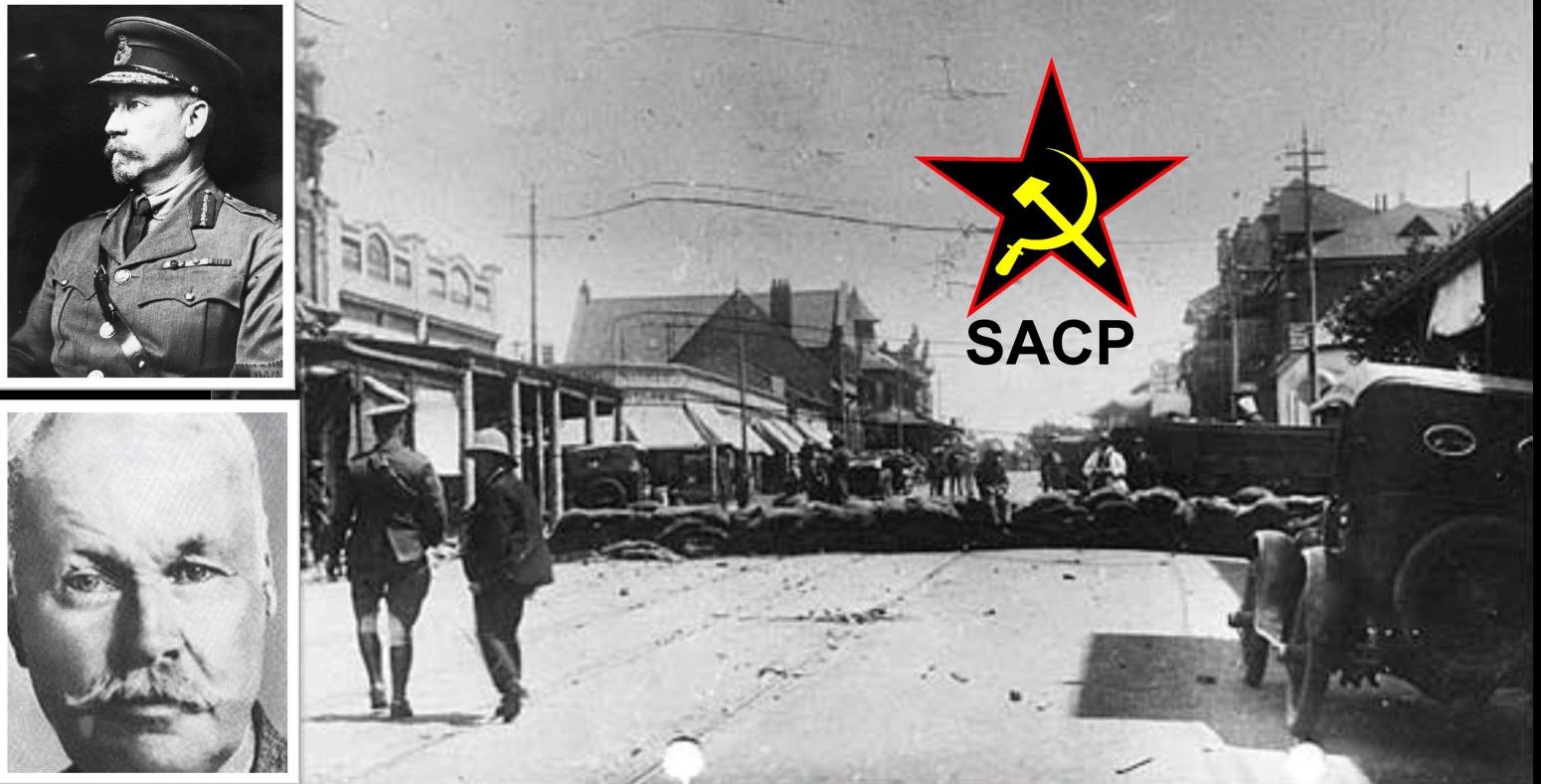 1922 was quite a year. In India, Gandhi was sentenced to six years in prison for sedition. In Egypt,  the child Pharaoh Tutankhamun saw daylight for the first time in a few thousand years and 1922 was  also the year the USSR was born.   Mussolini and 24,000 of his  followers marched on Rome and gave the world fascism and in an all-white referendum, Southern Rhodesians rejected union with South Africa. Not to be outdone, South Africa had the Rand Revolt.

The 1922 Rand Revolt has its origin in events that took place thousands of miles away from South Africa in the years that followed the end of the First World War in 1918.

In his book South Africa – A Modern History (Macmillan, 1991, 620 pp) the historian T.R.H. Davenport tells us that at the beginning of 1920 and the end of 1921 deflationary policies in Britain, the USA and other countries including South Africa restored the relative value of their currencies at the expense of gold.

The South African mines found it difficult to face the fall of the gold price because of a marked increase in costs since 1914.

In May 1920 some twenty-one mines, constituting about half of the Rand gold industry, employing 10,000 whites and over 80,000 Africans, were in danger of becoming unprofitable.

The post -war situation was made worse because during the world war, wages for white miners rose in step with the cost of living, while wages for blacks remained static.

In February 1920, a strike broke out after the arrest of two black miners who had the temerity to agitate for a pay increase. 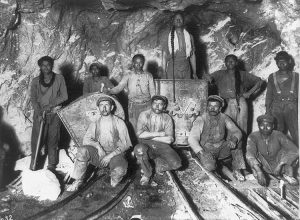 One of the most provocative slogans during the Rand Revolt called on the workers of the world to unite for a White South Africa. Problem with that was the mine owners they were fighting were also white.

Twenty-one of the country’s thirty five mines and around 71,000 Africans were involved.

Says Davenport: ‘It was led mainly by Shangaan and Pedi elements, a number of whom lived outside the compounds and thus had political contact. But despite its widespread nature, and the fact that it was the climax of several years’ unrest, the strike was quickly put down.’

It is important to remember that this was just three years after the Russian Revolution (1917).

In South Africa and other parts of the world, long- ignored workers and a growing number of intellectuals believed they woudn’t have to wait long for Biblical and Marxian prophecies about the first coming last and the last coming first to come true.

Communists in South Africa – most of them English-speaking expatriates – were quick to make political capital of the worsening situation throughout the mining industry  and tell indigenous mineworkers how appalling badly they were being  treated by the country’s swimming in wealth Randlords and ’Hoggenheimer’ mining house  owners.

Faced with economic collapse, the mining houses realised that the annual wage bill was one area in which costs could be cut to meet rising expenditure.  The grey area of semi-skilled employment went under the microscope for the first time.

It soon became obvious that there were plenty of blacks with sufficient ‘know-how’ to do jobs reserved for whites. Mining house bosses looked twice at an agreement they’d made with white miners in 1918, an agreement not to change things and keep whites earning wages well above those of their black counterparts. 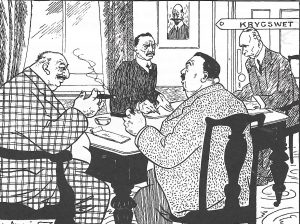 D.C. Boonzaier was one of the most brilliant cartoonists South Africa has had and would have felt quite at home in the Third Reich. His cartoons were inspired by a fierce hatred of the greed of the mining magnates. He often depicted the bewildered urban poor whites as scorned and exploited by  unscrupulous capitalists, portrayed by a repulsive’ Hoggenheimer’ figure. Boonzaier and other cartoonists denied ‘Hoggnheimer’ was Jewish but you don’t have to be a rocket scientist  to get the message.

But in November 1921, in face of the growing economic crisis, the Chamber of Mines gave notice of its intention to abandon the status quo agreement by eliminating a colour bar in any semi-skilled work. As soon as the Chamber of Mines gave notice that it would be abandoning the agreement and would be replacing 2,000 semi-skilled white men with cheap black labour, the white miners reacted.

Their jobs and pay packets were threatened by the removal of the colour bar. Sporadic strikes were launched at the end of 1921 but these did not become widespread until the end of that year.

A report about the Rand Revolt on South African History Online says that because of the large number of mines and men living in and around Fordsburg, Johannesburg, trade unions had become active in this area.

This set the scene for the revolt in Fordsburg.

At this time some trade union members were attracted by the spirit of socialism and others became communists, who referred to themselves as ‘Reds.’ 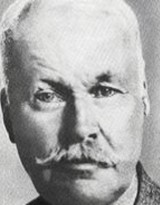 In the meantime, a group of revolutionaries organised commandos under the leadership of people who called themselves the ‘Federation of Labour.’

Men who saw themselves as red hot communists now shared a similar goal with men who went on to lay the paving stones that led to the victory of Dr Malan and his National Party in 1948 and the arrival of ‘official’ apartheid.

The New Year (1922) saw a strike on the collieries of the Transvaal. Strikes soon spread to the gold mines of the Reef. By January 10, stoppage of work in mining and allied trades was complete.

In February 1922, the protracted negotiations with the South African Industrial Federation broke down when men under the Action Group umbrella set up barricades.

The Star newspaper described how mob violence spread alarmingly with bands of white men shooting and bludgeoning unoffending Africans and men of mixed race (coloureds) as through they were on a rat hunt.

A general strike was proclaimed on Monday March 6, 1922. Two days later, the strike turned into open revolution which was a communist/Afrikaner miners’ bid to capture Johannesburg.

On March 8, led by semi-skilled Afrikaner miners, white workers attempted to take over the Johannesburg post office and the power station but they met with strong resistance from the police (also mainly Afrikaners).

The SA On Line report says: ‘To quell this the Union Defence Force was called out, as well as the aircraft of the fledgling SAAF and the artillery. By this time, Brakpan was already in the hands of the rebels and pitched battles were raging between the strikers and the police for the control of Benoni and Springs.

Aeroplanes strafed rebels and bombed the Workers’ Hall at Benoni. Rebels besieged the Brakpan and Benoni police garrisons. At Brixton, 1,500 rebels surrounded 183 policemen and besieged them for 48 hours. From the air, pilots observed the plight of the beleaguered Brixton policemen. Swooping over them, they dropped supplies, and then returned to bomb the rebels. Martial law was proclaimed and burgher commandos were called up from the surrounding districts and Prime Minister General Jan Smuts was blamed for letting the situation get so out of hand. In February he had sided with the mine owners and went on to lose the 1924 general election, partly because of that.

On Sunday March 12, military forces and citizens attacked the rebels holding out and took 2,200 prisoners.

On March 15, the artillery bombarded the strikers’ stronghold at Fordsburg Square and in the afternoon, it fell to the government. Before committing suicide, the two Communist leaders Fisher and Spendiff, left a joint note, ’We died for what we believe in – The Cause.’ 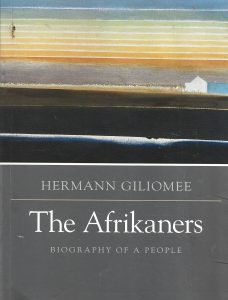 In  ‘The Afrikaners – Biography of a People (Hurst & Company, London, 2003, pp 698) Hermann Giliomee, Professor of History at the University of Stellenbosch, says that not all the radical non-Afrikaners workers were dogmatic communists.

“They tended to see the strike as a fight between free white labour and black slave labour. They believed that victory alone could prevent white ‘race suicide’.

One of the best remembered symbols of the strike was the banner declaring ‘Workers of the world unite and fight for a white South Africa.’

But vague calls for a white South Africa were not popular among a large section of the strikers.

The capitalist mine-owners and shareholders were also white. 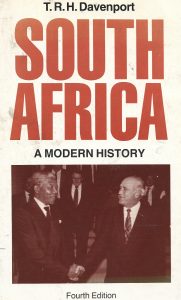 How the centenary of the Rand Revolt will be marked in South Africa (March 2022) remains to be seen.

Maybe it will be ignored.

It was a calamity that inflicted suffering on every section of the South African community. It cost many lives (at least 200) and more than 1,000 people were injured.

Fifteen thousand men were put out of work and gold production slumped. In the aftermath, some of the rebels were deported and a few were executed for deeds that amounted to murder.

As mentioned, Smuts was widely criticised for his severe handling of the revolt. He lost support and was defeated in the 1924 general election and this gave Hertzog’s National Party and the Labour Party (supported by urban white Afrikaner workers) an opportunity to form a pact.

And at the end of revolt, white miners were forced to accept the mine owners’ terms unconditionally. Gold production increased because of the use of a higher proportion of African labour, lower wages for whites, and new labour-saving devices which came into operation. 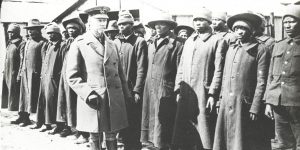 White criticism about the way Smuts handled the Rand Revolt cost him dearly at the 1924 general election.

So did the Rand Revolt do anything to seriously damage apartheid?

The first was the Industrial Conciliation Act of 1925, the second was the Wage Act and the third was the Mines and Works Amendment Act of 1926 which firmly established the principle of the colour bar in certain mining jobs.

This month, some South Africans will be looking back and recalling those terrible days on the Rand in 1922. Others are only too happy to forget it ever happened.

But can you imagine what might have happened had indigenous Communists from all races  and Afrikaners from all sections  of that strange much deformed Christian society  joined hands and  embarked on a class,rather than race, war in South Africa?

Best not to think about it, eh?

What Ernest Renan said in the 19th century, the age of nation-building in Europe, springs to mind, ‘Being a nation is to agree about what to forget.’

This article first appeared in the March 2022 edition of the USA/Canada online magazine, ColdType