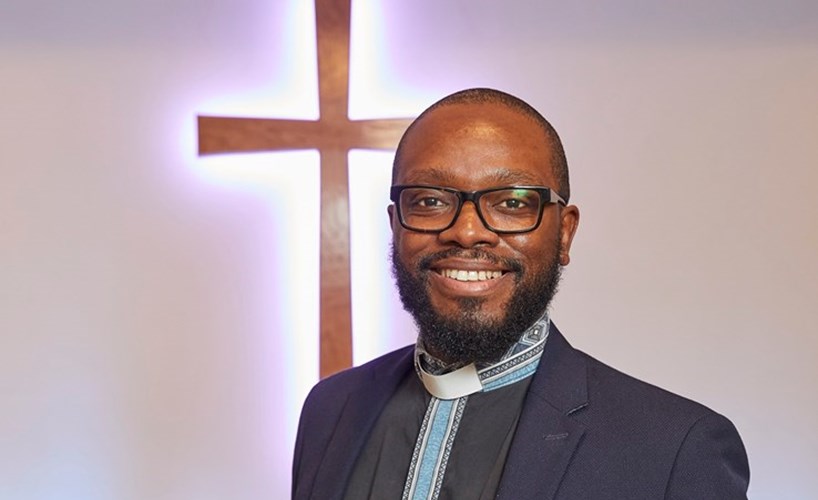 DRC-born Canon Lusa Nsenga-Ngoy will be consecrated as the new Bishop of Willesden at St Paul’s Cathedral in London on January 25, 2022

CANTERBURY, ENGLAND  – – – At a time when most politicians  look the other way when rubber dinghies carrying terrified asylum seekers sink in the ice-cold waters of the Channel, the Revd Canon Lusa Nsenga-Ngoy could prove to be a breath of fresh air blowing through England’s established church that is so hopelessly out of touch with not only asylum seekers but most of the young and older people in Britain’s fast-growing  ethnic communities. 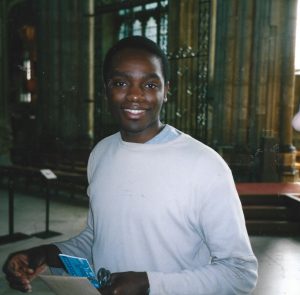 Lusa in 2003 at the Eglise Protestante Francais in Canterbury (Picture: Trevor Grundy)

He is a man acquainted with both exile and sorrow and will be campaigning, not only against racism but also the widespread apathy about the plight of those seeking a new life in one of the world’s richest countries – this one – when he is consecrated as the new Bishop of Willesden at a ceremony in St Paul’s Cathedral in London on August 25 next year.

He succeeds Rt Revd Pete Broadbent who served the diocese as bishop for over twenty years. Lusa was ordained in 2008 and served as an assistant curate in the Diocese of Canterbury before becoming Vicar of St Aidan, Gravesend in 2012. In 2017, he was appointed Black and Ethnic Minority (BAME) Mission and Ministry Enabler in the Diocese of Leicester.

The official announcement was made at Twyford Church of England High School where some of the students helped in the selection process for a new bishop.

Lusa told  ‘Church Times’ that he was ‘eager to experience the wealth of diversity in heritage and culture that make up the communities of west London. ‘I look forward to strengthening existing bonds across churches and the wider community, as we tackle together some of the big issues facing us all.’

Born in 1977 into the Christian community of the war-scarred Democratic Republic of Congo (DRC), Lusa is a member of the Church of England’s largely defunct Anti-Racism Taskforce.

After the killing of George Floyd last year, he begged fellow Christians to see and learn from ‘the fire that has been burning for over 400 years, consuming generations or black lives. Also, to  denounce and confront ‘the debilitating forces of white supremacy.’

I met the Church of England’s latest and possibly most interesting senior member first in 2003 when he was pastor of a little known but historic French Protestant Church in the heart of Canterbury. 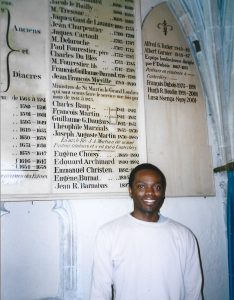 Lusa, the youngest pastor to head up this historic church in Canterbury (Picture: Trevor Grundy)

He was fairly fresh to England and was the youngest man ever to lead the Eglise Protestant Francaise, a small jewel of a church in the crypt at the Black Prince Chantry in Canterbury Cathedral, the mother church of the worldwide Anglican Communion.

In 2000, he took a degree as Licencie  at the  Faculty of Protestant Theology at Brussels University. He is fluent not only in French and English but in several African languages.

His speciality is the theology of exile and told me in an interview:  The Old Testament is full of the most wonderful stories about men and women who lived most of their lives somewhere other than home.’

The Eglise Protestante Francaise de Cantorbery was founded in the 16th century when French speaking Walloons and Dutch-speaking Flemings came to England, all victims of anti-Protestant campaigns in different parts of Roman Catholic Europe.

In 1575, the Strangers (as the incomers were called) were allowed to gather for worship at the church of St Alphege, opposite the archbishop’s palace but within a year it became too small and they were granted the use of the western crypt of the cathedral. 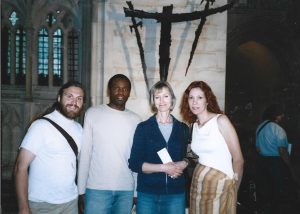 Lusa with visitors from America and other parts of Kent at the scene of the martyrdom of Thomas Becket (Picture: Trevor Grundy)

The story how they came to England, how they lived and what happened to them is told in a highly informative brochure published by the French church in Canterbury.

Before his ordination at the hands of Dr Rowan Williams, Lusa Nsenga-Ngoy won the hearts of Christians and member of other faiths throughout Kent and different parts of southern England.

His next stop is Willesden. There are few who doubt his ability to do the same again when he gets going  there next year with his Dutch-born wife Mirjam  and their three young children.