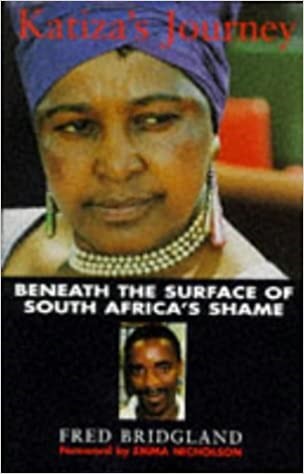 Katiza Cebekhulu left his home in the township of Mpumalanga in  Zululand, South Africa, in 1988 go get to Johannesburg. He was escaping a life of poverty, brutality and petty crime. But in Johannesburg, far from finding salvation, he entered another world and his introduction to it came from the late (and some still say great) Winnie Mandela, a moving story told in a book called Katiza’s Journey by journalist Fred Bridgland. The following is this well-respected author’s letter to the chief executive of Shelter which helps the homeless and the hopeless in a  a country increasingly indifferent to the plight of refugees.

My name is Fred Bridgland. I am an author and former foreign correspondent for Reuters, the Sunday Telegraph and The Scotsman.

I’m writing to seek some guidance about an offender who has had a sentence against him eased, but who now finds himself homeless and without a right to benefits or a right to work. He is living on the street without any means or right to sustenance. It is a shocking situation.

The offender’s name is Katiza Cebekhulu, of South African origin, who is appealing a deportation order by Priti Patel after living in this country for 25 years.

While Katiza’s appeal is being considered by the Home Office, he is not entitled to any benefits and is not allowed to seek paid employment. He has fallen through every crack in the bureaucratic system. His “home” is a park bench in Portsmouth without any income.

It’s a Kafka-esque situation, and I’m writing to ask whether Shelter can offer any advice or help on how to help this man.

The background is this. Mr Cebekhulu, who has been diagnosed with PTSD, was briefly famous/infamous for accusing Mrs Winnie Mandela of murdering a 14-year-old boy, Stompie Moeketsi, in her own home in Soweto, the giant black township on the outskirts of Johannesburg, in December 1988. Cebekhulu was a member of Mrs Mandela’s notorious vigilante squad, the so-called Mandela United Football Team.

To prevent him giving evidence in Mrs Mandela’s subsequent trial for abducting and assaulting Moeketsi, Cebekhulu was abducted by an African National Congress “hit squad” and taken to Zambia, where the then President Kenneth Kaunda imprisoned him without charge or trial.

With the help of a British MP, the then Emma Nicholson (now Baroness Nicholson of Winterbourne), I secured Cebekhulu’s release from prison and his right to live in the UK from 1997 onwards, but without the full right to asylum.

I subsequently wrote two books on Cebekhulu and Mrs Mandela  and he has now written his own story which will be published later this year.

Cebekhulu grew up uneducated. He was born in a war-torn South African township (Mpumalanga, near Durban), where in the 1980s and 1990s there was constant extremely violent conflict between the African National Congress and the Zulu nationalist Inkatha Freedom Party.

His time in the UK has been a roller-coaster ride. Recently he was arrested and remanded after he threatened with a knife two youths who assaulted him in the Portsmouth hostel for the homeless where he had a room.

He appeared before Judge Louise Harvey at Portsmouth Courts of Justice on 12 April this year. Judge Harvey concluded it would be “unjust” to send him to prison for his offence. She instead ordered him to serve 150 hours of community service and wear an electronic tag.

Unfortunately, he lost his accommodation when he was in prison on remand. Since then neither the local council nor the probation service nor the court nor any local charities have been able to find him accommodation: he has fallen through every crack in the bureaucracy. Without welfare benefits or the right to seek employment, Cebekhulu is destitute in the most extreme sense of the word.

Mr Cebekhulu returned on 31 May to Portsmouth Courts of Justice, where a different judge cancelled his community service order and instructed that his electronic ankle tag be removed because he had no fixed abode. He was instead ordered to report to his probation officer twice a week.

Mr Cebekhulu walked from court effectively a “free man,” but with still no accommodation or income from work or benefits. The local council has said it will only be able to provide accommodation once the result of his deportation appeal is known, and that might take months

This is an appalling situation, and I wonder whether (a) it is a situation Shelter has previously encountered, and (b) whether there is anything you can do to help Mr Cebekhulu or advise me on what course to take?

I look forward to hearing from you or talking to you,