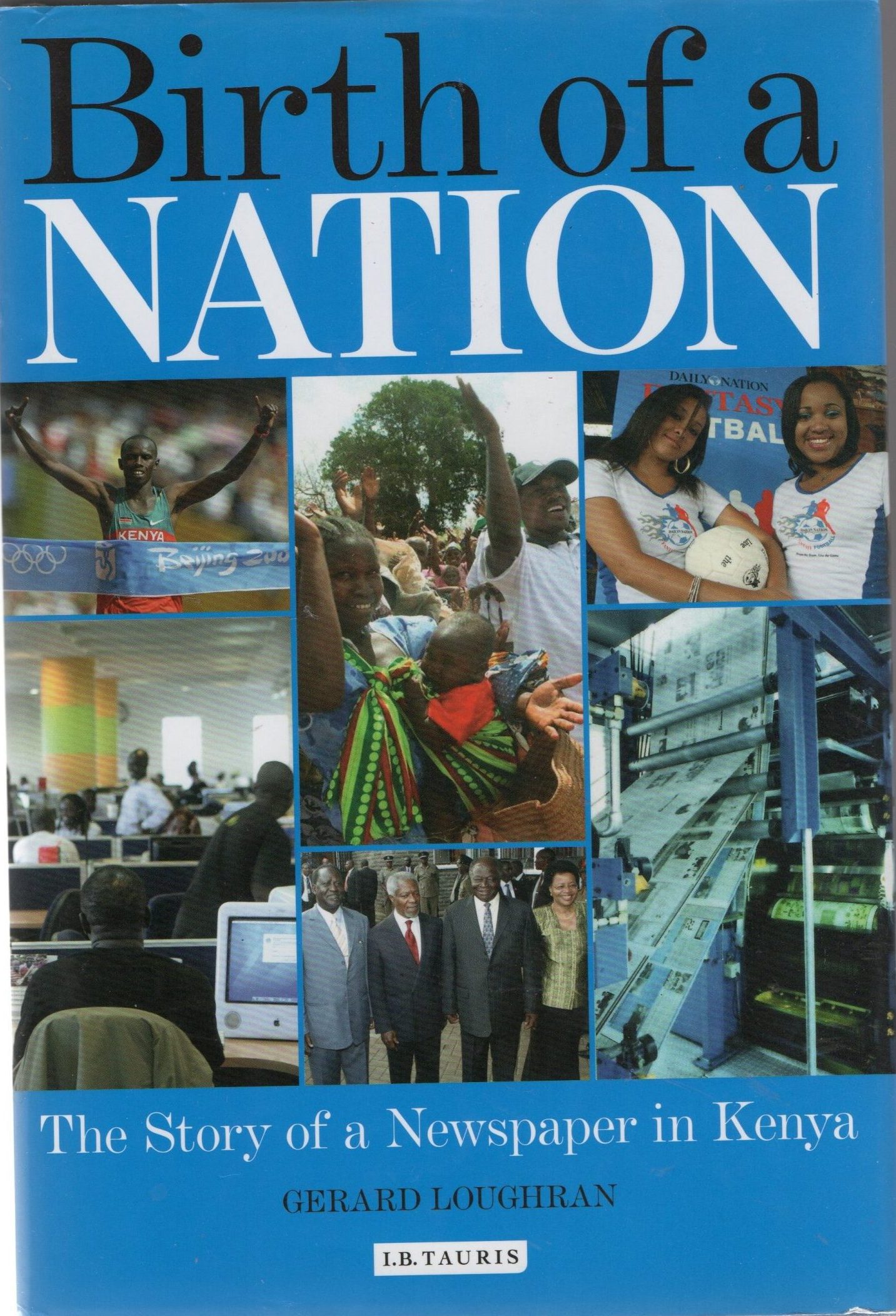 One of Kenya’s best known journalists, Cyprian Fernandes, is putting the finishing touches to a private circulation book that tells part of the story of one of Africa’s great newspapers, The Nation, on the eve of its 60th birthday next month.

The book will contain articles written by some of Kenya’s most famous writers and photographers and is a follow-up to Gerard Loughran’s “The Birth of a Nation – The Story of a Newspaper in Kenya” (I.B Tauris, 2010) which appeared on the 50th anniversary of the Kenyan tabloid.

The Nation is owned by the Aga Khan, head of the Ismaili Community.

The daily was founded in March 1960 and it started small.

But by October that year it went offset, the first daily in the world to that outside of America, and it soon attracted some adventurous and highly competent expatriate journalist and management executives from different parts of the world.

It was not until 1964 – three years after Independence – that The Nation had its first black editor, the legendary Hilary Ng’weno who was followed by George Githi, Boaz Omori and Joe Rodrigues.

The baton is now in the hands of Cyprian Fernandes who long ago left Kenya for Australia where he has made a name for himself as a journalist and author.

He left Kenya fast and for a very good reason.

After publishing a critical article about how rich the Kenyatta family had become since Independence, Cyprian’s wife, Rufina, received an envelope with a bullet in it, a bullet and a small card with her husband’s name on it.

The Aga Khan was still a student at Harvard University when he decided that an independent newspaper would be a crucial contribution in East Africa’s peaceful transition to democracy. He turned to a former Fleet Street editor Michael Curtis, to get things moving at a time when colonialism was coming to an end and nationalist movements demanding one person/ one vote were everywhere.

The Nation supported black nationalists at a time when the commanding heights of Kenya’s economy were completely under the control of either settler Europeans or Asians.

But despite all the support it gave to Jomo Kenyatta and his ruling party the Kenya Africa National Union (KANU) love between the authorities and The Nation was short-lived.

But it survived years of arrests by a series of governments who equated constructive criticism with sinister sabotage.

A decade ago Gerard  Loughran’s book earned a place on the library shelves of colleges specializing in media studies around the world.

Almost every journalist who ever worked in Kenya has a copy of that book on his or her bookshelf.

Cyprian Fernandes hopes for a similar success and details about how to get your hands and eyes on to this new book will be shown on this website in a few weeks from now.

Various people who worked at The Nation in Nairobi were asked to contribute to the book. This is by me, Trevor Grundy which partly tells the story about a young man on the run from fascism in  Britain who finds a new place to live and work  – Africa.

How did I get there?

I left England in April 1966 after working for the Egyptian Government-owned Middle East News Agency (MENA) for two and a half years, first as a tea-maker and then as a telex operator for my Egyptian boss who trained me as a reporter appointing me towards the end of my time with that little known in UK agency as his House of Commons correspondent.

I went to Africa because I was on the run from the Mosley Movement, having been brought up by parents who were fascist fanatics.

Life in Zambia was wonderful.

Because of my fascist childhood, I was pleased when people mistook me for a left-winger or (even better still) a communist.

I was probably the worst sub-editor Richard Hall, Editor-in-Chief of the Times of Zambia ever recruited having never worked on a news-paper in my life. I survived but only just. Instead of firing me, he sent me off to Livingstone where I edited the smallest least profitable or influential weekly in the world, The Livingstone Mail.

In August 1968, I flew with a teenage wife, Lori, who I married in Ndola, to Dar es Salaam after signing a two-year contract in London with The Standard newspaper, then owned by Lonrho.

It was one of the happiest times of my life.A new world, fresh thoughts, new people, different ways of seeing the world – and above all, a million miles away from Oswald Mosley. But where rainbows end, don’t go looking for pots of gold.

In December 1969, President Julius Nyerere nationalised the English media and appointed himself editor-in-chief of The Standard and its sister Sunday paper.

All the best journalists left at the end of their contracts.

For a variety of reasons, I renewed and was there until Nyerere decided to place all key position in the hands of black Tanzanians.

Frene Ginwala and her recruits from London were drop-kicked out of Tanzania.

Her attempt to give two tiny papers in Africa a Marxist /Leninist voice was a total failure and it didn’t take long after her departure for the new editor to turn them into sponges and mouthpieces for the ruling political party, TANU.

In Nairobi, I was offered two jobs – one with the East African Standardedited by Kenneth Bolton.

The other as Features Editor at The Nation, edited by Joe Rodrigues and owned by the Aga Khan who lived in France.

I found it hard to settle in (“capitalist”) Kenya after such a long time being indoctrinated in (“socialist”) Tanzania.

How easy it is to re-train fanatics.

One set of extreme beliefs in ex-change for another.

I remember prattling on to Kenyan whites about Franz Fanon, Che Guevara and Chairman Mao.

But at The Nation, I met several people I really respected as writers, in-cluding my former Chief Sub-Editor John Gardner, Barbara Kimenye, Fibi Munene, Jim Glencross, Joe Khadi and a man who I have stayed in contact with over the decades, Cyprian Fernandes.  The man we all liked so much and called “Skip” tells the story of why he and I left The Nation very well. I will not repeat his understanding about what happened in George Githii’s office one day after I decided to publish Skip’s excellent analysis of the political scene in Canada.

But I will add the following:In August 1972, Idi Amin’s appalling campaign against Asians in Uganda started.

He gave them 90 days to get out.  Amin was adored by so many black Kenyans and not only blacks.

I remember Barbara Kimenye telling me, after she met the Ugandan dictator, what a wonderful man he was with “such long artistic fingers.”

I wanted to say – artistic fingers when not around the necks of terrified Asians but I didn’t.

Then maybe she was pulling my “socialist” leg.

What I really needed in those days was for someone to pull both my legs out of the San Chique, The Nation’s over-the –road drinking den.

During a visit to Nairobi by the Aga Khan’s right-hand man, Michael Curtis, I asked for an interview and told him that there was no money for the features department so the paper relied on agencies from out-side Africa to tell readers what was going on inside Africa.

He shut me up and told me to get on with my job and not complain.

He also told me there would be no more critical features in the paper about Idi Amin until all the Aga Khan’s Ismaili followers were out of Uganda and settled in other parts of the world, mostly Canada.

Then came Skip’s article followed by first my departure from the paper, then his. He went to London where my second son, Matthew, was born in 1973 and worked for Jim Bailey’s Drum during Britain’s three- day week. 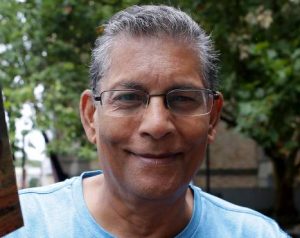 Bailey said in Nairobi that I’d travel the continent as a roving features writer.

I ended up in a cold, damp, miserable Victorian office over a post office in Fleet Street editing semi-literate copy from West Africa by candlelight because of the three-day week that year while Bailey waltzed around London telling his upper-class friends that Drum was so successful because he had, in his words, “removed the hand of whitey.”

To make matters worse, I was appointed the magazine’s Aunt Dolly and had to interview cover girls, a lot of them were hookers from Soho posing as innocent young fresh-faced African girls for the cover of Drum.

For two years, I was Business Editor of the Times of Zambia and correspondent for the BBCs Focus on Africa programme edited by Israel Wamala and the Financial Times.

But all that’s another story.

In 1976 I worked in South Africa for The Star and Financial Mail and in September 1977 crossed Kipling’s great grey-green greasy Limpopo River to cover the end of the war there for first the Rhodesian news agency IANA and then Time magazine.

I had married a fellow journalist, Jane, in March 1978 and we planned to return to Europe soon after Rhodesia turned into Zimbabwe in April 1980. But things changed and we stayed on.

I wrote a book about my fascist childhood in1998 and enjoyed what Andy Warhol said we’d all have one day – fifteen minutes of fame.

It was my story about being brought up as a child and then teenage Mosley fanatic.

A week after my 17th birthday, I spoke at Trafalgar Square and fully supported Mosley’s policy which he labelled Europe a Nation / Africa the Empire.  After the war, Mosley stopped his campaign against Jews and switched to attacking the British Government for allowing tens of thousands of people from the Caribbean to enter Britain.

My book told the story about how Oswald Mosley used race hate as a way of furthering his cause while protecting himself and his family, thanks to well -paid clever lawyers.

His working-class followers – people like my own parents and almost everyone I grew up with – were thrown to the wolves and had to somehow start all over again while Mosley and his wife lived in The Temple of Glory outside Paris.

At the end of their lives, both Oswald and Diana Mosley said that they were never anti-Semites. It was their followers who hated Jews. That was a strange reversal of the Führerprinzip.

When it was published, my book was praised by most British critics and reviewers with the then Archbishop of Canterbury, Dr Rowan Williams, suggesting it should be widely read by young people to help prevent a return to the race hate of the 1930s and the years after World War Two.

The famous British columnist Yasmin Alibhai-Brown said in an article headlined “Racism and the truth about the Ugandan Asians” (The In-ependent August 5, 2002) that in 1972 some of the old people in the country where she was born were unable to talk about the humiliation they went through. She quoted Paul Theroux who was in Uganda in 1967 and who wrote – “I believe the Asians to be the most-lied about race in Africa; the reactions of most Africans and Europeans in East Africa to the Asian presence are flagrantly racist.”

She paid me a warm compliment while promoting me to a position I never held – ”Trevor Grundy, the white editor of the Kenyan newspaper The Nation, was also well known for his support of Asians in the face of some hideous black and white prejudices.”

I don’t recall doing much to help Asians or Africans.

But I do recall a famous song by the Beach Boys that makes me think of the roller coaster years I had in Africa; a song called God only knows what I’d be without you.