Despite warnings from the WHO, the British Government was painfully slow to organise a national lockdown. Picture shows  some of the 250,000 people who gathered at  the Cheltenham  racing festival between  March 10-13, 2020 . An editorial in the New Statesman said that it was “absurd for the UK to continue to permit mass gatherings” after Italy imposed a national lockdown on March 9. Ten days after that, Prime Minister Johnson said: “We can send coronavirus packing.”

London, April 30  – – – With the news of a further 756 deaths from the Covid-19 virus over the last 24 hours (April 29, 2020)  there is medical and scientific evidence that Britain must expect an epidemic worse than any other developed country other than the United States of America.

The latest death toll – which for first time includes the number of deaths from communities and care homes – brings the total so in the UK to 26,097.

But for various reasons there has been an update time lag so that number will probably be raised later today.

An editorial in the mass-circulation Daily Mirror on

the government’s handling of the coronavirus crisis

And deaths in Britain’s 21, 723 care homes for the elderly could soon exceed those in hospitals as campaigners claim that residents – who number in their hundreds of thousands – are being treated as second-class citizens.

Now, it has been revealed (at an evening coronavirus press briefing at Downing Street on April 29) that the government is not supplying the necessary protective material to hospices.

Sir David Spiegelhalter, a statistician from Cambridge University, told The Times –“What we are seeing is a massive increase in deaths.”

Given the lag in the data, he said it was possible that coronavirus deaths in the care homes now exceeded those in hospitals, with both running at about 400 a day but heading in opposite directions – deaths in hospitals down. Deaths in care homes up.

He added: “While hospital deaths are steadily decreasing, there is no sign that we are past the peak in care homes.”

With death figures mounting, there is growing anger that the government has done a pitiful job providing frontline health workers with the right clothing and equipment to protect them.

Over 100 nurses, doctors and health workers have died while fighting the virus. And that’s a conservative estimate.

“There is no excuse for not having adequate stockpiles,” John Ashton, former professor of the Faculty for Public Health, told a BBC reporter on the Panorama programme last Monday night.

“You need everything to protect you against this kind of virus. It’s breathtaking that there were no gowns at all in store. Breathtaking.” 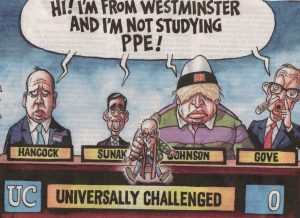 is a popular degree course for students hoping for

On the same day, a poll by the Royal College of Physicians found that a quarter of doctors have to re-use protective kit meant to be used once – and once only.

A front-page report in the conservative-minded Daily Mail by health editor Sophia Borland quoted the college’s president, Professor Andrew Goddard, saying that the survey revealed “a terrible state of affairs” because officials failed to buy enough gowns when setting up an emergency stockpile in 2009.

Ministers are also accused of ignoring a warning last June that they would need to purchase more.

The Royal College’s poll found that 27 percent of doctors were re-using their personal protective equipment, or had done so.

Goddard said: “That so many people have to re-use PPE (Personal Protective Equipment) shows how desperate the shortage is. This is truly a terrible state of affairs. As a bare minimum we expect our health service to provide the equipment we need to protect ourselves and our patients.”

And it wasn’t just a shortage of gowns.

The government didn’t plan to buy protective masks, visors, swabs of body bags – in spite of the fact the political mandarins had sufficient warning to know a pandemic was just around the corner.

The government claims it has delivered a billion items to the NHS.

A lot of them are gloves (counted individually and not in pairs) and plastic aprons not much different you’d wear doing the washing up.

The Panorama programme showed that the public was alarmed and keen to help unprotected NHS workers by sending them items such as swimming pool and motorbike goggles.

To cope with the shortages, some nurses use bin bags as aprons and put plastic bags over their heads.

Boxes arriving with “fresh” PPE equipment have labels indicating everything is fresh and ready for use. But peel away some of the sticky labels and you will find the expiry date written – 2016.

Millions of viewers saw this on Panorama.

For almost a decade scientists have known that a pandemic like this was on its way.

Said Professor Ashton: ”The consequence of not planning, not having stockpiles is that we are sending into the frontline doctors, nurses, other health workers and social care workers without the equipment needed to keep them safe.”

At the start of February, the European Centre for Disease control issued a warning advising the Boris Johnson government what were needed – respiratory masks, visors, eye protectors, gowns and gloves.

One medic al doctor, Agorista Baka, told the BBC that the government had four weeks to get ready and the consequences of if ignoring the threat were devastating.

Doctors and nurses told Panorama that they had been told to keep quiet and not say anything about the shortage of vital equipment.

Dr Abhi Mantgani said: “People in the health services are losing their lives. It is something that keeps me awake at night. I wouldn’t be prepared to work without an appropriate mask, eye-shield and a gown and I wouldn’t ask my staff to do that.”

Other health workers let their voices be heard but not their faces seen.

One    nurse said-“We have been told not to talk about shortages. They don’t want people to know how bad it is.”

Another said: ”There is a complete lack of transparency by the government. They’re creating panic because we do not know if they can supply us.”

During the Panorama programme it was revealed for the first time that in January 2020 the country’s health services coded Covid- 19 what is called a high consequence infectious disease.

Yet, six weeks ago, the government downgrade Covid -19 and the most consequential disease of the last 100 years was taken off the list.

Now, the government says all health needs are being met – aprons, alcohol hand tubs, gloves and eye protectors only.

Said Professor Ashton:”This must have been done because the realised that there weren’t going to be enough equipment and they needed, somehow, to have a story that stacked up with actually being caught out on supplies.”

One nurse was outspoken.

Lib Nolan, a trade unionist, said that more and more of her colleagues would die because of government’s failure to stockpile.

But whatever the criticism, however lethal, government ministers leave no cliché un-used.

They are working round the clock, leaving no stone unturned, working until the cows come home, moving heaven and earth  . . .

He told Panorama   that his company was not contacted by any MP or government official. So he approached the government in March and explained what his company could do for the NHS. There was no official response. Now that company sells top quality fabrics to the Americans. “We want to support the NHS that that’s where this material is now going,” he said.

The Panorama reporter said that every Thursday night at eight o’clock the nation’s doors open and men, women and children stand on the pavement clapping the dedicated NHS workers.

But he said that many doctors and nurses felt that this massive show of support – while appreciated by grass root health workers – covered the government with a kind of gloss, a show of public approval not only for the NHS but also for the Johnson Government that has promised so much and achieved so little.

But whatever is said, more and more people in this country are echoing the question raised on Monday night by Panorama – 2Has the Johnson Government failed the NHS?

You don’t have to ask Dominic Minghella, a TV screenwriter and producer, that question twice.

He caught and then beat Covid -19 virus but is furious that the government did next to nothing to protect health workers months ago.

Writing in the New Statesman magazine (24-30 April) he said that precious days were missed to test and trace between March 12-23.

The 23rd was the day Johnson announced lockdown.

Minghella said it was only then that the government realized that its “herd immunity” bright idea to beat the virus might have cost Britain 250,000 lives.

He writes -”What did those 11 days of the government standing frozen in the headlights costs us? How many lives lost?”

He said that it’s the duty of everyone in Britain to stand up and speak out and condemn the Conservative government for its delays, for its lack of planning and above all for its failure to admit  it was wrong from the start.

He urged people to speak the truth.

“If anger ensues – and how could it not – feel it. Direct the blame. Hold those responsible to account. If anyone tells you not to politicise the issue or that ‘now is not the time’ ignore them. They are gas lighting you.”

“Those 11 days shows us that out government has form. Let to its own bewildering devices, it makes terrible decisions.

“It is up to all of us to challenge, to question, to argue, all day long. It is not “unhelpful” or unpatriotic or whatever else the gas lighters will say.

“It is out right, our duty. Our lives, our friends’ lives, our families’ lives may depend on it.”