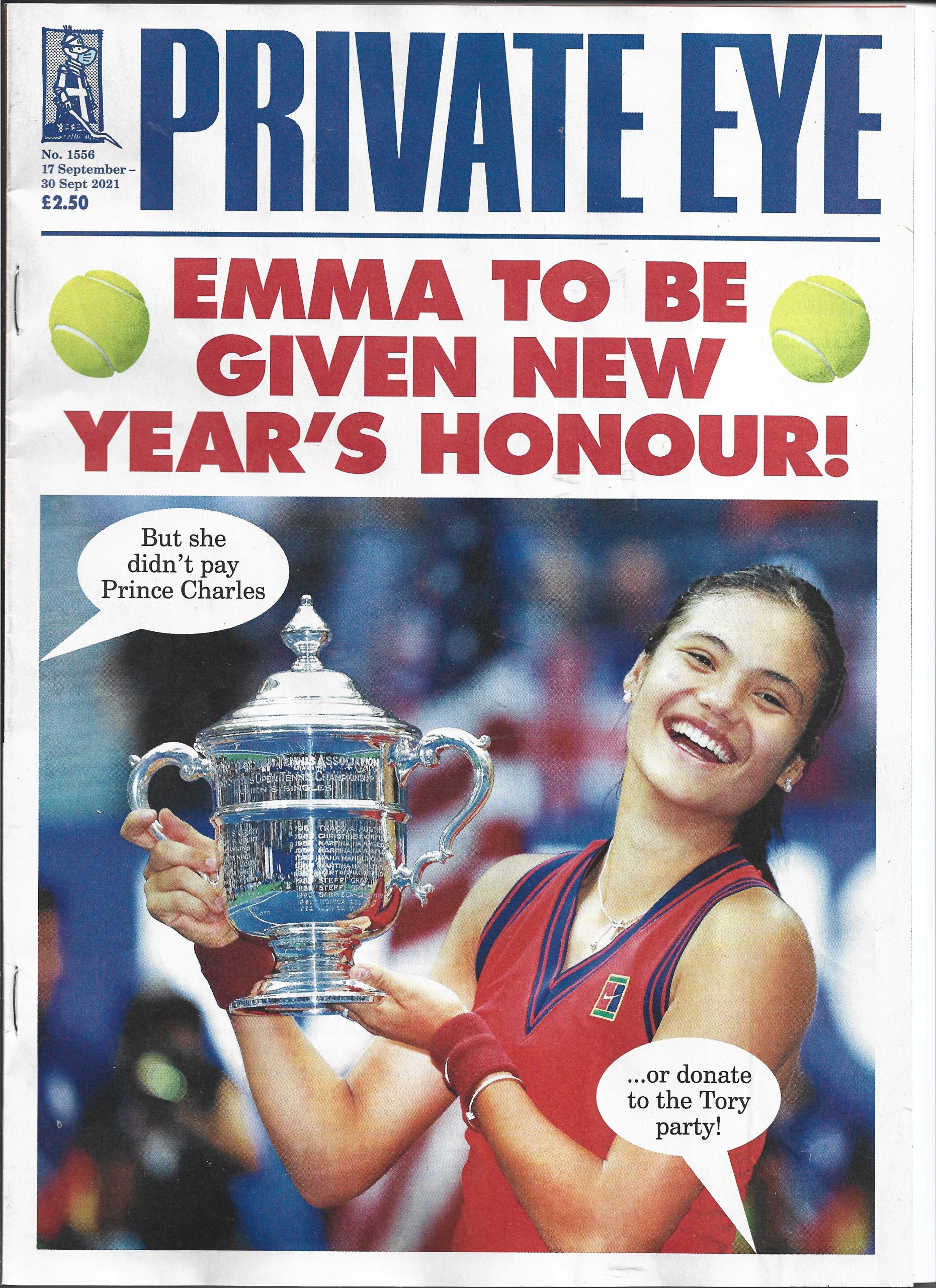 Emma Raducanu, winner of this year’s US Open – Picture from front page of Private Eye 17-30 September 2021

On the BBC’s flagship radio Today, presenter Nick Robinson asked Transport Minister Grant Shapps how comfortable he was with the news that if you pay £250,000 to the Conservative Party’s little until now known Advisory Board, you are guaranteed regular secret meetings at Downing Street with either Prime Minister Boris Johnson, or Chancellor Rishi  Sunak . . . or both.

After much muttering with the odd “hold on, hold on” chucked in for good measure, Shapps said – “I’m not involved and haven’t seen the story. But what I can tell you is the party very, very carefully adheres to whatever the rules and regulations are in terms of donations and do so to the letter.

NR:  There is a Conservative Party Advisory Board (as revealed by the Financial Times) and the Party has told us it’s for an update on the political landscape. Are you comfortable with the idea of writing a cheque for a quarter of a million pounds that grants you regular secret access to the two leading members of government?

GS: Look, as a country you have to make a decision about how you’re going to fund your politics. You’re either going to say ‘we’re going to tax people in order to fund political parties’ or you have to fund raise. And when you fund raise, people should understand it doesn’t give you a say over anything that goes on in government. But, of course, you’re very welcome to hear about our policies and what we plan to do.

NR: They must be fantastically naïve, these very rich men. Do you really think they got that rich by writing cheques (GS: ‘Hold on! Hold on!’) for a quarter of a million pounds to have influence over nothing?  Do you think they walk into the room in Downing Street with the Prime Minister and the Chancellor and think it’s just possible that a quarter of a million pounds would get them a hearing?

GS: There are a lot of people in this country who believe it is a country they want to see prosper and may have views about the things to do that make the country prosper. And so, supporting a party should not in, in my view, be painted as some sort of immoral act.

The story about how well-meaning and very concerned about Britain men give massive sums of money to a political party has become sensational news here.

Thanks to the Financial Times.

That paper revealed that men with huge sums of money don’t just get to meet Johnson and Sunak.

If they’re lucky and have enough money, they get to meet Prince Charles, heir to the British throne. How many times that has happened thanks to Ben Elliot isn’t known just yet.

He has excellent royal connections. Camilla, wife of Prince Charles, is his auntie.

He is joint chairman of the Conservative Party (appointed by Boris Johnson in 2019) and head of a concierge company called Quintesentially which caters for the requirements of the world’s richest people, yachts, contacts, weddings, funerals, pop concerts, meeting heirs to thrones. And whatever else they like doing with their boodle.

All his Elliot’s clients are in the massively wealthy class.

One of most loyal and generous clients is the telecomms billionaire Mohammed Amersi who, thanks to Ben Elliot, was able to fly to meet Prince Charles in Scotland in 2013 and talk about how bet to make deprived people lead better lives.

Until this week, few people had ever heard of Ben Elliot, an old Etonian, like Boris Johnson.

One of his many spokespeople said that he assisted the billionaire in meeting the prince because “he wanted to support the prince’s charitable work.”

But a report in The Times (August 2, 2021) wondered if that was so and said that prince Charles now fears he is collateral damage amid this growing row over Tory fund-raising tactics.

Another, in the Sunday Times, said Elliot faced questions at a meeting of the 1922 Committee of Tory backbenchers about why the billionaire Richard Desmond (owner of the right wing plus Daily Express) came to be sitting next to the Housing Secretary, Robert Jenrick, at a fund-raising dinner. It was before the government ruled on Mr Desmond’s  development plans which saved this multi-millionaire an undisclosed sum.

Who you sit next to is becoming big business in Britain.

Musical Chairs is a game for seven years olds at parties.

But even primary school kids know you might lose your seat when the music stops.