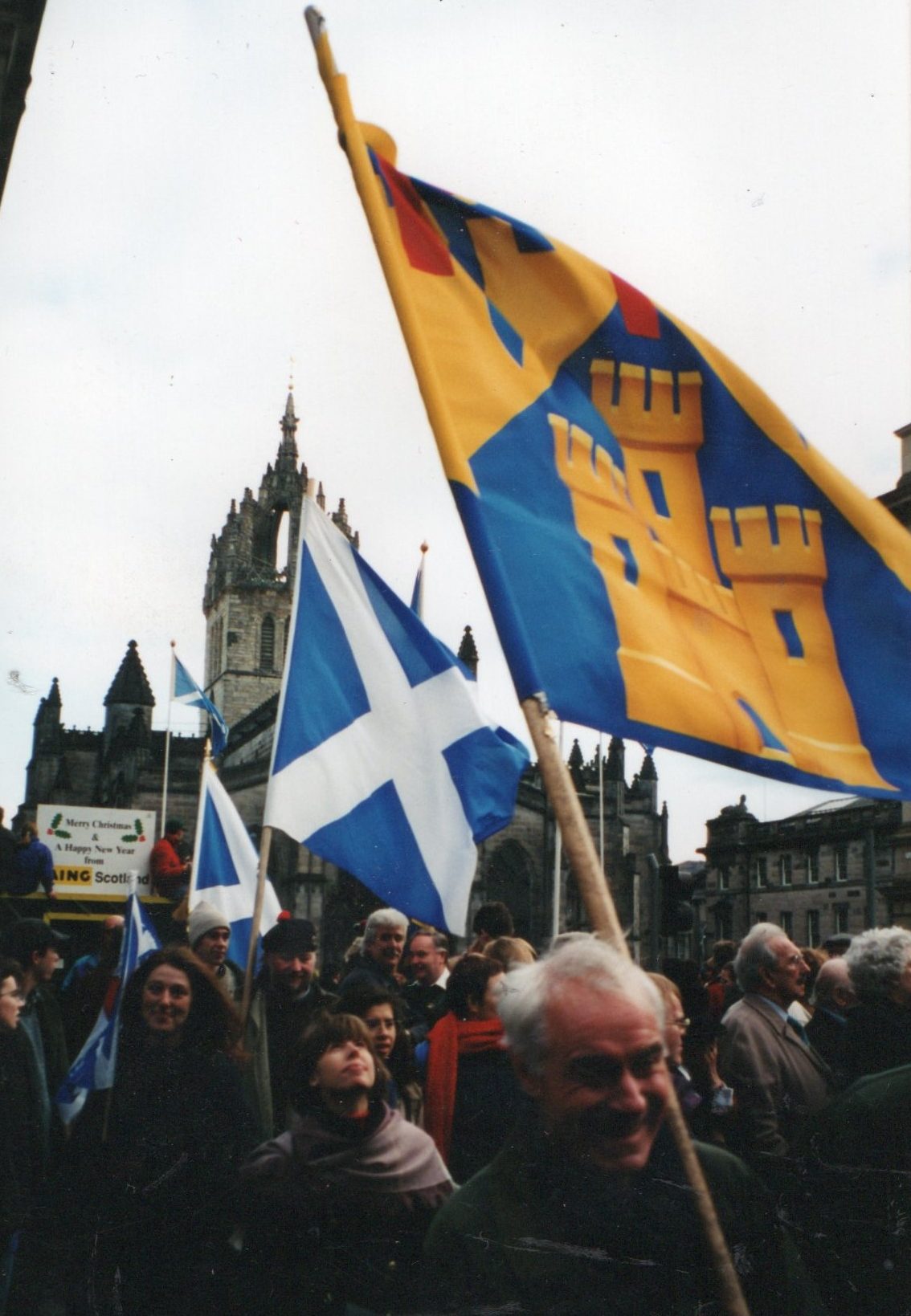 The UK Government today (January 14, 2020) turned down a request made by Scotland’s first Minister, Nicola Sturgeon for a second referendum that could lead to Scotland’s independence and the break-up of the United Kingdom (UK). 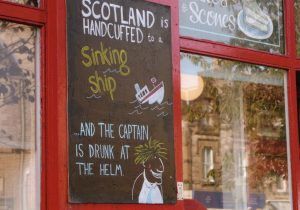 Scotland handcuffed to Boris Johnson? The owner of a shop in Portobello outside Edinburgh thinks so (Picture: Trevor Grundy)

Johnson that a second referendum would lead to what he called the continuation of further”political stagnation Scotland has seen for the last decade.”

The Conservative leader said that before the first referendum in 2014 both Sturgeon and the then Scottish National Party (SNP) leader Alex Salmond said that it would be a once in a generation vote.

The SNP leader wrote to Johnson on 19 December 2019 to request the powers to stagfe anothjer referendum under section 30 of the 1998 Scotland Act.

The SNP won 47 of the 59 Scotland seats in Westminster at the 2019 general election.

Said Johnson: “The UK government will continue to uphold the democratic decision of the Scottish people and the promise you made to them. For that reason, I cannot agree to any request for a transfer of power that would lead to a further independence referendum.”

Responding to Johnson, Nicola Sturgeon tweeted that the move was aimed at denying democracy to the people of Scotland who she says do not want to leave Europe and who do not want to be told how to think by a collection of Conservative politicians in London. “It is not politically sustainable for any Westminster government to stand iu the way of the right of the people of Scotland to decide their own future and to seek to block the clear democratic mandate for an independence referendum.”

She said that the Scottish government would set out its next steps this month, when it will ask the Holywood parliament to again endorse the  staging of a second referendum.

Last Saturday in Glasgow, over 100,000 people defied wet and windy weather and joined a march organized by All Under One Banner (AUOB).

The Scotland editor of the BBC, Sarah Smith, said (14 January, 2020)  that Nicola Surgeon knew before she asked for a second referendum what Boris Johnson’s reaction would be – a resounding  “No”.

The respected political commentator predicted this would turn into a  constitutioanl battle “that is going to rage on and on.” 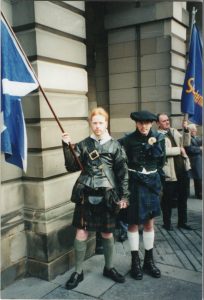 Young Scots with the national flag in the Royal Mile, Edinburgh

She said: “You’ve got the prime minister who thinks that he can refuse to allow another referendum without provoking a major backlash in Scotland, where voters are split about 50:50 polls suggest on whether or not to support independence . But threre’s not, at the moment,  a really widespread demand for another vote.

“On the other hand, you’re got Nicola Sturgeon who thinks that she can win voters over to her side by continuing to make the arguments about a democratic deficit that Scottish  voters are being igored over Brexit and being refused the right to decide their own future within the UK.

“She hopes that the longer the  prime minister refuses to allow an independence referendum, the more support for independence will grow.

“The  Conservatives are very well aware of the risk and they’re coming up with plans to inrease spending and new initiatives to try and build support for unity in Scotland.”

The next Scotish Parliament election is due to be held on 6 May 2021 to elect 129 members to the Scottish Parliament. It would be the sixth election since the parliament was established in 1999.

Iain Martin of “The Time”s writes ( 17th January 2020): “If the SNP wins an overall majority of the seats, or more than 50 percent of the popular vote, it will be extremely difficult for unionists to say with any authority that the nationalists lack a mandate for their core policy.  Unionists  might as well face it. If Nicola Sturgeon gets a majority next year, there is going to be a referendum at some point, so it is best to work out now  how best to make the case for Britain.”

Scotland has had a close relationship with Europe for hundreds of years and it will not easily be broken.

Trade was the cement that bound Scotland to Europe, as the journalist Chris McCall explained in an article written in July 2016.

The Auld Alliance between the medieval kingdoms of Scotland and France remains the best known example of Scots-European diplomacy. 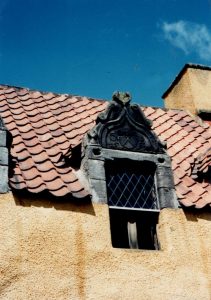 Roof and windows at the picturesque Scottish

The alliance stems from an agreement f

irst signed in 1295 between Scots king John Balliol and Phillip IV of France. It promised each country could rely on the other for military help if it was invaded by England, and was renewed regularly over the next 250 years before being ended by the 1560 Treaty of Edinburgh.

Several Scots nobles found themselves lucrative positions in the French court, while Scottish soldiers were in high demand and saw regular action fighting under the French flag. Between 1419 and 1424 alone, when Henry V of England was close to conquering the French kingdom, some 15,000 Scots troops were sent to assist the Dauphin, Charles VII.

This help was not forgotten. In a speech given in Edinburgh in 1942, Charles de Gaulle said: “In every combat where for five centuries the destiny of France was at stake, there were always men of Scotland to fight side by side with men of France, and what Frenchmen feel is that no people has ever been more generous than yours with its friendship.”

The distinctive pantile roofs and crow-stepped gables found on traditional coastal buildings in Fife are a visual reminder of a time when small burgh ports like Culross and Anstruther were important trading hubs with lowland Europe.

Boats carrying exports like salted fish and wool to Flanders in the late 17th centuries would return loaded with pantiles as ballast – a luxury item when the roofs of most Scottish homes were still thatched.

The crow-stepped gables – known in Fife as corbies – are similar in style to those found on Flemish buildings.

Bruges in Flanders became the first Scottish ‘staple’ port – allowing it to exclusively import and store Scottish goods – in the 15th century. The contract switched to Middleburg, Zeeland, in 1518, but by the late 17th century Rotterdam had established itself as the most important trading port for Scots.

By 1680, there were more than a thousand Scots living in the Dutch city.

Examples of the homes once occupied by Scots merchants in Lowland ports still stand. The ‘Scottish House’ (Schotse Huizen) in Veere dates from 1539 and is today a museum. Its pantile roof survives.

Links between Scotland and Poland date back to the late 1400s when trade agreements were established between Aberdeen and the old Baltic seaport of Danzig, now Gdansk.

An estimated 30,000 Scots moved to Poland to seize new business opportunities in the 250 years that followed – some affluent merchants and men of influence and others the peddlars who travelled the countryside selling hankies, scissors and sewing pins. Some were escaping poverty and others anti-Catholic persecution.

By the 17th Century Poland was known as ‘Scotland’s America’ and under King Stefan Bathory, Scottish merchants became suppliers to the royal court in Krakow.

Among the Scots to make their fortunes in Danzig was Robert Gordon. He later returned to Scotland and gave money to build a hospital in his name which is now known as Robert Gordon University.

Although today known as a peaceful country famed more for interior furnishings and pop music than military expansionism, Sweden was in the 17th century one of the dominant powers of Europe. Its empire included Finland and the Baltic states, stretching into what is now Russia.

The regular battles it waged on mainland Europe required huge amounts of troops – and Scots mercenaries were quick to enlist.

Among those to serve in the Swedish royal army was Alexander Leslie. The distinguished officer served during the Thirty Years’ War and returned to Scotland to take command of the Scottish Covenanter army in 1638.

The port town of Gothenburg was a particular home from home for Scots. Just a few days sailing from Aberdeen, it provided the ideal trading base for merchants operating across the Baltic Sea.

The Scots enclave in the city was so prominent it was granted two seats on the town council in 1621.

From The Times of 31st January 2020, the day Britain  leaves the European Union:

Nicola Sturgeon will today seize on this as she sets out her next steps in the campaign for independence in Edinburgh. “We have a cast-iron democratic mandate for an independence referendum and the latest polling shows a majority back Yes,” she will say.