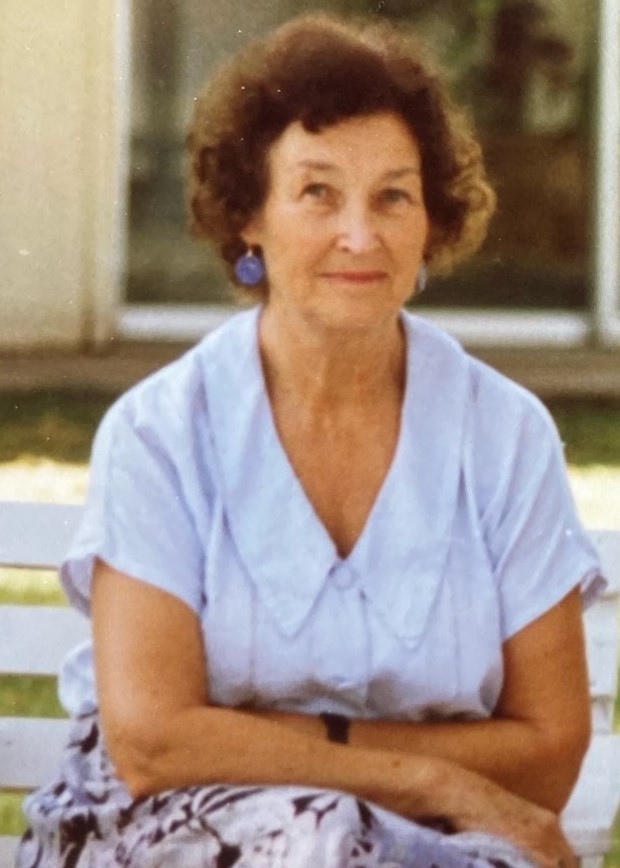 Barbara Hall MBE, doyen in the world of crossword compilers and editor of a book that helped whites in Africa understand more about the people they lived alongside but who they hardly knew other than as servants who they employed or armed men they feared.

Barbara Hall MBE died at her home in South London on Monday, April 18.

It was sad but also perhaps significant day for her to slip away because it marked the 42nd anniversary of Zimbabwe’s independence.

Though many of her immediate neighbours probably didn’t know it, Barbara Hall and her late husband, the journalist and author Richard, played their part in the liberation of large parts of Central and Southern Africa from the time they arrived on the Copperbelt in 1955 to their departure from Zambia in 1967.

“The best and most meaningful years of my life were spent in Zambia with Dick and the boys,’ she told me during a long and fascinating interview I had with her at her home in south London in the Summer of 2015.

She laughed when she told me that after the birth of another son, she and Dick decided to seek adventure somewhere away from England.

But off they went and their great adventure followed with Richard Hall going on to become one of the African continent’s best known and most respected journalists and authors.

Barbara Hall’s contribution to journalism was at a much lower level but she did have what Andy Warhol called ‘fifteen minutes of fame’ after the publication of a most amusing and valuable book about social attitudes in Northern Rhodesia on the edge of Independence in 1964.

It was titled Tell Me Josephine, extracts from letters sent to the Agony Aunt (ie., Barbara Hall) of the Central African Mail which was then edited by Richard Hall.

The foreword was by Zambia’s first president, Dr Kenneth Kaunda, who was concerned about the way traditional life was falling away throughout Africa.

‘Our values are falling away,’ he wrote, ‘ and little that is solid exists to replace them.’ 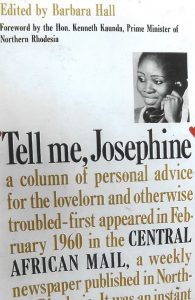 The book was translated into nineteen languages and became a best seller in Sweden.

Barbara Hall received an MBE from the Queen in 2007 in recognition of her services to the newspaper industry.

‘I was shocked and amazed and asked myself what I’d done to deserve such an honour,’ she said. ‘I was known as a crossword compiler, rather than a journalist. But I did write for Dick’s papers and magazine and (again with a broad smile on her face) . . . not that he ever paid me!’

Three years after receiving the honour, Barbara, at the age of 87,  retired from the Sunday Times, ending a career that had turned her into the doyen of the crossword compiling world.

She smiled and said –

‘I‘m 92 now and to tell you the truth,  I was compiling one when you rang from  the station this morning.’

Barbara Hall was born in Derby, England in February 1923 and grew up in the small village of Aston-on-Trent.

‘There were no black people where I came from,’ she told me.

‘The first time I ever saw a black man was when my father took me to London. We went to Speaker’s Corner at Hyde Park and listened to a man who called himself Prince Monolulu.’

The ‘prince’ was a racing tipster and until his death in 1965, was probably the best- known black man in Britain. 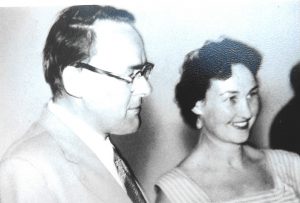 Barbara Hall was close to her parents.

In the first world war her father, Lawrence Shelton Taylor served as a radio operator and navigator. At the start of the second in 1939, he re-joined the RAF as a reservist and trainer.

Her mother, Olive Taylor (nee Bradbury) served during World War One on the Western Front in the Women’s Auxiliary Army Corps and worked in the Second World War as a Braille teacher.

Barbara Taylor attended a grammar school in Derby and had her first crossword published in the Northern edition of the Daily Mail when she was fifteen.

After school, she hoped to become an elocution teacher having been accepted to study at the London Academy of Music and Dramatic Art but the war changed all that.

From 1941-1945 she served with the Women’s Royal Naval Service, working as a coder. After the war and her marriage to Richard Hall she developed her skills as a crossword compiler and continued writing.

In 1955 the large Hall family moved to Northern Rhodesia where Richard edited mining magazines and gained an insight into what caused black anger against whites and the African hunger for freedom and an end to the hastily put-together Central African Federation (CAF) which joined, in loose alliance, three African territories, the two Rhodesias and Nyasaland.

CAF was a British invention, its last throw of the dice to preserve white rule under the false guise of partnership. It started in 1953 and ended a decade later in December 1963.

For three years after Independence (October, 1964) Richard Hall was close to Kenneth Kaunda.

But in 1967 the ruling party’s militants branded Richard Hall as a ‘stooge’ of colonialism after a particularly nasty incident in Lusaka involving an Italian butcher and the wife of the Vice President of Zambia.

The family packed up and left. Richard Hall went on to write well-received books. HIs wife started a career as a crossword compiler at the Sunday Times.

After her retirement, she lived in a large house in south London where she died on April 18 at the age of ninety- nine, a fine mother and grand-mother as well as a true friend to so many people round the world, a woman with an undying love for Zambia.